Me, I've always been a fan of Christopher Nolan more than I have Batman. Don't get me wrong, I was wowed by the reinvention of Batman Begins and the wallop of The Dark Knight, but I'll always choose the sleight-of-hand of The Prestige or the cerebral jolt of Inception given the choice. The Dark Knight Rises is a stunning piece of work, gigantic in scale with hugely ambitious themes, but Nolan's contribution to the Batman legacy – and indeed the superhero genre as a whole – is to make these films more about the men behind the masks than the heroes they portray: the guys who make the magic happen.


Considering the pace at which the previous film ended, with Gotham's protector speeding off into the night, Rises takes an age to get going – you're almost an hour in before The Dark Knight even has a semi (this is a play on words regarding the movie's title – Batman does not get an erection in this movie). This is because Chris Nolan has been allowed to take his time, to be given room to let his characters breath – a billion dollars of box-office gives you that kind of leverage. Gotham's citizens plod about safe in the knowledge that Harvey Dent's 'noble' death has put a whole lot of crooks in jail. Batman hasn't been sighted for eight years; Bruce Wayne for marginally less ("I bet he's got long nails and is pissing in jars," jokes one of his employees). It's an inauspicious start to the most eagerly anticipated blockbuster in recent memory, bogged down in a mire of its own making; it may take the wind out of your sails.

But by golly, once the cogs start whirring and the machine starts to warm up, The Dark Knight Rises takes off like a rocket – with Hans Zimmer's propulsive score as its fuel. Bruce Wayne dusts off the Batsuit when a new tyrant hits town, via a preview-friendly prologue: masked hoodlum Bane is not only a monstrous physical specimen, but he's also well connected, is in possession of a devious criminal mind and has a ruthless determination that sees him pile up several henchmen corpses per week. What he doesn't have, however, is a particularly clear speaking voice; it's a good thing the characters in the movie are too scared to ask him to repeat himself. Despite an audio tweak here and there, still Bane's every third line is rendered gobbledegook amidst digital garble and background noise. It does tend to hamper one's villainy somewhat. 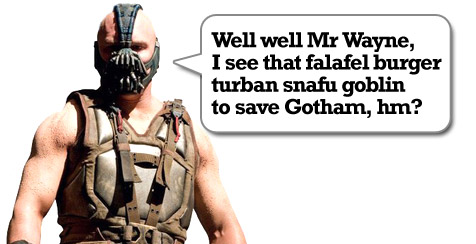 The Joker's absence leaves a big hole to fill, and as big as Bane is – and as interesting as Tom Hardy makes him – he can't quite fill it by himself. Anne Hathaway's Selina Kyle almost makes up the difference, just managing to justify her inclusion by virtue of her tricksy ways – neither hero nor villain, she's The Dark Knight Rises' true rogue element. Her screen time is pretty minimal, however, almost to the point that you forget she's in the movie until she returns, but Hathaway and her hips give the movie some swagger and a sense of fun that's lacking elsewhere. (Bane is not really one for magic tricks or pithy one-liners – he's more of a 'rip off your head and shit down your neck' type).

Heath Ledger's tragic death – and Christopher Nolan's refusal to address it on film – puts paid to any real roll-over from The Dark Knight to Rises, but the director wisely has his eye on Batman's past and not his future: with returning characters and arcs come full circle, it genuinely feels like a continuation and conclusion to the trilogy started with Batman Begins. Nolan commits to filmmaking on a massive scale, not just with large sets and countless extras, but with big thinking and vision – it's truly epic. It can't be faulted for spectacle, either. Where once there was one Tumbler, now there's a fleet of them. Localised union goons are now gun-toting armies with radicalised beliefs. It's clearly a conscious effort on behalf of Chris Nolan to widen the scope of the Batman universe – this time we even see the US President, played by Knots Landing's Wiliam Devane (my Mum will like that bit).

Gary Oldman's Commissioner Gordon continues to be given far more to do than his sort of role usually allows, ditto Joseph Gordon-Levitt's valiant cop John Blake. Michael Caine's Alfred is given licence to deal almost exclusively in tearful platitudes, but they have the desired effect. This is where all that great casting from 2005 really pays off – only Morgan Freeman's character Lucius Fox lacks any real narrative closure. 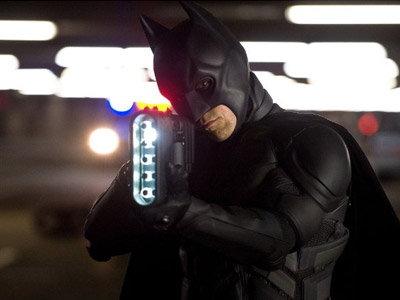 Batman has a ray gun, your character arc is irrelevant.


As big as The Dark Knight Rises' canvas is, it is ultimately about the mission of just one man. Batman is hardly in his own movie, used sparingly throughout; Bruce Wayne, on the other, is front and centre. Dragged through all of Gotham's hedges backwards and back again, he's railroaded by Bane's pain train but Bale plays him with just the right measure of sympathy and intensity ("I'm not afraid..." he tells Tom Conti [just go with it], "... I'm angry."). In what's possibly a superhero movie first, you're never really sure if the good guy is going to win this time – that's the complexity of Nolan's universe at play, darting this way and the next with a succession of sneaky twists and turns.

So, for all of the memorable moments, the cool flourishes, the bombastic scores, the stirring speeches and the big set-pieces, The Dark Knight trilogy concludes with singular focus. Doubtless flawed and arguably overlong, it's nonetheless a personal and heartfelt ode from the director to the greatest comic-book character ever committed to paper – and now film. Forget all the talk about more sequels and reboots, it's not what Batman does next that should excite you; it's Christopher Nolan you want to keep your eye on – the guy who makes the magic happen, the true hero of the saga.

More:  The Dark Knight Rises  Batman  Bane  Tom Hardy  Christian Bale  Michael Caine  Christopher Nolan  Anne Hathaway  Matthew Modine
Follow us on Twitter @The_Shiznit for more fun features, film reviews and occasional commentary on what the best type of crisps are.
We are using Patreon to cover our hosting fees. So please consider chucking a few digital pennies our way by clicking on this link. Thanks!