The Diary of a Teenage Girl

Bel Powley is a very arresting and idiosyncratic actor, so expect to see her playing a superhero's girlfriend pretty soon. For now though, here she is in a fairly straightforward yarn about a teenage girl who has a bunch of sex. It has some good visual ideas and does a nice line in chiding you for forgetting the seediness of its main relationship, but none of this quite elevates it above a decent watch.


Powley will be kicking herself first and foremost at not having made the effort to be sexually attractive enough for Jeff Wells. Leaving aside that Jeff's criticism amounts to her not getting him hard enough at the sight of a man claiming the virginity of a 15-year-old girl he's spent weeks grooming through the standard-pattern techniques of the serial child predator, Powley should take at least some solace in a job well done. As Minnie, a girl having an affair with Monroe, her mother's boyfriend, hers is a performance nuanced enough to include childlike and uncomfortably adult strands.

Still, it was the seventies, so sex with underage girls was totally fine, right? Well, yes and no. (Mainly no.) Point is, The Diary of a Teenage Girl uses the whole "it was a different time" argument, with which we're still wrestling in Britain while America has its own post-Cosby traumas still to come, to give a perspective on its story that allows us to get past our gut reaction and focus on Minnie's journey. It's not a clear path: she consents to the sex and instigates much of it, but there are hints that growing up in a household full of drug abuse and no steady father figure has led to this early promiscuity. 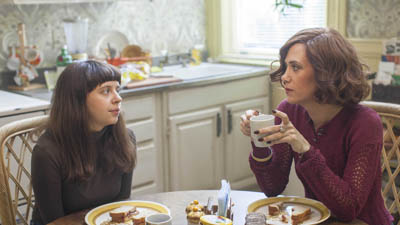 "So mum, does Monroe always do that thing where he..."


Blame the mother, right? Tough one. Charlotte's played by Kristen Wiig, whom it is medically impossible to dislike, and there's no easy lapse into the usual movie bad-mother tropes of apathy and inattention. Wiig pretty expertly gives you a woman who had a couple of sixties babies, and raises them well but wants to keep having the fun she had to curtail. We meet Minnie's previous stepfather, a psychiatrist, and infer the effect that his overintellectualised pipe-smoking analysis of child-rearing (fashionable at the time) would've had: a flashback shows him advising Charlotte that her normal tactile affection towards her daughter could convey a sexual subtext, and she stops.

Monroe (Alexander Skarsgård) is just as hard to get a handle on. His easy-going, playful side is suggested by director and actor as genuine. There is a scene in which he play-boxes with Minnie that seems on the surface like good stepfatherhood, but stresses the fine and calculated line trodden between playing as one would with a child and flirtation, slowly moving it from one thing to the other, straight out of the abuser's handbook. When he lets her drop to the floor the second Charlotte enters, the thud gets a laugh but it's born of discomfort. On top of it all there are animated superimpositions of Minnie's drawings, which become more and more sexualised as we go on. It's a fun flourish but not much else. 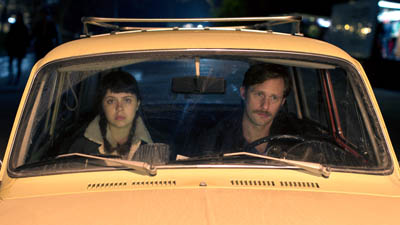 "Where are the sweets? You said there'd be sweets if I got in your car."

Minnie's was a sudden and alarming sexualisation, juxtaposed with some discomfiting childishness on her part which doesn't let you forget what you're watching, but most of the interesting stuff is over too quickly. Still, as it said on Jimmy Savile's headstone before they took it away and ground it up, it was fun while it lasted.

More:  The Diary Of A Teenage Girl  Marielle Heller  Bel Powley  Kristen Wiig  Alexander Skarsgard  Madeleine Waters  Christopher Meloni  Abby Wait
Follow us on Twitter @The_Shiznit for more fun features, film reviews and occasional commentary on what the best type of crisps are.
We are using Patreon to cover our hosting fees. So please consider chucking a few digital pennies our way by clicking on this link. Thanks!