Jokes are funny, aren't they? I don't mean in the 'Ha ha, Jimmy Carr is totes a legend LOL' kind of way; more I find them a strange way to get a laugh – painstakingly constructing sentences and cadences to maximise hilarity. It's a far more traditional, way more precise craft than surrealist, situational or observational comedy, and not one that's overly-familiar to Sacha Baron Cohen, who has thus far mostly traded on the comedy of embarrassment – the exquisite awkwardness that hidden cameras and unsuspecting participants provide. The Dictator represents his return to scripted comedy after the Borat/Bruno double-header, but any fears that Cohen's appeal would effectively be neutered while working with a safety net are swiftly allayed – this showcases his talents on the page as well as on the screen.


Admiral General Aladeen doesn't have the same lovable qualities as clueless misfit Borat and isn't half as cringey as Bruno, nor does he generate the same instant reaction – as a comedy character, he's pretty one-note and hardly likely to inspire the same following as Cohen's previous personas. Thankfully, Cohen – and co-writers Berg, Schaffer and Mandel of Curb Your Enthusiasm fame – place him smack bang in the middle of several highly memorable comedic bits; ludicrous routines that fit the actor's comic sensibilities like a glove. 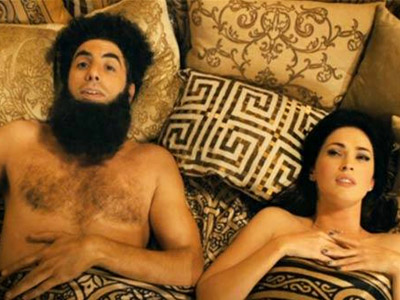 
The Dictator is comedy at its broadest, but underneath the 'hilarious' beard and predictable September 11th gags lies a sharp script that attempts to aim lowbrow and highbrow at the same time – and almost pulls it off. One scene sees Aladeen and his sidekick Nadal (Jason Mantzoukas) cut the head off a corpse to steal his beard. It's a crass sight gag that gets a laugh, but the bigger laugh comes once your guard is let down and it makes an immediate reappearance in the next scene. That mixture of crowd-pleasing gut-laughs and expert comedic timing is evident throughout: just when you think it's as dumb as a bunch of rocks, it gives you a wink and a tip of the cap.

For every joke that flies a little too close to the twin towers of bad taste (and there are several), there are delightful sight gags and physical humour to enjoy. In general, The Dictator is too goofy to truly offend (even if one Wii joke seems included purely to get a rise out of you) but it is more than willing to go 'trad' in order to mine humour. Slapstick and silly language jokes (i.e. making up fake names by reading nearby signs) feel like a relic of a bygone comedic era, but Cohen has the right Python-esque quality about him to pull it off. Not that you'd ever see a Python movie in which Michael Palin shits on a woman's head from a great height.

Grade-A absurdities are The Dictator's strongest suit, and the movie is at its funniest when it's off on mad tangents (like a touching romance that starts wrist-deep in a pregnant woman's vagina). The plot, and indeed the supporting cast, are largely forgotten for the most part, though Anna 'It's actually pronounced Arna' Faris' boyish love interest does raise a few giggles, or at least Aladeen's various descriptions of her does (I noted "midget in a chemo wig" and "lesbian hobbit" among the best). Ben Kingsley basically copies and pastes his character from Prince Of Persia for all the good he does. Nope, it's the Sacha Baron Cohen show and all the stronger for it. 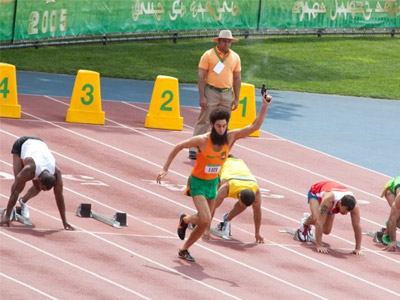 Write your own joke about 'race hate', I'm tired.


Aside from a last minute, pre-credits dedication to North Korea's dearly departed leader Kim Jong-Il, The Dictator feels like it was written pre-2011 – the year in which Bin Laden, Gaddaffi and Mubarak fell. Cohen's timing is both topical and woefully unfortunate – there is definitely room for a satire on the modern despot, but The Dictator is too busy on more trifling matters. Not that it's really a missed opportunity – Cohen sets his target on a different audience, who need placating with physical and not political humour. Silliness works in the movie's favour, but The Dictator does not have much to say.

Unlikely to be remembered as one of Cohen's best, The Dictator is nonetheless far funnier than the trailers made it out to be – and considerably more enjoyable than its lead character would suggest. Crucially, it's proof that Sacha Baron Cohen can actually do jokes – here's hoping that one day he'll create a character who deserves them.

More:  The Dictator  Larry Charles  Sacha Baron Cohen  Anna Faris  Megan Fox  Ben Kingsley
Follow us on Twitter @The_Shiznit for more fun features, film reviews and occasional commentary on what the best type of crisps are.
We are using Patreon to cover our hosting fees. So please consider chucking a few digital pennies our way by clicking on this link. Thanks!