The titular poser sees Vince Vaughn lumped with a dilly of a pickle. Hard at work with best friend Kevin James on creating a "non-gay" electric car, Vaughn spots his buddy's wife, Winona Ryder (*cough* bullshit), making out with another man. Should he come straight out with the bad news, or wait until their big-money deal has been sealed? And how does all this affect his relationship with long-term partner Jennifer Connelly? 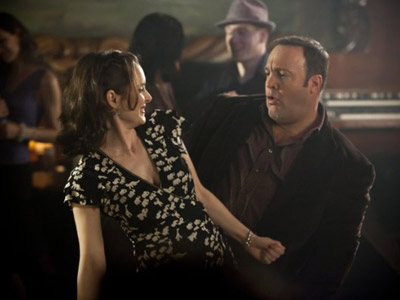 
Obviously, the answer to that question is yes, he should tell him straight away, and yes, he should probably have told his missus too. But this is a movie, and normal rules don't apply: there are 90-odd minutes to fill before the hugging and the learning. So, Vaughn pads out the run-time by spying on Ryder's lover (Channing Tatum as a douche called Zip), pondering over a potential proposal and making life far more difficult for himself than he ever really should have.

It chugs along nicely enough for the most part. The Dilemma requires Vince Vaughn to actually act and not just talk at 100mph, so it's nice to see him let loose once in a while - given the chance to use his, er, considerable girth in a fight scene, he comes across as genuinely threatening.

Kevin James (aka The Human Thumb) is surprisingly funny when he's not being forced to constantly fall over like he suffers from some horrendous inner-ear infection, while Jennifer Connelly makes the most of what could have been a meaningless role. Only Winona Ryder get a short shrift from the script, written as an evil, conniving shrew when perhaps her motivations deserved slightly more exploration. She gives good bitch, anyway. 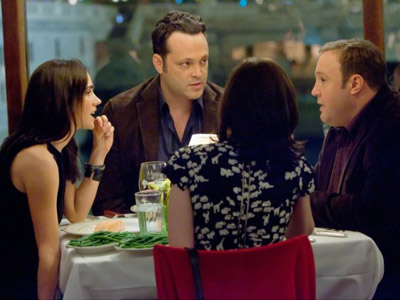 How many fucking green beans does your table need?


Sadly, when things inevitably boil over, characters behave irrationally, get angry at the wrong people, needlessly withhold information from one another and generally stomp around for no other reason than to create artificial drama. Vaughn's mature relationship with his girlfriend is welcome, but there was no need to create a rift between them - not every movie relationship has to have a last-act hurdle to overcome. Come the overwrought climax, it's all about as emotionally authentic as an episode of EastEnders. (*drum beat*)

It's a strangely subdued film, certainly not the kind of picture you'd expect full-time Oscar-botherer Ron Howard to be involved with. It's guilty of taking a few liberties where believability is concerned, but it makes a good go of squeezing laughs out of a potentially LOL-free situation.

However, it never answers this truly taxing question: how would Jennifer Connelly survive her nightly crushing beneath mega-tonne love machine Vaughn? She'd be like dough under a rolling pin.

More:  The Dilemma  Vince Vaughn  Kevin James  Jennifer Connelly  Winona Ryder  Ron Howard
Follow us on Twitter @The_Shiznit for more fun features, film reviews and occasional commentary on what the best type of crisps are.
We are using Patreon to cover our hosting fees. So please consider chucking a few digital pennies our way by clicking on this link. Thanks!