God forbid I should ever have kids, because according to the latest glut of teen movies (Hunger Games, Maze Runner et al) I'd be condemning them to a future where they have to compete in some kind of experimental death fight just to survive. And you can bet any money my offspring won't be 'The One' who can save humanity; knowing my luck they'd probably join the dark side just because they get the better outfits.


Hopefully at least they'd be able to deliver the snark just as effectively as Peter (Miles Teller), who really is the standout in the pretty much bland sandwich filler that is the second in the Divergent series. The first installment was entertaining enough, but there was an overriding sense of wanting more. This time around some key questions are answered, but yet no one can give a definite answer as to why no two people can pronounce "erudite" the same way. Is it "arr-oo-dite", "eh-ru-dite"?

We catch up with the moist-eyed Tris (Shailene Woodley) after she's fallen through the cracks of the city's five-faction system, which the first film went at great lengths to explain; I imagine a similar system was used to give the Spice Girls their nicknames. 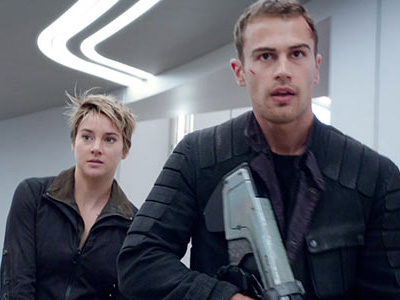 
As her chosen faction Dauntless (the sporty ones) are now the secret police for the Erudite (the posh clever ones) who orchestrated the massacre of her birth faction Abnegation (still have no idea what that actually means) she doesn't have many options left but to seek refuge with the peaceful-but-dumb Amity crew. Reporting again for handsome duty is teacher turned lover Four (Theo James), accompanied by wet sap of a brother Caleb (Ansel Elgort) and the bitchy Peter (Miles Teller).

On their case is Jeanine (Kate Winslet at her icy best), who gets to stomp around her glass office wearing the Killer Bitch Collection from Next – all royal blue pencil skirts and sky scraper heels; the Erudite are seemingly made up of Apprentice candidates. In her possession is the mystical MacGuffin of a magic box found at Tris's parents' home that will ultimately reveal all, but can only be opened by the one (or The One, rather) who can pass a series of psychotropic tests and prove to be 100% bona fide Divergent, i.e. Tris.

Unlike the first film, there aren't any training montages to help break up the pace, so instead it's largely Tris (sporting a fetching new pixie crop) and Four running away from leather-clad Dauntless foot soldiers with worse aim than Imperial Stormtroopers. Bounding through a decrepit Chicago, we briefly meet the Factionless, a group of Hollyoaks extras lead by an enigmatic Naomi Watts, gunning for a revolution. Despite an impressive District 13-style set up, little time is given to this motley crew before our leads end up at the monochrome faction of Candor. 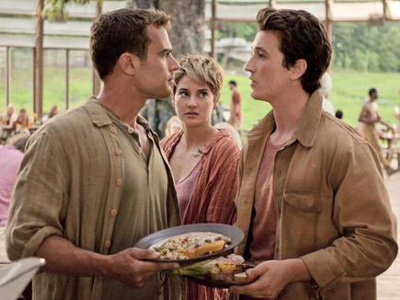 
Here they have special courtrooms where they enjoy mash ups of Judge Rinder and the Jeremy Kyle lie detectors tests, when Tris and Four are put on trial for their "crimes" and Tris must admit to her part in her parents' and friends' deaths. And learn some deep truth about herself, blah blah blah. As interesting as it is to see the other parts of this compartmentalised world author Veronica Roth has created, by and large they're two-dimensional and reduced to the basic concept of their class. Candor do not lie, so are always at great pains to remind you of this to the point of speaking sub-text aloud, "Yes, we do always tell the truth", and constantly thanking people for their honesty and candor – OK guys, we get it. As with Divergent, the dialogue in Insurgent is as creaky as a stricken oil-tanker, giving little chance for any of the ridiculously good-looking cast to prove they're more than just pretty faces.

Miles Teller at least gets to have a few juicy lines as the sarcastic turncoat Peter, but the rest of the film takes itself so seriously that his scenes tend to stand out for the wrong reasons.

Visually, Insurgent looks fantastic and the Matrix-style tests look particularly glossy. Director Robert Schwentke obviously loves the odd fake-out and blurring the lines between reality and simulation, but you can't quite shake the sense that what he's really trying to do is provide a lesson on the impact of violence and what it means to do the right thing. Scenes which should be shocking and carry a deeper sense of meaning are muted, something which The Maze Runner wasn't too afraid to handle.

Truth be told, I can't actually remember too much about the second book so can't really say whether it's a truthful adaptation or not, but overall it's an entertaining, if largely superficial ride. I said of Divergent last year that it was worth sticking around for the eventual pay-off and that still rings true, but the next installments will have to deliver a pretty heavy payload because Insurgent is hardly likely to start an uprising.

More:  Insurgent  Divergent  The Divergent Saga  Shailene Woodley  Miles Teller  Theo James  Kate Winslet
Follow us on Twitter @The_Shiznit for more fun features, film reviews and occasional commentary on what the best type of crisps are.
We are using Patreon to cover our hosting fees. So please consider chucking a few digital pennies our way by clicking on this link. Thanks!