Now look. You might have seen some pictures of Tom Hardy and a puppy. And yes, it's all very cute and everything, but I'd like it if we could just get past that and focus on what is after all a very atmospheric crime thriller that makes good use of AWWWW LOOK AT ITS WIDDLE FACE


Clearly this is a futile endeavour. And yet the dog's important, for as you move through The Drop you begin to realise that Rocco the puppy is telling you something about Hardy's character, Bob. Maybe we're not seeing him learn responsibility for the first time, but something else.

Tom Hardy, of course, is everywhere now and I couldn't be more pleased about it. With less star power, he's a quieter presence than Cumberbatch but by far the most interesting British actor around, capable of total character immersion. He sinks deep into accent and deportment till he's invisible. Here he's a guy who works in a bar: less of a total transformation than his Bane, perhaps, but you'd be surprised. It's a performance that reminds you of Stallone in the first Rocky, full of odd, laconic delivery, and malapropisms that look like undereducation (he initially wants to name the dog "Mike") but might just be designed to encourage underestimation. 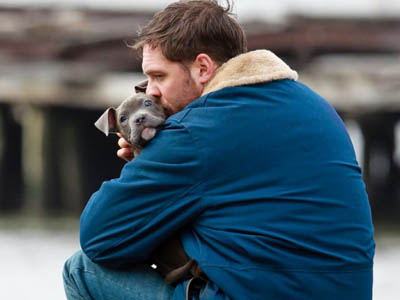 I know, I know, just try to focus.


This bar, then. Run by James Gandolfini's Cousin Marv but owned by the Chechen Mob, it rotates as a drop location for the city's gambling take. When it's robbed by a couple of guys in Purge masks, Bob and Marv have to come up with the money or an eerily calm Chechen hood will do them a mischief. Bob finds a puppy in Noomi Rapace's bin and takes it in, getting to know her better in the process, until her violent ex-boyfriend Matthias Schoenaerts shows up and throws a spanner in the dog.

Given that this is written by Dennis Lehane, whose writing credits include books that I've actually read right to the end (the ones that became films and therefore matter are Gone, Baby, Gone, Shutter Island and Mystic River), it's surprising that the script is the only thing that lets it down. Lehane's cornered the market in salt-of-the-earth, blue-collar-crime stories, finding depth and dignity among the barstools, neon shamrocks and backroom card games. Here there's a well-developed theme of the community being invaded - by Chechens, by developers tearing down the church to make "condos with stained glass windows" - as if somehow the local crime was more earthy, more noble, before. But there are bits that run by numbers. 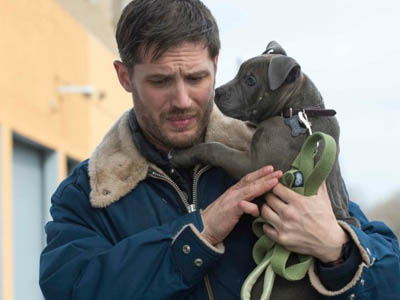 
Lehane's suspicious detective, Torres, comes sniffing around the bar after the robbery but his veneer of friendly jousting with Bob is ripped directly from Sean Devine's in Mystic River. The pace lags a bit in the middle and Marv's plans aren't too clearly laid out, making his motivations a bit foggy, aside from looming nursing home fees for a father we never see. Rapace's sunny moments while walking the dog with Hardy are well played but her character's a stock one: a woman defined by her reaction to an abusive relationship, whom I don't think talks to another woman once.

You can't fault much else of it. Gandolfini's Marv, formerly feared and respected, he tells us, has aged into a frustrated, impotent figure, shunted into irrelevance by younger, more volatile outsiders. He plays it just as you'd expect: unshowily and with a hangdog humour. As he ploughs deeper and deeper into trouble there's a nice sense that he always knew this was coming; that the neighbourhood would always undo him. But Hardy owns it: alongside his own Locke it's one of the better performances of the year. The dog's pretty good too.

More:  The Drop  Michael R Roskam  Tom Hardy  Noomi Rapace  James Gandolfini  Matthias Schoenaerts  John Ortiz
Follow us on Twitter @The_Shiznit for more fun features, film reviews and occasional commentary on what the best type of crisps are.
We are using Patreon to cover our hosting fees. So please consider chucking a few digital pennies our way by clicking on this link. Thanks!