Waaaaay back in 2012, when everyone was losing their shit over why Tom Cruise was playing Jack Reacher despite being comically ill-suited to the role, I had a few alternative suggestions. The Rock. Daniel Craig. Idris Elba. But it never occurred to me: Denzel Washington. Of course. Denzel bloody Washington. The bloke can turn his hand to anything. Luckily, Hollywood is way smarter than I am, and has set straight this misstep in the form of The Equalizer, with two key differences. One, an increased level of violence and a higher certificate to match. And two, unlike Jack Reacher, it's really very good.


Good enough that you're relieved Columbia waited till the leaves were beginning to turn and all the summer superhero fare was out of the way before releasing it, lest it be swallowed up and ignored. Reliably box-office as he is, Denzel's done a few recently that didn't make much of a dent: 2 Guns, Safe House, The Book Of Eli. He's not quite the marquee star he was, but here's the next phase, in which he uses his age to his advantage to spring the surprise of being badass. Just shy of his 60th birthday and kicking off an action franchise without an Expendable in sight. Good for him.

What's remarkable is how Washington and director Antoine Fuqua achieve the dual aims of making Robert McCall a slightly paunchy, bookish quinquagenarian who works at the Home Depot, but also a convincingly unrelenting army of one. There is no great switch in performance style that achieves this; he just inhabits both at once. 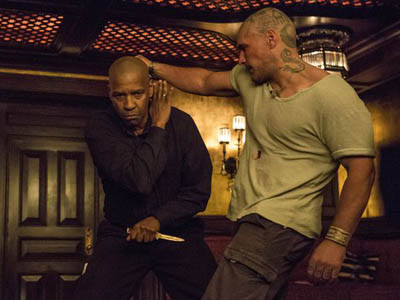 
The Equalizer takes a while to get going, but there's a point to that. McCall is out of the game (the game being a non-specific past in CIA black ops or somesuch), living a quiet life and trying to keep it that way. All he wants is to wear his belt a little too high, read a book in a diner and see out his days. What he doesn't want is a bunch of Russian bastards getting all up in his grill. And yet, when they come along, beating up the teen prostitute, Teri (Chloe Grace Moretz), he's befriended in the diner, it's he who makes the choice to get involved.

This sense of frustration at injustice is key to the character, and it's where Jack Reacher mainly fell down. The lone killing machine is a character archetype by now, and needs to be driven by some motivation to risk stepping out of his self-imposed inaction. There is a sense of decency in McCall, achieved by dad clothing, his coaching a well-meaning schlub from work for his security guard try-out, his entirely desexualised relationship with Teri, and of course the fact that he's Denzel flipping Washington. You accept that he wants to help because he can't stand to see bad people getting away with it, and will wreak vengeance on those who truly deserve it.

Edward Woodward's McCall, in the TV show on which The Equalizer is based, made the same moral judgements: watch it now and see how they betray the politics of the eighties. Anyone involved with drugs was fair game. But it's interesting to note how the idea of vigilante justice in a more general, cleaning-up-the-streets way is now an appealing one again. It flew just fine in the Reagan era, with America's urban centre in decay, street crime rife and the private prison industry taking off as a result (or arguably a cause). Now, post-2008 crash, we're heading back there and audiences like to see a guy taking matters into his own hands again. Could you have made The Equalizer work in the boom-era late nineties? 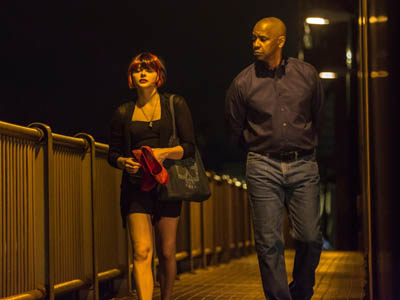 And yet when I chivalrously walk a teen prostitute home, all of a sudden it's some sort of "police matter".


Well, Denzel probably could've. Never underestimate the appeal of just enough violence. I've no great desire to see blood shooting out of a guy's neck as he gurgles his last, but there's no denying how resisting the temptation to cut for a 12A makes McCall's character carry a more convincing sense of menace and threat. The first scene in which he slips back into the old McCall, although making use of the old "calculate quick study of assailants in slow motion then strike" routine, which is a bit laboured these days, contains enough blood that you're in no doubt: he's a bastard when he gets going.

After a tense final showdown with Russian baddie number one (played Shere Khan-like by Marton Csokas, in a role that must've been a lot less rich on the page), we're treated to about five endings too many, giving it a slightly tacked-on feel to establish a likely sequel, but no matter. Finally we've got a legitimate hero in Dockers and a polo shirt. You don't need a cape to save the day.

More:  The Equalizer  Antoine Fuqua  Denzel Washington  Marton Csokas  Chloe Grace Moretz  David Harbour  Haley Bennett  Bill Pullman  Melissa Leo  David Meunier
Follow us on Twitter @The_Shiznit for more fun features, film reviews and occasional commentary on what the best type of crisps are.
We are using Patreon to cover our hosting fees. So please consider chucking a few digital pennies our way by clicking on this link. Thanks!