At the end of 2014, it was decreed that every film released this year must by law have at least one Game Of Thrones actor in the cast. So far, Alfie Allen has continued his nice line as an annoying little shitbag in John Wick; that girl who was in Hollyoaks was also in Fast & Furious 7 and Kit Harington has sat through countless interviews blank-faced as journalists tell him he knows nothing about Spooks. Later this year, we can expect to see our favourite gentle giant star as the romantic lead opposite Katherine Heigl in 'Hodor Right Moves', but at the moment it's the turn of Lady Arya Stark herself, Maisie Williams, propping up this mysterious psychological drama about girls passing out in the 1960s. If her sister was in it, I could have maybe said it was "Sansational", but The Falling ultimately falls wide of the mark.


On paper, there's a lot to like: director Carol Morley comes to this fresh from the powerful Dreams of a Life, there's a dreamy Tracey Thorn soundtrack, it has swooning teenage girls, burgeoning sexuality and hints of black magic. But despite some strong performances from Williams and Maxine Peake as her hairsprayed-to-the-hilt stay-at-home mother (literally; she has agoraphobia), the end result is a mish-mash of promising ideas lost in naff filmmaking. 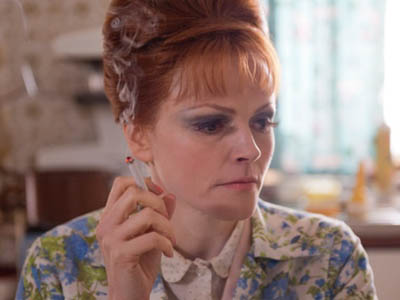 
When I was a pretentious media student way back when, I learned that there was no plot hole or idea cul-de-sac that couldn't be smoothed over with a quick cutaway before moving quickly on. Morley employs so many tracking shots of puddles and leaves rustling gently in the trees between scenes, I thought at any moment some Korean karaoke was going to kick in.

In a girls' school in 1969, the spiky Lydia (Williams) is best friends with 16-year-old Abbie (Florence Pugh), a lithe Lolita who's already made the first foray into the world of adulthood, slipping her finger into Lydia's mouth and telling her, "It takes you somewhere else, doesn't it?" A teen pregnancy and a quick bunk-up with Lydia's creepy older brother Kenneth (Joe Cole) fractures their relationship when it becomes clear Abbie's ready to leave Lydia behind.

And then the girls at school start passing out, for apparently no reason. Throw into this Lydia's difficult relationship with her mother, who is seemingly so disgusted with her daughter she can't even look at her, and the possibility of supernatural goings-on, and the end result is an unstructured, amateurish mess.

Whilst it's acceptable not to offer satisfying, pat answers and leave the audience to make up their own minds, Morley is so keen to weave in extra threads that none is given any particular importance and the film ends up not knowing what it is, trying to be a kitchen-sink-cum-melodramatic-teen-spooky-drama. 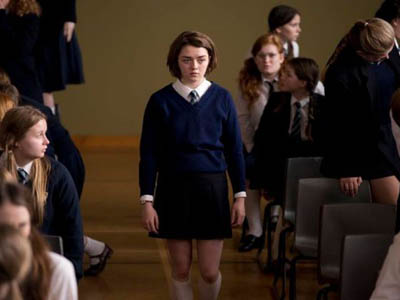 Arya is called to the stage in assembly to explain why she murdered a load of men with a sword.


After a mass fainting during a school lesson, Lydia and her group of friends pull closer together and start holding rituals, holding hands in a circle under an oak tree, looking to the sky; a teenage boy catcalls as he cycles past, but falls off his bike as Lydia whips her head to look at him. The insinuation is that somehow she has witchy powers to make this happen, but as soon as this is mooted, there's a switch to an odd progression in the relationship between two of the female teachers as they lament how they've been confined by a patriarchal society. Lydia's mum starts to chain-smoke herself into oblivion and then there's another cutaway to some puddles and people staring out of rain-streaked windows.

The relationships between Lydia and those around her are really what drive the film, and Morley is certainly deft at creating unsettling and uncomfortable moods. However, this falls by the wayside when she wants to concentrate on the next possible explanation for the faintings, before that is forgotten about and the next random thing happens. By the time the 'epidemic' reaches critical point, Lydia makes the bold move of seducing Abbie's last lover, which is particularly unsettling as it's her own brother and The Falling suddenly becomes all the more complicated and messy. At the screening reviewers were asked not to spoil a key plot point that happens in the first third (which I haven't), but that event has much of a lesser impact when you realise incest is on the cards, and suddenly the film has a lot more in common with Game Of Thrones.

Williams and newcomer Pugh are definitely ones to watch, and I can't say I'd ever want to be alone in a room with Cole any time soon, but with every intriguing avenue blocked by writing that feels first-draft, or another shot of a tree, an intriguing premise is frustratingly wasted. At best it could have been a fairly decent one-hour drama, but only if someone managed to chop out all the boring cutaways and meaningless montages.

More:  The Falling  Carol Morley  Maisie Williams  Florence Pugh  Greta Scacchi  Monica Dolan  Maxine Peake  Mathew Baynton  Joe Cole
Follow us on Twitter @The_Shiznit for more fun features, film reviews and occasional commentary on what the best type of crisps are.
We are using Patreon to cover our hosting fees. So please consider chucking a few digital pennies our way by clicking on this link. Thanks!