You are the Fifth Estate, it says on the poster. That's right, you. Not me: I'm busy with other stuff, but I'll cover for you when you're on holiday if you like. What this means is that, in the digital age (*spits*), beyond the realm of the news media, all of us have a voice and so all of us are responsible for holding institutions and elected officials to account. Shit, and all we've been using it for is highlighting the fact that Russell Crowe has a wang on his hat.


Here's the central conflict driving The Fifth Estate, a movie about WikiLeaks starring Benedict Cumberbatch as Julian Assange. Are we all the Fifth Estate, or is it just him? Has WikiLeaks been a democratising crusader for the truth, or a soapbox for one funny-looking Australian chap and his monumental ego? While it's far from a character assassination, Bill Condon's film does take a definite stance - that absolute truth is a noble pursuit but a dangerous tool, particularly in volatile hands - and Assange doesn't come off all that well.

Cumberbatch does, however, and indeed it's hard to remember the last time he came off badly. Too many acclaimed performances in biopics are just good impersonations; here the actor seems to inhabit the man deeply. Yes, the voice is bang on, and the whole louche, crumpled Assangeness of his manner is there, meticulously researched and mimicked, but there's more. He emphasises brilliantly, with shades of his Sherlock, Assange's impatience, the frustration at the rest of the world not being up to his speed, and when he reneges on his agreement to redact the names of sources before publication it seems more like frustration at how much it'd slow him down than it does recourse to the 'no editing' ideology. 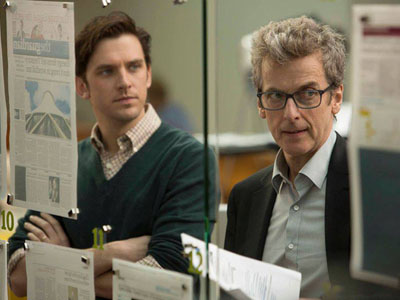 The tantalising prospect of Malcolm Tucker in Downton Abbey. Imagine.


It seems, too, like a refusal to accept, or reveal, that WikiLeaks is a small organisation despite its reach. There are certain things a small organisation can't do, like accurately redact 91,000 documents in a matter of days. This idea of the size of the project being bigger than Assange is played upon a lot throughout The Fifth Estate: our eyes and ears Daniel Domscheit-Berg (Daniel Brühl), former WikiLeaks second-in-command, pictures at first a Tron-like room, vast and full of networked PCs, an army of volunteers hacking away. The later reveal that they are all Assange shows us this is one man's work: an empty room, full of empty promises. Hang on, that would make it a full room. Shit.

We follow Daniel's relationship with WikiLeaks from his first meeting with Assange up until the inevitable fall-out, and in narrative terms it's simple and satisfying enough. Too many comparisons to The Social Network have already been made for me to pretend this one's original, but it is very stark how the lines have been drawn in exactly the same way. Daniel's our Eduardo Saverin conscience, and while we could do without the sledgehammer device of his girlfriend, frustrated because he's on his laptop the whole time, constantly warning him that Assange will hang him out to dry, it's him we want to come out the other side. 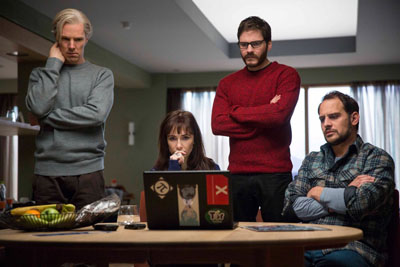 The drama of refreshing the Ticketmaster page for confirmation that your tickets to Blue Man Group are confirmed, here played out to devastating effect.


Condon moves us swiftly through the brief burning of Assange's flame, doing a good job of making the mundane seem interesting (the problem arises that WikiLeaks needs new servers; their crusade to find appropriate ones plays out like a Bourne film without the punching) and the slew of information typed out on laptop screens for our benefit doesn't grate: a tech movie has to feature this just as a romcom needs a wacky best friend, it seems to me.

I'm not sure we need two films about WikiLeaks within months of each other, though you can't blame either for the other's existence. Certainly Alex Gibney's documentary We Steal Secrets was a more balanced account, and had more narrative urgency about it. Still, while The Fifth Estate might have benefited from waiting a few years till the context of the Manning leaks becomes fully clear, its performances are enough to recommend it: Brühl's for its strength as a guide through the story, and the lead for its sheer barnstorming Cumberbatchitude. But is it saying any more than a good documentary could - and did? I don't know: you're the Fifth Estate. You figure it out.