After hitting dizzying new heights with this summer's mind-bending, mind-bonding masterpiece Inside Out, Pixar are now suffering the subsequent downer: not only is The Good Dinosaur one of the bleakest and most relentlessly grim movies they've ever made, it's possibly the lowest high concept movie they've conceived to date. Although there's no denying The Good Dinosaur is the most incredible-looking movie of the year, its beauty hides the scars of a screenplay that has been diced and spliced like dino DNA at Jurassic Park.


Pixar movies are usually grounded in What Ifs; fantastical daydreams that result in childlike concepts universally understood. What if toys had secret lives behind our backs? What if monsters were scared of us? What if cars could talk and had giant tongues for some reason? The Good Dinosaur's What If sounds like a doozy in theory - What if the asteroid that killed the dinosaurs had missed? - but in practice it's not explored as fully as you might hope: it's little more than an excuse to bring monster and man together for a tried-and-tested mismatched buddy movie. The film was famously delayed a year for retooling, but pitch that same question to the Pixar brain trust working from a blank page and I'd wager you'd get five concepts that feel more adventurous than what we got with The Good Dinosaur; maybe the first Pixar movie where you feel the labour more than you feel the love. Pixar's usual output is purebred: this feels like a rescue dog.

Thankfully, though it might be a more conventional story than you'd expect from Pixar, it is a simple tale well told, inhabiting the opposite end of the storytelling spectrum that Inside Out occupied. In fact, its simplicity plays in its favour: think of it as an end of year palette cleanser. We join young Apatosaurus Arlo as he's separated from his father during a storm, adhering to the 'at least one dead parent' terms of his Disney contract, embarking on a journey home where he encounters all manner of obstacles, critters and Important Life Lessons. Along the way, Arlo befriends Spot, a tiny feral child/puppy, and their touching relationship - unfolding via body language rather than words, like so many Pixar friendships - is the glue that holds The Good Dinosaur together. When they're eventually separated, the emotional chasm that opens up between them feels vast and meaningful. 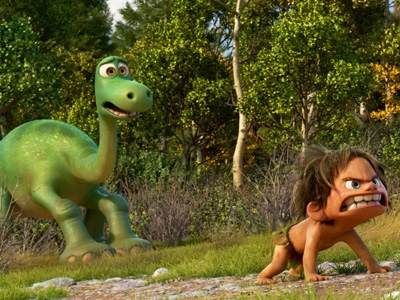 "This feral child. I shall call him Colin. Colin feral."


Maybe it's just because Pixar have released two tear-jerkers in a year (also because I have the emotional stability of a newborn baby), but it's hard not to feel worked over a little when it comes to emotional manipulation. There are moments of sadness here that rival even Inside Out for ribcage-trembling, lip-wobbling sobs, but one final moment of heartbreak, at the very end of the movie, doesn't feel earned and ends the movie on a somber note. The credits roll over beautiful still images of nature and once you wipe the snot from your nose, you can't help but feel like a bit of extra levity wouldn't have gone amiss.

There are laughs, including a particularly adult hallucination scene, but The Good Dinosaur is resolutely episodic in nature. There's an amusing interlude with Peter Sohn's Pet Collector dinosaur plus his furry chums ("This is Dreamcrusher, he protects me from having unrealistic goals") who just ambles off never to be seen again; we move from encounters with pterodactyls onto T.rexes and raptors with little narrative progression. Early on, Arlo's Poppa tells him "If you can find the river you can find your way home" and the movie's screenplay clings close to the riverbed at all times: this is linear storytelling that rarely ventures off the beaten track.

That said, you can't help but fall at least partly in love with a movie that shows this much reverence for the natural world: The Good Dinosaur has the scope and the scale of an Attenborough documentary. It contains moments of breathtaking beauty: a field of fireflies illuminated with the sweep of a tail; Arlo and Spot gleefully galloping through a flock of birds on the beach; the sheer urgent menace of pterodactyl fins jutting through clouds like sharks in the sky. For once, that hokey old claim that "Nature is a character in our movie" rings true; the world of The Good Dinosaur is unforgiving and unmerciful and awesome in the truest sense of the word. You're left with a movie that is equal parts exhilarating and exhausting; a picture that's rapt with wonder but a story that doesn't inspire nearly as often as it should.

More:  The Good Dinosaur  Pixar  Peter Sohn  Raymond Ochoa  Jeffrey Wright  Sam Elliot  Anna Paquin
Follow us on Twitter @The_Shiznit for more fun features, film reviews and occasional commentary on what the best type of crisps are.
We are using Patreon to cover our hosting fees. So please consider chucking a few digital pennies our way by clicking on this link. Thanks!