If you could attend any party hosted by a Hollywood director, you'd want it to be Baz Luhrmann's, wouldn't you? I reckon he just beats out J.J. Abrams' cosplay event in the fun stakes, and you'd certainly want to avoid the intimate get-together round Lars Von Trier's house (*shudder*). Luhrmann clearly knows how to pull out all the stops - as evidenced in the ridiculously extravagant Gatsby gatherings here. The problem with this film, however, is that once we've seen one magnificently ostentatious evening, everything after fails to live up to the spectacle. Luhrmann basically invites us to the world's greatest party, but it's one that slowly sours over the course of the following two hours. At least James Cameron's uncompromising pool party would be consistent.


This isn't to say that the film gets steadily worse though. More that the tone shifts dramatically from hedonistic splendour to weighty melodrama after the first act. And while this is a worthwhile course for the overall story, Luhrmann uses up all his best tricks early on, with stunning visuals and wonderfully choreographed flights of fancy giving way to flat, solid drama. The result is a film that almost feels split in two, the first part being a sumptuous, dizzying representation of extreme opulence that you could watch endlessly, and the second part telling a story that you just won't feel the need to revisit again in a hurry. 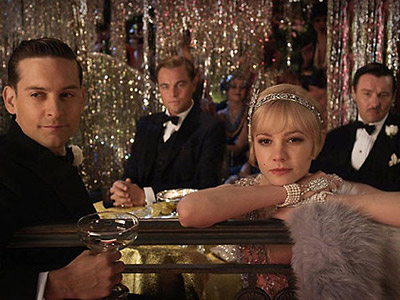 This is your audience reaction right here.


In adapting F. Scott Fitzgerald's classic novel, Luhrmann had obviously spied an opportunity to dazzle with his usual penchant for theatrical razzamatazz. But there is also a strict devotion to the author's writing - perhaps in fear of upsetting fans - that is at odds with this approach. The reason that The Great Gatsby is such a difficult book to adapt is because the enjoyment is all in Fitzgerald's writing - as presented in first-person narration by Nick Carraway (played here by Toby Maguire).

Rather than developing a completely new interpretation that complements the tone of the story, all too often Luhrmann shows a slavish attempt to do the book justice by literally having the words appear on screen. Sorry Baz, but no amount of Jay-Z soundtracking and fancy fonts can disguise the fact that the best way you could think of to represent Fitzgerald's descriptions is to just have the prose float up before our eyes.

What's more galling, however, is that, in many other respects, Luhrmann takes huge liberties with the novel. In order to preserve the first-person narrative, for example, the movie comes complete with an entirely made-up framing device in which Maguire's broken, alcoholic, post-Gatsby Carraway recounts the events to a psychiatrist. He is then encouraged to put pen to paper and essentially become Fitzgerald, presumably so that old Baz can pay tribute to the authorship as well as merely tell the story. 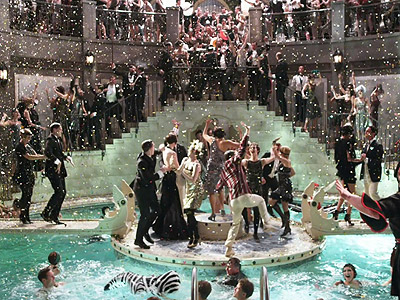 Whilst also making every other scene look like a page from Where's Wally.


Granted, a lot of the changes made along the way are only likely to rankle fervent Gatsby fans (y'know, all of them), but the repercussions reflect badly on the movie. Not least in the clumsy handling of character motivations. Here we have a complex story about idealism, pride, nostalgia, excess and, most importantly, rich socialites doing the wild thang with people that aren't their married partners. For all the panache and flamboyance of the era - which Luhrmann has down to a tee - the intricacies of this unfolding drama needs a deft, delicate touch. Instead, we get a heavyweight tale that will leave you not really caring for any of the characters and wondering why any of them want to be with each other in the first place.

But it's not all a lost cause. Just as with Luhrmann's excellent eye for spectacle, much of the acting on display rises to the task at hand. In the latest of a long line of superb performances, Leo stands out far and above the rest here. His boyish, aloof Gatsby coasts on charm and charisma for much of the first act, before cracks of desperation start to appear and ultimately give way to anxiety, jealousy and, in one impactful scene, fury.

Plaudits go to Joel Edgerton too who thoroughly convinces as Tom, the brutish husband of Daisy, the focus of Gatsby's affection. Meanwhile, however, Maguire fails to shake off the manchild aura that so befitted his Peter Parker but has seemed ill-placed ever since, and Carey Mulligan's Daisy is bland when the role requires her to be sparkling. 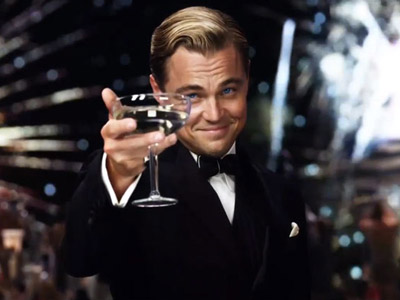 Here, have a drink, you gorgeous, delightful... actually, I might see who else is at this party.


Overall the film gives much to admire. While the highly anticipated soundtrack does little to enhance individual scenes and the 3D has almost no effect, Luhrmann still manages to continually surprise with wonderful directing turns. Floating camera angles and shifting landscapes help to make up for a script that ultimately feels mishandled. All in all, what could have been a great adaptation of the great American novel The Great Gatsby is, instead, merely a bit good.

More:  The Great Gatsby  Baz Luhrmann  Leonardo DiCaprio  Carey Mulligan  Tobey Maguire
Follow us on Twitter @The_Shiznit for more fun features, film reviews and occasional commentary on what the best type of crisps are.
We are using Patreon to cover our hosting fees. So please consider chucking a few digital pennies our way by clicking on this link. Thanks!