"It happened again..." groans Bradley Cooper down the phone in The Hangover: Part II's opening scene. "Worse than you can even imagine." Woah. Pretty bold to open your sequel with a line that could so easily be interpreted as prophetic there, Mr Cooper. While Hangover 2: The Drunkening isn't quite as bad as you can imagine, it is precisely what you expect: same shit, different continent.


A sequel to The Hangover was always inevitable, but you'd hope that Todd Phillips would trust his audience enough to try and do something different with the follow-up. There's obviously a requirement to have a certain degree of familiarity – a nod and an in-joke here, a character cameo there – but The Hangover: Part II shows the writers have absolutely no faith in their characters or their own ability to take them somewhere new. 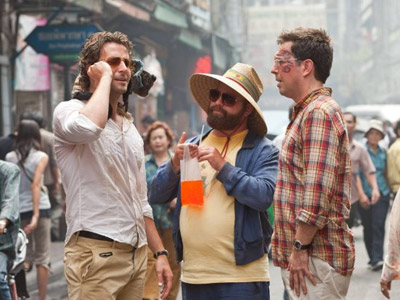 There's the opening bombshell, the rewind, the awkward scene with Alan; the fast-forward, the groggy morning after, the hunt for the missing member; the red herring, the kidnapping, the bait and switch. Ed Helms even has a mini-musical interlude – in the original, it felt like a sweet little aside, but here it's yet another box ticked marked 'THIS WORKED, DO THIS AGAIN'. By the time Mike Tyson turns up for his dreadful cameo, all of the movie's goodwill is burned through like paraffin. 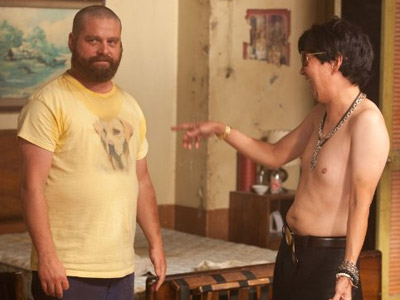 Although that IS a brilliant T-shirt.


The Hangover: Part II abides by the unspoken rule of the sequel: everything has to be bigger, crazier and louder than before. This works to a point (hearing the extremely graphic description of an encounter with a ladyboy is cringeworthy yet hilarious) and Bangkok is the perfect location for such a set-up, but the incessant need to one-up the original in terms of shock value grates quite quickly. A group of pilled-up American bachelors being assholes in Vegas works just fine, but taking the same obnoxious jerks and dropping them slap-bang in the middle of another culture renders queasy results.

Everything is just so unnecessarily aggressive. Bradley Cooper's Phil graduates from a chest-thumping alpha male in the original to a borderline sociopath; Zach Galfianakis' wildcard Alan is still "literally too stupid to insult" but goes from being a well-meaning idiot to a unforgivably idiotic buffoon. Only Ed Helms' Stu has any sort of meaningful character arc, and it's not a particularly well-sketched one – nothing in The Hangover: Part II feels like it's progressed past the first draft.

It's clear also that Todd Phillips has a real disdain for women – or perhaps it's just total and utter indifference on his part. Jamie Chung as Stu's wife has nothing to do except wait out the storm with a concerned look on her face and hug her fiancée upon his return, despite the fact he's sporting a facial tattoo on their wedding day. No shit-fits? No screaming? No sign of independence at all? Maybe that's just Todd Phillips' comment on the passive nature of all Asian chicks, right? Something like that. 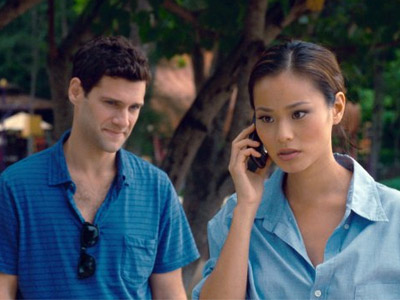 
There are a few good lines in among all the winks and nudges ("I wish monkeys could Skype"), but they're only heard when the background din is at a minimum – frankly a little more downtime is needed. If The Hangover: Part II makes lots of money – and let's face it, it will – then The Hangover: Part III has to be considered a terrifyingly real possibility, but this franchise has gone as far as it can for now. Maybe an early night wouldn't be such a bad thing for once.

More:  The Hangover  The Hangover Part II  Bradley Cooper  Todd Phillips  Ed Helms  Zach Galfianakis  Jamie Chung
Follow us on Twitter @The_Shiznit for more fun features, film reviews and occasional commentary on what the best type of crisps are.
We are using Patreon to cover our hosting fees. So please consider chucking a few digital pennies our way by clicking on this link. Thanks!