The Hobbit: An Unexpected Journey

So we're back to the familiar LARPing territory of Middle Earth then. With wizards and elves and dwarves and huge CGI monsters and big sweeping shots of the New Zealand countryside. The Hobbit may be a different story to The Lord Of The Rings - an independent story that came first, with its own characters and dangers and adventures - but there is really nothing all that unexpected about this journey. Oh apart from the singing. That’s a bit of a shock.


The biggest problem stems from the fact that The Hobbit is supposed to be Tolkien's introduction to this fantasyland, introducing us to the many myths and creations populating his world. But we’ve already seen it all. And while Peter Jackson does a remarkable job of redirecting the story for an audience already familiar with Middle Earth's inhabitants, there isn't much else to keep us gripped.

In this way, it is a far less developed and impressive tale than The Lord Of The Rings, and stakes don't seem anywhere near as high. Once you've seen hobbits and kings and elves and dwarves band together to defeat the all-encompassing evil of Sauron - all while the very soul of young master Frodo gets slowly corrupted - it's hard not to feel that this story of a hobbit and some singing dwarves going off to thwart a dragon is a bit of a step back. It's like watching The Philosopher's Stone after already seeing the Deathly Hallows, or like watching The Phantom Menace after already seeing, well, every other film ever. 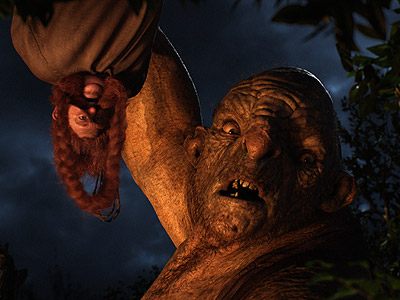 But then, maybe it is unfair to compare The Hobbit to the accomplishments of The Lord Of The Rings. After all, every film should really be judged on its own merits. The problem, however, is that Jackson seems desperate to tie this in with his previous trilogy. All of the added scenes designed to make this film part of his Tolkien ‘whole’ are by far the most unnecessary; an overlong introduction of Ian Holm's Bilbo talking to Elijah Wood's Frodo and a discussion with Elrond and Galdriel in Rivendell are the worst offenders, padding out what is obviously a stretched-thin plot.

And yet, despite an overly twee beginning – serving as a reminder for all the most cringeworthy moments of The Fellowship Of The Ring – and the fact that you have to sit through two dwarf songs before anything of note really happens, the film eventually gets going. And just seeing a new adventure start again in the familiar world of Middle Earth is like receiving a warm, cinematic embrace – every frame looks stunning and every screen pixel helps to convince that you are back in this magical land of sorcery and orcs and hairy feet.

Martin Freeman makes for a perfect out-of-depth hobbit, suitably indignant but with real heart when it matters. His endearing Bilbo Baggins is a much-needed focus for the story considering that the rest of his little companions, bar Richard Armitage’s would-be Dwarf King Thorin and – of course – Gandalf, are pretty much all interchangeable. And who cares if a goblin looks likely to kill Bofur, when you can’t tell him apart from Bifur, Bombur, Dwalin, Cuthbert, Dibble OR Grub? 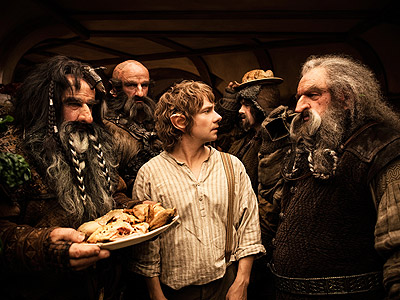 I don't even recognise the one on the right.

As the film progresses, it gets more immersive thanks to the same kind of huge epic-scale action that was LOTR’s hallmark. With giant rock monsters, swollen goblin kings and vicious one-armed orcs, every fight, scrape and battle is a call-back to Jackson’s glorious trilogy. And none moreso than the highlight of the film: Bilbo’s riddle showdown with Gollum. With the ex-hobbit’s blubbering schizophrenia turned up to extreme levels of utter bonkers-ness, the brain-off between the two ring-bearers makes for a truly dark and terrifying scene.

It’s just a shame that, whereas the perils faced along Frodo’s trip to Mordor all seemed to derive organically from the journey, this film’s set-pieces seem more like asides that distract from the story. Between the trolls arguing over how best to cook a dwarf and Radagast The Brown spending five minutes caring for a dying hedgehog, you get the impression that every syllable in the source material is being eked out for maximum coverage.

Finally, a word on the much-discussed 48fps. The higher frame rate does make for a super-sharp clarity of picture that certainly feels like the future of cinema, and yet it is not always to this film’s benefit. The first twenty minutes seem eye-gaugingly awful as it takes a while to adjust to the new frame rate – every movement and shake of the camera is exaggerated and every costume and prop is seen in such detail that the film looks like an 80s TV production. And yet, when eyes have settled, the CGI looks even more remarkable and the 3D even more spectacular. But is it necessary? I’d argue that the new technology is a huge success but shouldn’t have been introduced with this film – a movie that is trying to look stylistically the same as the previous trilogy, and one that is supposed to have an old-worldly, romantic charm to it.

More:  The Hobbit An Unexpected Journey  The Hobbit  Peter Jackson  Martin Freeman  Ian McKellen  Richard Armitage  The Lord Of The Rings
Follow us on Twitter @The_Shiznit for more fun features, film reviews and occasional commentary on what the best type of crisps are.
We are using Patreon to cover our hosting fees. So please consider chucking a few digital pennies our way by clicking on this link. Thanks!