The Hobbit: The Desolation Of Smaug

First things first: there are no songs, no washing up scenes and no fucking eagles in The Hobbit: The Desolation Of Smaug, which immediately makes it a better film than its predecessor. The eyeball-molesting increased frame rate of An Unexpected Journey has also been, if not dropped, then less loudly trumpeted for this film, which is another blessed relief. You'd almost be fooled into thinking that Peter Jackson has been listening to his critics, were it not for the fact that Desolation is still an obscenely long, slightly dull, inferior version of a Lord Of The Rings film.


The Desolation Of Smaug (Jesus, that title) kicks off with a prologue which takes place twelve months before the events of An Unexpected Journey, and it's not a very interesting one. It shows us Gandalf's first encounter with grumpy, homeless dwarf king Thorin in some wretched hive of scum and villainy, and reveals that somebody's put a price on Thorin's head so large that every bounty hunter in Middle-earth will be looking for him. He's lucky Greedo Gandalf found him first. The point seems to be to add a frisson of danger to Thorin's character; to make him a bit less of a party pooper and a little more Aragorny, but it doesn't really work. The prologue feels tacked on, and the situation is barely mentioned again. 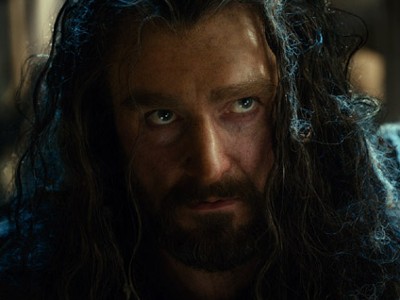 Just to clarify: Thorin is the short, hairy one...


That scene is symptomatic of much of the film's storytelling issues: although Jackson and his co-writers have mastered the flow of their tale more successfully than in its episodic prequel, there are still half a dozen scenes which serve little to no purpose other than to extend an already protracted story. Some of them - like the meeting with Beorn, the skin-changer - are destined to pay off in the next (and hopefully, although you never know, final) film, but in this episode all they do is further delay proceedings. Jackson's grand, nine-hour vision of The Hobbit may well be the benefactor, but each film has to work as a contained piece too, and in this, Desolation fails.

It also does itself no favours by repeating iconic elements of the Rings trilogy, only less successfully: when Bilbo and co are attacked by the spiders of Mirkwood, it's impossible not to be reminded of Return Of The King's Shelob. But where that scene was tense and eerie, this one is tonally all over the place - the spiders look terrifying, but comically mutter to each other like a bunch of your most awful work colleagues doing Gollum impressions. Likewise, new token female character Tauriel is a kick-ass, but less complex, version of Arwen, inserted apparently to prove Legolas isn't gay and to help explain why Aidan Turner's "traditionally" handsome dwarf Kili is the only one of his company not to look like a large, hairy wart. 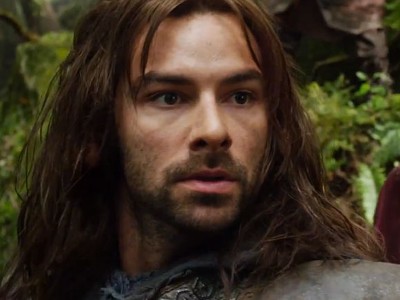 ...whereas Kili is the glossy-haired one with the pretty mouth.


Where Desolation starts to earn back its reputation is in two of the film's countless set pieces. The barrel escape from the dungeons of the Silvan Elves is tremendous; a triumph of choreography, wit and Spielbergian invention, providing endless crowd-pleasing ways for Legolas to skewer orcs and giving ginger dwarf Bombur the most joyous, thrilling moments of the trilogy so far. The second success is with its titular antagonist, Smaug The Magnificent. And he is. Magnificent I mean. Another incredible WETA creation, Smaug - voiced by Benedict Cumberbatch as if from inside the caverns of Hades itself - is ridiculously enjoyable, and Peter Jackson does an exceptional job of keeping the interaction between a gigantic dragon and a tiny Hobbit plausible. It lacks the subtlety of An Unexpected Journey's Riddles In The Dark scene but it's staggeringly-realised enough to keep you entertained for most of the final act, before you realise it's about three days long.

There's also the not-insignificant matter that Jackson's Middle-earth is as spectacularly rendered as ever. It's still a treat for the eyes (except in the dullness of a 3D screening) and ears, with impressively detailed production design - Lake-town, an even lower-rent Waterworld, is a fun mess of shacks and canals - and another barnstorming score from Howard Shore. There's just the distinct feeling that somewhere, somehow, the magic has gone; where the wait for Return Of The King seemed like some kind of punishment, it's hard to summon up the enthusiasm to want to go There And Back Again.

More:  The Hobbit  The Hobbit The Desolation Of Smaug  Peter Jackson  Martin Freeman  Ian McKellen  Richard Armitage  Orlando Bloom  Benedict Cumberbatch  Evangeline Lilly  Aidan Turner  Stephen Fry  James Nesbitt  Sylvester McCoy  Luke Evans
Follow us on Twitter @The_Shiznit for more fun features, film reviews and occasional commentary on what the best type of crisps are.
We are using Patreon to cover our hosting fees. So please consider chucking a few digital pennies our way by clicking on this link. Thanks!