So now we arrive at the second film of the latest mega-successful young-adult-novel-turned-movie-franchise and this is where things can get tricky. It's easy enough to come up with an initial concept - boy goes to wizard school, girl falls in love with vampire, etc - but following it up with the beginnings of an epic saga? Much harder to do. Thankfully though, this sequel manages to accomplish just that, successfully furthering the story and delving deeper into the politics and ethical quandaries laid out by its predecessor. All this despite being - for the most part - basically the same film.


It’s a strange situation that the franchise finds itself in. Unlike Harry Potter who could go off and see as many magical wizarding adventures as his little round glasses could handle, or Bella Swan who could explore the depths of her wanton necrophilia in a myriad of sordid ways, the sequel to The Hunger Games has still got to be based around… well, The Hunger Games. Otherwise the film becomes something of a misnomer. Like Trainspotting. Or Ghost Dog.

The problem is, we saw the main characters take part in The Hunger Games in the last film and they won, with the implication that they’ll never have to return. So how can the sequel still explore the same games if everyone we know has moved on from them? It’s a dilemma that was obviously faced by author Suzanne Collins when writing the book (although I can’t be sure – I haven’t read any of them on the basis that I fail the ‘young adult’ categorisation for at least two reasons) and luckily she came up with the idea of… just sending them back in again.

But this time it’s for an 'Ultimate Hunger Games: Winners Edition'. It’s like that time when Big Brother celebrated its anniversary by having a special series filled with previous contestants. Although, with this Hunger Games sequel – still set in a dystopian future - you’re less likely to despair at what humanity has become. 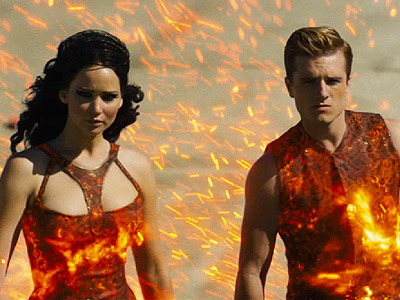 
So, once we get the initial context establishment out of the way – Katniss and her ill-suited suitor Peeta tour the districts and witness the sickening disparity between the rich and poor worlds, resolving them to the idea that 'something must be done' – it’s down to familiar business. Moustache-twirling villain Donald Sutherland announces his thinly veiled plan to kill Katniss with a Hunger Games Special and the movie starts hitting all of the same beats as the first film.

Literally all of the same beats. We see the initial struggle to come to terms with the announcement, the introduction of the other contestants, the training montage, all the players being interviewed by the orange-faced, white-toothed Stanley Tucci and even Katniss spinning around in another Kravitz-designed transforming dress. Not to mention that we see our heroine commit another act of defiance in the face of her potential sponsors – again, with pretty much no consequence. 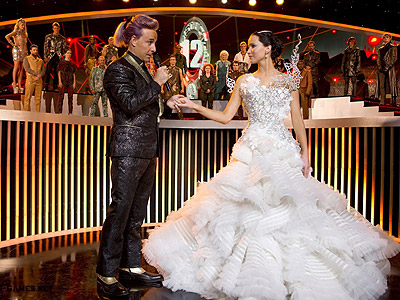 Katniss stars in an episode of Big Hungry Gipsy Weddings.


And then the games begin, and we are launched into a recognisable Battle Royale, followed by the same perilous hunting, trust issues and uneasy alliances as we have already seen. At about the midway point of this film, and for about the next hour, you’d be forgiven for thinking that you had accidentally walked into a special Director’s Cut Redux version of the first film.

Thankfully, there’s just enough happening subtext-wise here to still set it apart. With Katniss and Peeta now up against previous winners, the stakes do seem higher this time round, not to mention that it seems there’s even less chance of them both making it out alive. Also, the new gamesmaster – Philip Seymour Hoffman’s mental-monickered Plutarch Heavensbee – adds the extra suspicion that a mysterious, evil mastermind is now pulling the strings behind the scenes. Most of all though, the Games’ new terrain, all eventually revealed to be created as part of a clever design, makes room for new dangers and threats that results in the Hunger Games portion of the film being just as fun to watch as it was in the last movie.

There are surprises along the way too though. The love triangle between Katniss, Peeta and Liam Hemsworth’s Gale is explored and further complicated in ways more fitting to an awards-worthy drama, and the rumblings of a rebellion starting throughout the various districts, along with the brutal treatment of those that publicly support it, hints at a deeper, complex global power struggle just about to begin. Even shallow host Effie Trinket gets an unexpected emotional scene, pitched perfectly by actress Elizabeth Banks. 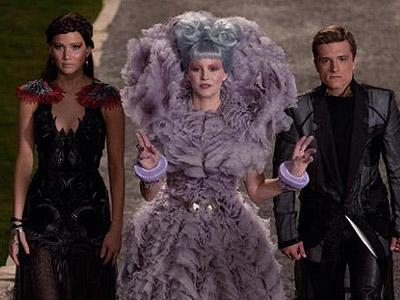 No one has ever tried harder for an Oscar than this film's costume designer right here.


Best of all – and the reason why there are four stars up at the top there instead of three – the final 15 minutes make for a tantalising ending to the film and a game-changing turnaround for the franchise.

For the most part, the film could well be mistaken for its predecessor. You could flick over to this on TV and spend a good while trying to determine which instalment in the franchise it is. And yet, this sequel actually does everything better than before. It has the action and drama of the first film, but is an even more mature effort, enhancing the world it occupies, enriching the story further and teasing just enough of what’s to come to leave you champing at the bit for the third film. If anything, and rarely for a sequel, this film almost renders its predecessor unnecessary. More importantly, it makes you believe that the best is still yet to come.

More:  The Hunger Games Catching Fire  The Hunger Games  Jennifer Lawrence  Josh Hutcherson  Liam Hemsworth
Follow us on Twitter @The_Shiznit for more fun features, film reviews and occasional commentary on what the best type of crisps are.
We are using Patreon to cover our hosting fees. So please consider chucking a few digital pennies our way by clicking on this link. Thanks!