SPOILER ALERT: I'm pretty sure the main guy dies at the end.


How do you go about making a miniseries about one of America's richest and most powerful families? Well, grab a bunch of well-known actors, chuck them and $30 million against a wall and see what sticks.

Could be a recipe for total gold dust in theory. Alternatively, it could end up being overwrought and melodramatic. Guess which one The Kennedys is. 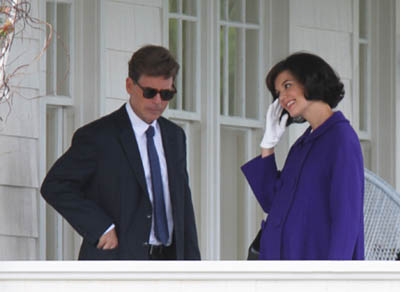 Greg Kinnear and Katie Holmes as Jack and Jackie Kennedy. Not pictured: the Mafia. (*gets bundled into a car by men in suits and is mysteriously never seen again*)

It should work so well, though. You can't help but be fascinated by the subject matter. Joseph P Kennedy made fat stacks in finance in the twenties, then by importing spirits after Prohibition ended in 1933. Later as Ambassador to the UK in 1940 he made statements that seemed to endorse Hitler, which kiboshed his chances of ever becoming President, and he set about creating a dynasty to rule America, and trying to make sure one of his sons would succeed where he couldn't. Cue much political wrangling, hushed-up affairs, ties to the Mob and mysterious deaths.

So the story's dynamite already, and you shouldn't need to do much to it other than get a good cast on board and shoot it simply.

Then again, you should probably make sure there's lots of stirring music behind every scene where something significant's happening. Otherwise how will people know, right?

OK, they're just having a normal conversat— oh wait, here comes the music, SHIT THIS IS REALLY IMPORTANT
By and large, the performances have a good deal of depth where it'd be easy to settle for impersonations. Barry Pepper as Bobby Kennedy stands out in particular: in the first two episodes he gets less screen time than the others but makes the most of it. His, eh, Kennedy accent is, eh, flawless - just stopping short of a Mayor Joe Quimby impression - and he plays the part of the unfavoured son to perfection.

Greg Kinnear also makes a good fist of JFK, whose main conflict is that he really wanted just to go to parties and get laid rather than become President (turns out becoming President actually makes it a lot easier to get laid - who knew?). He's saddled by some daft, clichéd scripting though. When he first hits the campaign trail he's nervous; nothing like the great orator he would later become. But it's only when he decides mid-speech to drop all the focus-grouped PR bullshit and - hey! - just speak from the heart, that he starts to inspire people. This also happened in The Adjustment Bureau, for crying out loud. You know nobody liked The Adjustment Bureau, right guys?

Tom Wilkinson as Joseph P Kennedy is an unforgiving patriarch-by-numbers, and the accent he's come up with sounds oddly like Hannibal Lecter. But fine: this is basically all the character calls for. 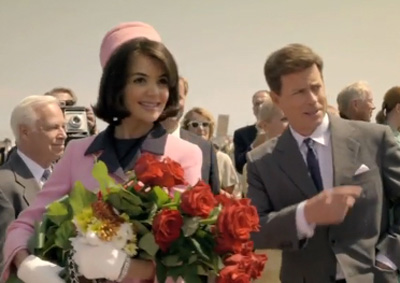 "Hey, you know what I fancy later? A ride in an open-topped car."

Cutting back and forth, using the 1960 Presidential election campaign as our anchor, we see significant events from Kennedy family history - the death of Joe Jr in the war; Jack and Jackie meeting for the first time; Joe Sr making his hey-Hitler's-a-pretty-nice-guy gaffe - and the structure works very well. The problem is in picking what to show and what not to, which is a judgement director Jon Cassar all too often gets wrong.

In episode 1, for example, Joe Sr tells an aide in 1960: "I've been thinking a lot of Joe Jr today", and there are God-knows-how-many pictures of the guy in his US Air Force uniform. Plus it's well-thumbed historical record: we know he died in the war. Cue a cutback to 1944, to show him going off to war, hugging people and telling them all he'll be OK. Which is where it should be left: the emotional impact has already been shown; nothing else needs saying. But no, Cassar just bulldozes on through and shows us what we already know.

The real test will be how the show deals with the assassinations of Jack and Bobby. Even more so than with Joe Jr's death, these are events we've seen played back ("... and to the left") a thousand times already. It'll take some nous to depict these in a way that acknowledges how familiar the events are to the audience without simply replaying them - and it's nous that The Kennedys doesn't seem to have.

Watch, eh, The Kennedys on the, eh, iPlayer.
More:  The Kennedys  BBC  Greg Kinnear  Barry Pepper  Katie Holmes  Tom Wilkinson
Follow us on Twitter @The_Shiznit for more fun features, film reviews and occasional commentary on what the best type of crisps are.
We are using Patreon to cover our hosting fees. So please consider chucking a few digital pennies our way by clicking on this link. Thanks!