The Killing (US) - season one

One dead girl, an over-involved homicide detective and an investigation set in real time ... sound familiar? Nope, I'm not talking about some weird Hercule Poirot/Jack Bauer mash-up: of course I mean The Killing, AMC's reimagining of the successful Danish show of the same name. Nominated a whopping THREE times at the first Critics' Choice Television Awards, The Killing has just reached its staggering conclusion on Channel 4 and here's what we thought of it.

Each episode is set in a grim area of Seattle, which is inherently rainy and oppressive, setting the tone really well. The show comprises 13 episodes covering a 13-day investigation and the storyline itself is three-fold.

Primarily, the plot revolves around missing schoolgirl Rosie Larsen but at the same time there is a heavy focus on obsessive Detective Sarah Linden and also an ongoing mayoral campaign headed by wannabe leader Darren Richmond.
Typically engulfed by her work, Linden lets her relationships fall by the wayside while she investigates the case. When the body of a young girl matching Rosie's description is found in the trunk of a campaign car at the bottom of a lake, Linden even delays her own wedding to find the culprit. Enter Linden's temporary partner, Holder. 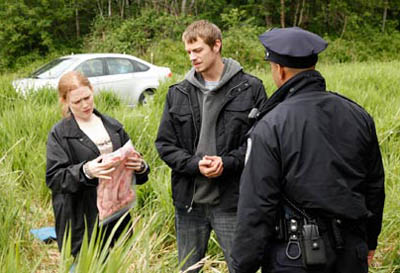 "I've told you before, Linden. You can't bring candy floss to a crime scene. It's just unprofessional."

A young rookie and recovering drug addict with a patchy past, Holder is the Ying to Linden's Yang. The great dynamic between the pair helps to lighten up what could be a devastatingly heavy-going drama. Despite the relationship between the duo, however, the show is still extraordinarily harrowing, especially in portraying the grief that Stan and Mitch Larsen, Rosie's parents, go through.

It comes as no surprise that the Larsens are broken by the news of Rosie's murder and cracks soon begin to appear in their relationships. The family is ripped apart even further when ex-mafioso dad Stan is coerced into beating up Bennet Ahmed, Rosie's teacher who is initially suspected of the murder. As Bennet is left fighting for his life in intensive care his name is cleared and Stan turns himself in, racked with guilt.

As well as Bennet Ahmed, there are several other potential suspects throughout the season, but towards the end all fingers seem to point to Darren Richmond. Initially he comes across as caring and genuine and even tries to get in touch with the Larsens to pass on his sympathies. However, leads soon emerge that indicate his connections with an elite escort agency that the not-so-innocent Rosie may have been caught up with.

Right up until the last tense moment,it seems like Linden and Holder have finally cracked the case, but just as Linden is boarding the plane to finally join her fiance and get married, a spanner is thrown in the works ... 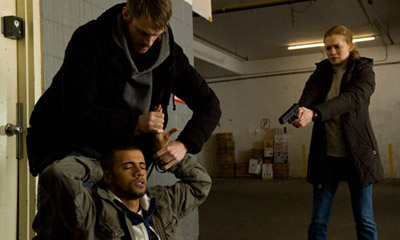 "Du er under anholdelse! Sorry, I mean: you're under arrest!"

The show is adapted from Danish counterpart Forbrydelsen, which roughly translates as 'The Crime'. Although the US version of the show has been equally successful, some would argue more so, there's no denying that Forbrydelsen is worth a watch. Like the remake, it too has been showered with praise, gaining award nominations all over the shop, and even became a huge crime hit with British viewers when shown on BBC Four earlier this year.

Sadly, it didn't get as much publicity in the US and has been somewhat overshadowed. Personally I think both are a must-see, just so you can play spot the difference with yourself. What a game.

The Killing is much like a game of Cluedo, with multiple possibilities for suspect and motive, and like any good murder mystery we're still left guessing at the end of the season. All I can say for sure is this: we can definitely rule out Professor Plum in the library with the lead pipe.

Season one of The Killing was released on DVD yesterday, and the first season of the Danish original is already available to buy with the second season coming to DVD shelves in December. The US version returns for a second season, and hopefully some concrete answers, next year.

More:  The Killing  Joel Kinnaman  AMC
Follow us on Twitter @The_Shiznit for more fun features, film reviews and occasional commentary on what the best type of crisps are.
We are using Patreon to cover our hosting fees. So please consider chucking a few digital pennies our way by clicking on this link. Thanks!