Arnie's back! Again. But this time he's really back - y'know, just like he used to say his famous saying that he said. He's BACK, and he's older and clunkier than ever so, er... yay? In fact, in this film, he looks less likely to say 'I'll be back' and more likely to say 'Aargh! My back!', amirite? Are we done here? Good, let's move on.


As comebacks go, The Last Stand is a great thematic match for this current point in Arnie's career. Telling the story of how an ageing sheriff of a small, sleepy town becomes the last line of defence for stopping a super criminal cross over into the Mexican border, Schwarzenegger's Ray is on the cusp of being 'past it'. His hinted-at military background belies a man who appears more fragile and vulnerable than he really is because, for all his world-weary attitude and old-fashioned sense of honour, Arnie's character proves himself to still be a formidable action hero. Arnie the actor, however, doesn't get off quite so lightly. 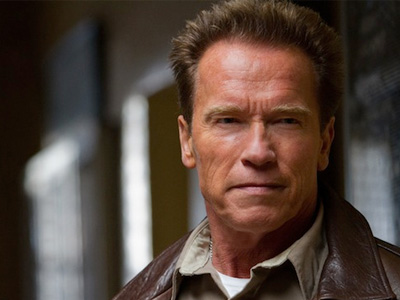 Luckily he's now impervious to criticism, as he's made entirely of leather.


It's difficult to judge an actor's performance in what is essentially a star vehicle for them but, suffice to say, if this wasn't designed to be a classic Schwarzenegger Actioner, you'd wonder what on earth he was doing in the film. Between his top-heavy, unwieldy physique and infamous guttural accent (he doesn't seem like a 'Ray', does he?), Arnie stomps his way through a role in which every punch looks clumsy and every line of dialogue sounds like it has been learnt phonetically.

The fact that the rest of the film is just as over-the-top as its star's presence is almost enough to make it all work. Almost. With an affected sense of fun and silliness, one or two misfires might have been overlooked, but the film contains far too many terrible moments to be forgiven. From the villain's ridiculously convoluted escape from police custody at the start of the film, to Arnie's heavy-handed rousing speech rallying the troops, this is a movie that makes little sense and contains few surprises.

There are early set-ups that you know will pay off later (right at the start, Arnie is given the keys to a flash sports car to look after... and we're expected to believe we'll never see it again). There are terribly ill-timed character moments (a younger love-interest couple helping Arnie in his mission realise their feelings for each other mid-shootout). There are an indefinite number of bad guys to kill in what seems like an empty attempt to keep the bodycount high. And there are huge, thundering script-farts of dialogue at every turn, including an assertive "I don't know you and I don't answer to you", a post-kill clunker of "Welcome to Sommerton" and, my personal favourite, "My honour is not for sale". 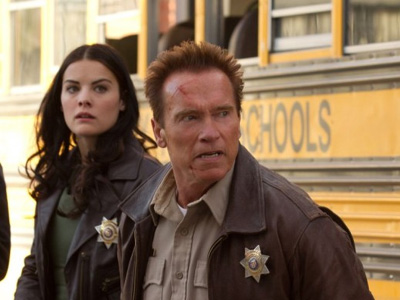 
Luckily, the film does action well and, when the the escaping drug cartel leader does eventually make it to Schwarzenegger Town, the final act is non-stop shoot 'em ups, beat 'em ups and chase 'em downs. Bullets fly everywhere as if they were ineffectual, but then there are some great fist-pumping head shots and other inventive kills to keep the Saturday night drinking crowd whooping in their seats. The extended shootout also leads into a truly fresh 'blind' car chase through a cornfield, which allows for both a tense pursuit and brilliant sight gag.

The film also has its strong comic moments too, with Luis Guzmán and Johnny Knoxville acting the idiot and the wacko respectively. It's goofy humour, but in a movie that could have easily been too po-faced, it serves as welcome comic relief. Indeed, it's telling that, in what is supposed to be Arnie's return to his action roots, its his comic timing that produces the best results with a single reading of the word "obliged" acting as the film's funniest moment.

Then, as the film reaches its inevitable showdown, the fun trails off again to be replaced by relentless slugging and the unshakeable feeling that Forest Whitaker should be doing better things with his time. All in all, the film is stupid, brainless action with few high points, but there's certainly no doubt that Arnold Schwarzenegger has returned. It's just a shame that the rest of us have all moved on.

More:  The Last Stand  Jee-woon Kim  Arnold Schwarzenegger  Jaimie Alexander  Johnny Knoxville
Follow us on Twitter @The_Shiznit for more fun features, film reviews and occasional commentary on what the best type of crisps are.
We are using Patreon to cover our hosting fees. So please consider chucking a few digital pennies our way by clicking on this link. Thanks!