Following the world-building original and the Batman-fronted follow-up, the LEGO brand is now so well established in cinematic terms, the spin-offs don't need an additional brand in the title. The first movie in the seemingly boundless LEGO universe without a direct connection to the others, think of The LEGO Ninjago Movie as an expansion kit from the 2014's original pack. (*marketing voice*) The LEGO Ninjago Movie contains new and exciting characters and locations, including ninja weapons, robot mechs and limited edition dragon missile thrower! (Pathos and charm required from original LEGO Movie, not sold separately).


What we have here is a movie that looks like a LEGO movie and makes you laugh like a LEGO movie but it doesn't necessarily feel like a LEGO movie: the deeper level that's usually beneath the bricks is notable by its absence here. That's not to say The LEGO Ninjago Movie isn't fun - it really is - but without a true emotional payoff, it just feels like a regular playtime session as opposed to a more meaningful experience. (If you've seen a more affecting scene in a recent kids' movie than the 'father and son' twist at the end of the first LEGO Movie, I'd love to see it, because that shit cut me deep). Still: Ninjas! Robot mechs! Dragon missile throwers!

You know how a lot of movies have amazingly charismatic villains but you just never see enough of them? Not a problem here: the makers of The LEGO Ninjago Movie know that goofy four-armed warlord Garmadon (the brilliant Justin Theroux) is the movie's trump card, so it's built around him and he's deployed liberally, even in the bits he really has no business being in. Yes, Garmadon is an evil overlord hell-bent on ruling the city of Ninjago, but he's also absent father to Lloyd (Dave Franco), a normal kid who moonlights as the Green Ninja, part of a Power Ranger-esque cadre of martial arts heroes who are dedicated to protecting the city. It's your classic 'chosen one', I-am-your-father-type scenario, only imagine if Star Wars started with Darth Vader accidentally butt-dialling Luke on his birthday. 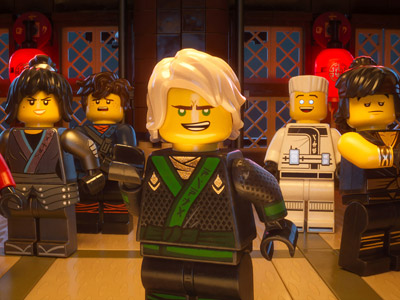 
The LEGO Ninjago Movie sets itself up with about five stock jokes that it repeats with varying results. For example, Garmadon pronouncing his son's name "Luh-loyd" is funny every single time, as is every appearance of Meowthra, a giant beast who terrorises the city who is literally just a cat. One of the five ninjas, voiced by Veep's Zach Woods, is called Zane, and his quirk is that he's clearly a robot disguised as a teenager; he continually breaks scenes in which characters react to unfolding events by delivering rote mechanical dialogue like "SHOCK" and "CHEERING". It's funnier if you've ever seen an episode of the LEGO Ninjago TV series, which features the same set of characters, including Zane, who is just a normal kid, so the filmmakers literally just turned him into a robot because they thought it was a good gag (it is).

It's a bit of a shame the rest of the ninjas are mostly non-jas: even though they all have their own elements, they're all pretty indistinguishable from one another in battle. That's perhaps The LEGO Ninjago Movie's biggest problem, which it inherited from its forebears: that the cute faux "stop-motion" animation style really does not lend itself to high-tempo action scenes - brains older than 12 years old may have a hard time keeping up with the visuals. The same goes for the Kung fu fight scenes, all of which are painstakingly choreographed (by star Jackie Chan no less) but executed with all the panache of two kids frantically smashing LEGO bricks together.

Nonetheless, there is LOADS for adults to enjoy here (there's even a Locke joke!) and the humour is pitched just far enough over the heads of wee ones for ticket purchasers to get their money's worth (the joke about the Fuschia Ninja made me cover my mouth to stop from laughing too loud). We'll probably have to wait until The LEGO Movie 2 and the return of Lord and Miller for the next truly great LEGO movie, but Ninjago suffices in a pinch - and the sight of multi-limbed bad guy Garmadon acting like there are two people 'making out' with him is one of my favourite things I've seen in a cinema all year.

More:  LEGO  The LEGO Ninjago Movie  Charlie Bean  Paul Fisher  Bob Logan  Dave Franco  Justin Theroux  Jackie Chan
Follow us on Twitter @The_Shiznit for more fun features, film reviews and occasional commentary on what the best type of crisps are.
We are using Patreon to cover our hosting fees. So please consider chucking a few digital pennies our way by clicking on this link. Thanks!