By all accounts, The Love Witch is a magical experience; a film that turns the clock back to champion a cult genre and offers a unique take on female empowerment at the same time. But as with all magic, there are always a few dissenters who have to point out the wires or, like those people that are deemed insusceptible to hypnosis, just don't seem willing to buy into it. I'm sorry everyone, but I think I’m one of those people. Not for want of trying - I was ready to be head over heels for this film, but there’s no denying it: I just haven't fallen under The Love Witch's spell.


It’s a hard film to resist though. This colour saturated world of hokey pocus is truly intoxicating. Everything from camera framing, awkward acting pauses, hammy dialogue, whimsical music and a big folksy set-piece works towards a masterful recreation of 60s horror-erotica; it just cannot be overemphasised how utterly flawless the execution is of this movie time capsule. I just can’t help but wonder what higher purpose it is all supposed to serve.

It takes itself too seriously to be a pastiche, and yet it is too self-aware to merely be an homage. The result is a film that is so of the time, that you could just as easily be watching any other film of the same period and genre, and I’d like to believe that there should be more to it than that. Of course, the argument is that the style adopted for this film is merely a delivery system for making an important point about gender politics, but either way there can be no denying that this entire film is resting on a gimmick. And it feels like the gimmick doesn’t really go addressed. 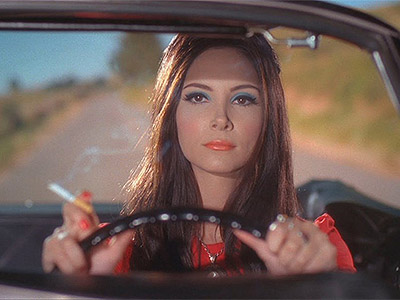 Rear projection is a metaphor for the glass ceiling, right?


I’m not saying that The Love Witch should have gone full Garth Marenghi… but I am saying that I almost certainly would have enjoyed it more if it did. Although I am also fully prepared to believe that even suggesting that is hugely insulting and that I definitely just 'don’t get it'.

There is still lots to enjoy in any case, not least the deliberately hollow performances. Samantha Robinson completely inhabits her role as Elaine, the titular sorceress so desperate for love she uses a brew of potions, womanly guile and a willingness to be subservient to male fantasies to ensnare her besotted victims until they are reduced to emasculated, sobbing messes. Meanwhile the supporting cast bring the occasional laugh, with Jeffrey Vincent Parise in particular providing the funniest character moments in the film, charting goofy hound dog to whimpering puppy in just one lustful night. 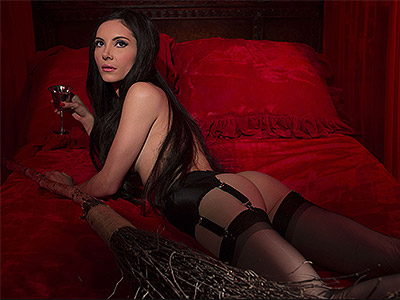 Also, there are lots of bums.


All in all though, the real passion on display here is that of writer-director Anne Biller, who laboured over this film for seven and a half years and who even served as set and costume designer for much of the production to stage the film perfectly. And it shows – not as a film that suffers from a low budget, but as a film that has clearly been the subject of as much slavish devotion as the Love Witch herself.

Sadly, this also translates as self-indulgence when it comes to the film’s running time, which stands at a decidedly lumbering two hours. It’s a stretch that feels even longer because the film goes for tribute over fun; it worships more than it entertains. And as such, it feels like a film to admire rather than enjoy.

But then that’s just me. I wouldn’t say that I’m squarely in the key demographic for feminist retro fantasy films, and that’s ok. So I am left impressed by a film that I just didn’t connect with. I have been utterly seduced, I’m just not in love.

More:  The Love Witch  Anna Biller  Samantha Robinson  Jeffrey Vincent Parise  Laura Waddell  Jared Sanford
Follow us on Twitter @The_Shiznit for more fun features, film reviews and occasional commentary on what the best type of crisps are.
We are using Patreon to cover our hosting fees. So please consider chucking a few digital pennies our way by clicking on this link. Thanks!