The action hero has come a long way since the 60s. Once calm, unobtainable specimens of perfection have gradually morphed into tough, emotionally closed anti-heroes, and then into testosterone-fuelled musclemen, and now they're flawed and troubled characters in touch with their - ugh - feelings. Superheroes are forever in search of their own life purpose (the clue is in the word 'superhero', guys), lone wolf cops have money worries, even Tom Cruise is now contractually obligated to have his character make at least one mistake in his movies. And James Bond cries now. He actually cries. So call it an adaptation, a rehash, another unoriginal concept in a Hollywoodland bereft of creativity, or whatever - The Man From U.N.C.L.E. is still one of the most refreshing action films you'll see this year.


The Bond comparison is an apt one to make, with the Man From U.N.C.L.E. TV show originally devised by 007 creator Ian Fleming as a way of putting the secret agent on the small screen. In the guise of Napoleon Solo, this super-charismatic, super-resourceful, super-with-the-ladies superspy is everything that we associate with Early Bond. He's smart, witty, sophisticated and deadly. And while Guy Ritchie's big-screen take on the show lacks a lot of the latter, it has secret suitcase compartments full of everything else. The result is a stylish, sexy, quintessentially-60s spy thriller that puts 'fun' at the top of its hit list.

Taking his cue from the cool-as-a-cucumber-martini template laid down by original lead Robert Vaughn, Henry Cavill's Napoleon Solo becomes the star of the show by default of being brilliant to watch. As a former expert art thief serving his prison sentence in the employment of the CIA, Solo has all the skills of the best person you could ever dream of being. He's light-fingered with jewellery and heavy-handed with his charm offensive, and he is always, constantly, unfailingly unflappable – some might even say to a fault. 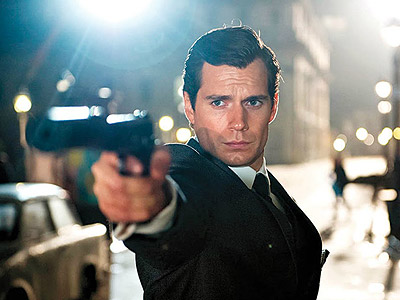 Not shaken, not stirred, not even 007. No, honestly. Promise.


By contrast, Armie Hammer's Illya Kuryakin often, and often unfairly, becomes the butt of the joke. In the frequent pissing contest between the two leads, Kuryakin is the more efficient and brutal, and he often gets the upper hand, particularly when it comes to showing off Russia’s superior technology. But being a giant brute of a man who stands apart from the ‘norm’ of Western attitudes means that a lot of dialogue occurs at his expense. Also, any Man From U.N.C.L.E. purists that might still exist (anyone? Anyone?) will puzzle over, and possibly even resent, the decision to give him severe anger control issues to overcome throughout the movie. David McCallum would be rolling in his (*checks Google*) armchair.

None of this is helped either by Hammer chewing over his Russian accent with every word, although to be honest the film suffers from this in general with none of the cast speaking in their own natural accent apart from – of course – Hugh Grant.

The biggest and most pleasant surprise of the film, however, is Alicia Vikander , whose reluctant-yet-feisty Gaby is an innocent participant forced to go undercover with the two agents. With a strong, no-nonsense attitude and several scene-stealing moments (her drunken dancing is a highlight), not only does she match the leads for on-screen magnetism, but she is frequently the most watchable person in the film. Expect paragraphs singing her praises in the next 'Why Aren't There Any Decent Movie Roles For Women?' article you read. 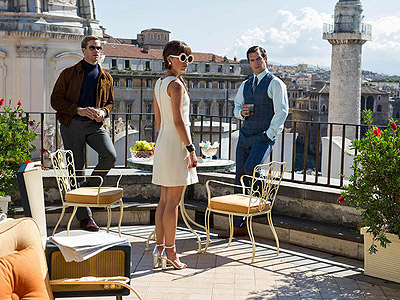 Although this is still the only good pic I could find of her in the film.


And that’s the best of what you need to know, because this is a film that lives and dies by its characterisation and its perfectly cast cast. The overall plot, which sees Solo and Kuryakin forced to team up to find Gaby’s missing nuclear scientist father, is merely a framework for the innuendo-laden interplay between them. The first half, filled with all the super-sexy-spy fun, plays better than the second half, which at one point feels very much like the worst part of an old Bond film: the bit where he always storms the supervillain’s lair.

Meanwhile Guy Ritchie puts his hyper-stylised direction to great use, with panels, swipes and non-linear editing coming into play to keep the action gliding along, and to really sell the 60s setting with just the right amount of Saul-Bass-ian design. An over-dependence on flashback 'reveals' to things that happened just 30 seconds previously (resulting in lots of scene repetition) quickly becomes irritating rather than impressive. But the mega-cool spy soundtrack and lots of neat camera tricks along the way help to make up for it. 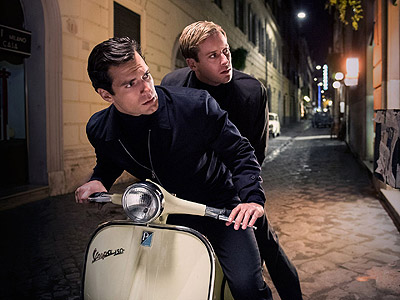 And so much fashion. So much trend.


Most of all, there’s the sense that a throwback hero who is always smooth and practically flawless doesn’t actually have to be such an outdated concept. With Daniel Craig’s Bond reboot taking an obvious steer from the grittier spy action of the Bourne franchise, this film might just make a convincing argument that Craig’s replacement could go down the slightly camper direction of his very early predecessors and not be completely silly. It might even be a whole lot more fun.

More:  The Man From UNCLE  Guy Ritchie  Henry Cavill  Armie Hammer  Alicia Vikander
Follow us on Twitter @The_Shiznit for more fun features, film reviews and occasional commentary on what the best type of crisps are.
We are using Patreon to cover our hosting fees. So please consider chucking a few digital pennies our way by clicking on this link. Thanks!