I'm not quite old enough to have enjoyed The Muppet Show the first time around, so despite being a fan of Labyrinth and The Dark Crystal and all things Henson, I never really had Kermit and co as cultural touchstones growing up. However, even without that built-in base of nostalgia, I can wholeheartedly recommend The Muppets' big-screen comeback to moviegoers young, old and in between – I can't remember the last time I giggled so long and hard at such wanton silliness.


The Muppets' appeal has not waned – they are still as they were: small, cheap-looking constructions of fuzzy felt, ping-pong balls and bits of string, but utterly lovable and tactile and full of life. The difference between a person interacting with a 'real-life' Muppet and someone doing the same with a CG creation is chasmic. Kermit the frog – basically just a green sock with a hand in it – is still capable of conveying more emotions with a scrunch of his face/fist than a whole army of Robert Zemeckis' mo-capped monstrosities and their button eyes and botox brows. 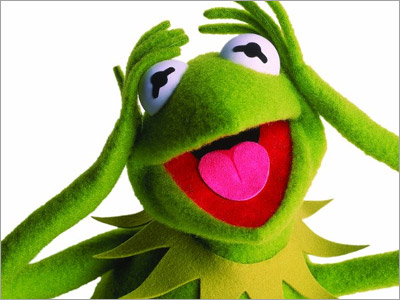 That's right, Kermit. I went there.


Typically, the movie's plot is heavy meta - the usual tongue-in-cheek nonsense about the gang trying to get organised for a comeback via a montage here and a musical number there. What separates this movie from all the other movies, however, is the element of nostalgia – as in real life, the Muppets' achievements have almost been forgotten. At one point, Kermit – who lives in a large mansion with an 80s robot butler – sings a song called 'Pictures In My Head', about his fading memories of The Muppet Show and his worries about being out of touch ("Would anybody watch or even care? / Or did something break we can't repair?"). Did you see that kind of respect lavished on The Smurfs, or Yogi Bear? Of course you didn't.

That's mostly due to star and co-writer Jason Segel – the Muppet enthusiast who put together a vampire puppet musical in Forgetting Sarah Marshall – who shows the utmost care in revitalising his handheld heroes for a new generation. There's little in the way of up-to-the-minute pop culture jokes; few distracting celebrity cameos of note; no one uses Twitter or wears Heelies or talks about the Kardashians in an attempt at crude reinvention. Everything about their comeback is pitched perfectly: the only reason this film exists is because all involved shared a mutual love and adoration of The Muppets. In an era dominated by money-spinning franchises, cynical remakes and movies based on board games, that's a rare thing indeed. 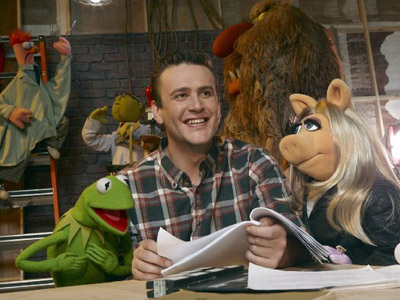 Beaker will never not be funny.


Segel and co-star Amy Adams strike the right tone as the human element – hyper-excitable and game for a laugh – as does Chris Cooper, working the audience for every boo and hiss he can muster as cartoon villain, Tex Richman (trust me when I say his impromptu rap is a highlight). Former Conchord Bret McKenzie contributes the most in terms of humour with the movie's original songs – rainbow-bright bursts of sheer joy that'll take up permanent residence in the grooves of your brain. Right from the opening number, everything in Muppetworld just feels wonderful and fabulous and happy. There isn't a single moment that isn't soaked in sunshine. It's what I imagine getting dick-slapped by a unicorn feels like.

Not only is The Muppets a brilliant family adventure movie, packed to the brim with wit and character and songs that demand to be sung from rooftops, but it's a perfect example of why new isn't always better. The Muppets are, and always have been, a bunch of sweaty men with their hands crammed up the arses of various felt farmyard animals, but it's that same lo-fi charm that's so much more endearing than the cold, calculating pixels of CG creations. Adults may feel a sense of pride when watching The Muppets in action; kids will probably want to hug them; everyone will love them.

More:  The Muppets  James Bobin  Jason Segel  Amy Adams  Chris Cooper  Bret McKenzie
Follow us on Twitter @The_Shiznit for more fun features, film reviews and occasional commentary on what the best type of crisps are.
We are using Patreon to cover our hosting fees. So please consider chucking a few digital pennies our way by clicking on this link. Thanks!