Nicholas Winding Refn is proving to be one of the most divisive filmmakers working today. Between his last feature, Only God Forgives, and now this, it seems that Refn is intent on using surreal, striking imagery to replace conventional narratives. Is this iconic iconoclasm of the medium deliberate contempt for modern cinema or playful adoration? And is his output polarising purely because of his obvious, spiteful defiance of the mainstream or because it might actually lack merit? Either way, this kind of issue so often detracts from any real critique of his work. For example, I haven't seen anyone so far talk about the biggest problem with The Neon Demon: the inaccurate depiction of modelling. I've watched America's Next Top Model, and not once in this film did anyone 'smize', nor even 'poochie tooch'.


Of course, that's not to say that the film doesn't look pretty. In fact, there is no possible way to overstate exactly how gorgeously lavish every scene of The Neon Demon is. It is often said of a beautiful-looking movie that you can take any frame out and hang it on your wall, but Refn practically reverse-engineers that idea here, meticulously producing bold, rich artwork for the cinematic form. By comparison, every film before it looks like it has just been run through the Mayfair filter on Instagram. 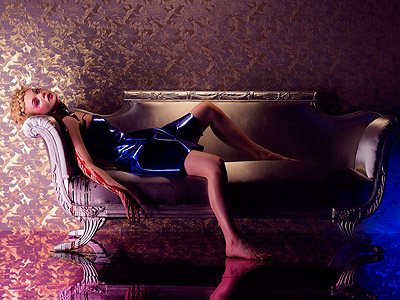 I don't know about you guys, but I am totally sold on that dress now.


But, just like Elle Fanning's Jesse, the timid, virginal ingenue of this film who moves to LA to become a successful model, The Neon Demon tries to get by on its looks alone. As Jesse befriends a make-up artist Ruby (Jena Malone), puts up with the bitchiness of two rival stick-insect models, acts as a muse for photographers and fashion designers alike, and puts up with the aggressive advances of her violent slum landlord (Keanu Reeves, for some reason), The Neon Demon starts to feel like it doesn't actually have anything particularly interesting or original to say about the modelling industry.

We get it immediately: it's a predatory, narcissistic arena and everyone that Jesse meets wants a piece of her in some way, whether it's sexual, for creative inspiration or, in the case of new boyfriend Dean, to possibly help advance his own career as a photographer. But that's been the case for every 'new girl moves to the city to become a star' movie ever made. For all the incredible visuals, this film is backed up by the same plot as Journey's Don't Stop Believin'.

Well, OK, not exactly the same. As the film heads towards a conclusion, its final act takes on more of a literal interpretation of its own themes. It doesn't give us complete clarity on proceedings (I don't remember Journey ever singing a verse about extreme menstruation or necrophilia), but it does offer some gruesome, yet beautifully bizarre, closure to the story. 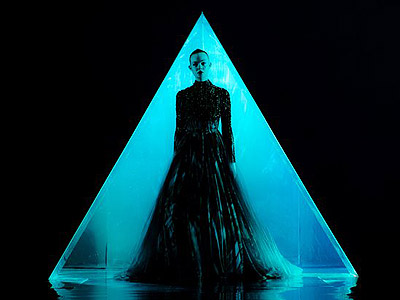 This is probably supposed to be a vagina or something.


As expected, anyone's enjoyment of Neon Demon will depend on how much they can get on board with Refn's style, and even then there are still limits. His glacial pacing sets the macabre tone perfectly, but it still helps to have something interesting to look at rather than, as happens midway through this film, 15 minutes of slow-zooms in and out of empty rooms.

And yet the real crux of finding value here comes with a willingness to let go of the intangible imagery in favour of just admiring the aesthetic. Because it is in the latter aspect that Refn totally, as Tyra Banks would say, "works it, baby! Wooooooo!".

More:  Neon Demon  Nicolas Winding Refn  Elle Fanning  Jena Malone  Keanu Reeves
Follow us on Twitter @The_Shiznit for more fun features, film reviews and occasional commentary on what the best type of crisps are.
We are using Patreon to cover our hosting fees. So please consider chucking a few digital pennies our way by clicking on this link. Thanks!