You may think that The Purge: Election Year has been smart in piggybacking the US electoral campaign, but in actual fact, it suffers in comparison to current real world politics: in case you needed reminding, one of America's presidential candidates has already advocated the assassination of his rival and has claimed that he could shoot someone dead in the street and still not lose any voters. Donald Trump's car crash campaign makes legalised murder look pretty tame in comparison, leaving The Purge: Election Year struggling to stay relevant: if the first Purge movie was a high concept in search of a budget to match and sequel Anarchy was a satisfying exploration of that world, Election Year takes the concept to its ludicrous and illogical extremes.


Here's hoping you like your political satire heavy handed, because The Purge: Election Year is a bona fide knuckle-dragger. This is a movie that literally needs to have knife-wielding characters dressed as Uncle Sam and the Statue of Liberty deliver its message with all the subtlety of a blunt instrument to the skull. We briefly touch on an interesting philosophical point - that the government targets low-income citizens on Purge night to reduce the need for welfare and housing - but this is not a political movie in any sense: it's more interested in counting bodies than it is votes. 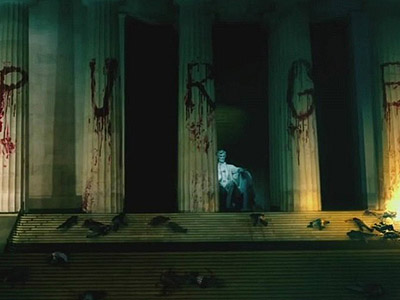 An image so blisteringly satirical, I'm going to submit it to The New Yorker.


It's no exaggeration to say that every character in The Purge: Election Year is thick as pig shit. Supposedly smart politicians take 30 seconds longer to understand important plot points than you do. Secretive freedom fighters leave fully annotated assassination plans on pin boards in their office without even closing the door. A man frequently risks his life for his shit fucking deli, apparently under the illusion that what people want more than anything on Purge Night is to target small-to-medium sandwich restaurants. Every character is doomed to utter tin-eared dialogue from the movie's abysmal script; every other kiss-off or post-kill pun is some variation of "Fuck" or "Motherfucker". Worse, it's full of racially insensitive lines like:

"
"
"There's a whole bunch of negroes coming this way, and we're sat here like a bucket of motherfuckin' chicken!"
I swear to god, this movie has an Angry Black Male character who refers to fellow African-Americans as "negroes", communicates with them via 'crip whistles', jokes about his race's propensity for gun violence and says things like "Sheee-iiiiit!" I should remind you that every word of The Purge: Election Year was penned by writer-director James DeMonaco, who is very much an affluent Hollywood white guy. Knowing that information, the only way to read lines like "All I care about is waffles and pussy" is as extraordinarily racist - hardly what you want when the movie preaches at length about white on black crime. Black lines matter.

The Purge: Anarchy was also a disjointed mess but it was crammed full of ghoulish imagery and nightmarish visuals. Election Year runs a great mask game - seriously, the masks in this movie are way cooler than any other masks you may have seen in previous movies - but the visuals are hollow. Purgers are prone to arriving on the scene in full Halloween regalia, twisting and writhing in slow-motion to an angry metal soundtrack, sometimes for minutes at a time, and all you can think about is how ridiculous they'd look at normal speed without a Marilyn Manson track backing them. Quite silly, I'd imagine. The most chilling scene of any of the Purge movies remains the redneck in the 2013 sequel seen taking his sniper rifle and a six pack up to his roof. Everything here is overblown to a hysterical degree; by the time you get to the cackling bishop brandishing his shotgun, the movie has gone full cartoon and any gritty realism strived for has been completely sandblasted. 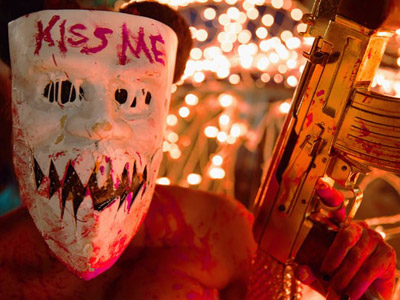 At least Michael Myers knew where to draw the line.


Not only does Election Year lack the visual zing of its predecessor, it's straight up a more shoddily made movie. Cuts are clumsy: one scene sees Frank Grillo tell his politician ward to "Run... As fast as you can!", then cuts to a shot of them walking casually like they're popping to the off licence. The slow-mo button gets hammered throughout, even on entirely inconsequential scenes like characters walking down corridors, presumably in an attempt to create artificial drama. One dude gets introduced, is named, and then is killed approximately two minutes later after contributing approximately fuck and all to the movie's narrative. This isn't movie anarchy, this is screenwriting apathy.

No one expects Purge movies to pass serious comment on socio-political issues (just like no one expects Halloween movies to have a hot take on knife crime), but if you're going to call your movie Election Year then you'd better have a more cogent grasp of politics than the sixth-form-level understanding displayed here. The only mandate this movie had was to go crazy with a still-winning concept, but it gets bogged down in issues it clearly doesn't understand or have any intention of addressing. Fundamentally, The Purge: Election Year fails because it's unable to present a terrifying vision of the future that is more frightening than the prospect of President Donald Trump's America.

More:  The Purge  The Purge Anarchy  The Purge Election Year  James DeMonaco  Frank Grillo
Follow us on Twitter @The_Shiznit for more fun features, film reviews and occasional commentary on what the best type of crisps are.
We are using Patreon to cover our hosting fees. So please consider chucking a few digital pennies our way by clicking on this link. Thanks!