The Raid is a martial arts movie of such ferocious pace, you'll swear you're watching it on the wrong speed. A shaken-up energy drink of a movie, once unleashed it fizzes out of the can, leaving you adrenalized – and sticky. It's the kind of unapologetic action movie – shorn neatly of any unnecessarily frills – that knows its strengths, has a clear goal and homes in on it with laser precision. Entertainment, truly thy name is an Indonesian guy killing a bunch of criminals with a fridge.


Distinctly videogame-esque in design, The Raid sees SWAT grunt Rama (newcomer Iko Uwais) embark on takedown mission: storm a Jakarta tower block, level by level, to find and capture ruthless criminal boss Tama (Ray Sahetapy). Each floor brings swathes of disposable new enemies, all with apparently unlimited ammo. It has cut-scenes that break up the carnage, complete with dialogue lifted straight from the arcade. It even has an end-of-level boss in the form of the savage Mad Dog (Yayan Ruhian). The Raid may well be the greatest ever videogame that was accidentally a film. 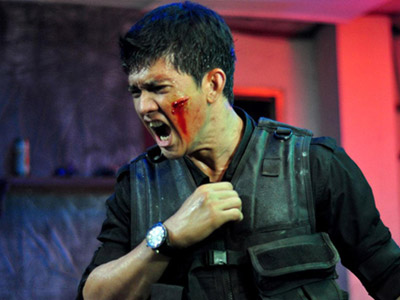 
Director Gareth Edwards (a Welshman) and his star Uwais (native Indonesian) mark themselves as a star pairing to watch. Despite shooting at a near suicidal pace, Edwards' spacial awareness frames the action perfectly, leaving Uwais to punch, kick, headbutt and stab to his heart's content within the framework his director has set. Some filmmakers will use choppy editing to make a fight scene look frenzied; Edwards doesn't need to cut. Uwais is such a naturally talented martial artist, at times it feels like he's faster than the camera can capture. Don't blink, is my advice.

Aside from countless bouts of henchman smashing in the block's endless corridors – all of which won't fail to make you squeal in sympathy – Edwards excels in all of his set-pieces. An early encounter on a pitch black stairwell throbs with tension before exploding into a teeth-rattling gun-fight, while a game of hide and seek with Rama concealed behind a wall is obscenely fraught. The ultra-violence isn't just glorified for the sake of excessive gore; it ups the threat level significantly. Heroes get hid, bleed and even die. 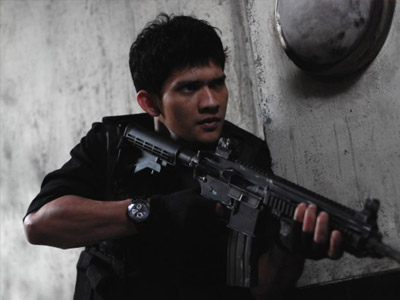 Spoiler alert: he fires it.


Despite The Raid's relative lack of ambition (it is, after all, a glorious mash-up of everything Johns Woo and Carpenter ever did), Edwards and Uwais inject a freshness into every scene. Even the final fight – a near endless, three-way dust-up that makes use of ample props, walls and surfaces – never outstays its welcome, culminating in a moment of such crowd-pleasing, Daily Mail-sickening euphoria, you'll feel compelled to spontaneously applaud.

That audience factor will play a big part in your enjoyment of The Raid – I have no doubt that watching it with a willing late night crowd elevates it to five-star territory. In the cold light of day, it's a little lacking in plot and character development, but films this turbo-charged are not meant for frame-by-frame analysis. You don't stop a cheetah from running to critique its technique, and you don't stop to think about The Raid – it doesn't give you one single chance to fight back.

More:  The Raid  Gareth Evans  Iko Uwais  Fighting  Action
Follow us on Twitter @The_Shiznit for more fun features, film reviews and occasional commentary on what the best type of crisps are.
We are using Patreon to cover our hosting fees. So please consider chucking a few digital pennies our way by clicking on this link. Thanks!