Set against the backdrop of the Vietnam War and dealing with issues of racism and segregation, this tale of four women struggling against the odds is a hard-hitting... no wait, it's an Aussie comedy about some singers. Don't worry, forget all that other stuff – the film certainly has.


Those turned off by the cutesy poster boasting glamorous wannabes in sequin dresses may be pleasantly surprised by how enjoyable the film is as a whole – it turns out this is no teen fantasy for Gleeks. Don't get me wrong, The Sapphires is the fluffiest piece of fluff seen in cinemas since Harry Knowles spent an entire screening picking his belly button. But with an acerbic Aussie wit running through it, and with frequent attempts at Real Serious Drama Stuff, it is actually a much more mature film than many will be expecting.

This is a tale of three singing aboriginal sisters who, when discovered by a failing-at-life Chris O'Dowd, join up with their estranged cousin and leave their small outback town to entertain troops in Vietnam. There's some inner-group tension, a little racial commentary, a bit of will-they-won't-theying and some lesson-learning about taking responsibility, but essentially that's it: some girls like to sing so they decide to do it in Vietnam. It’s basically an Australian Dreamgirls, with O'Dowd at the helm. 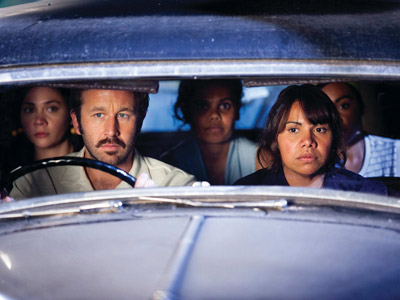 
And thank god he's there. If you weren't sold on his transfer to Hollywood based on a small part in Bridesmaids or his doofus villain in Gulliver's Travels, then he might finally win you over here. Since we first see him, MC-ing a local talent show with a stonking hangover, O'Dowd effuses a sadsack charm that's wins every scene. Between LOL-worthy one-liners, such as yelling "That's a sack of dicks!" in protestation to his boss early on, and providing much heart in an otherwise stagey story, he is easily the most watchable talent in the film.

That's not to say that the girls - the stars of the story - don't hold their own, but they rarely stray outside of fish-out-of-water territory. This is in spite of each having their own subplot: Gail is the mumma bear struggling to protect her cubs, youngest Julie leaves behind a child, Cynthia recently got dumped at the altar and the lighter-skinned cousin Kay struggles with her own identity as a black woman. Each of these facets to the larger story are introduced and revisited only when the script seems to require some added drama, but they all ultimately feel ignored; sidelined in favour of a far more simplistic tale of singers searching for fame. 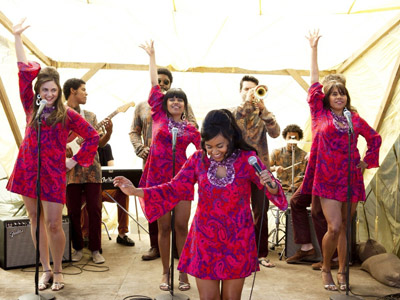 They're all really miserable on the inside. Apparently.


And this happens to be the film's biggest problem. While it’s wrong to criticise what is a comedy above all else for not spending enough time being dramatic, the script frequently calls on different plot threads to turn suddenly serious and then forgets them at will. By the time Martin Luther King's murder is announced for a single unnecessary moment of emotional heft, it's easy to see that the film is cheating just a little bit.

Overall, it's apparent that the film is cutting corners elsewhere too. Exactly why has everyone agreed to go to Vietnam so suddenly? And with a strange Irish fella they have just met? Even the success that the girls experience overseas doesn't feel earned because, despite one rehearsal montage early on, there's no sign of any of the sweat and hard work that helped them to achieve it.

And yet, what do you really want from this film? If it's an exploration of racial struggles and the adherence to one's own cultural heritage, then... I dunno, go read a book or summink. However, if you want an uncomplicated film in which energetic soul songs are dubbed over a lip-syncing girl group while Chris O'Dowd shouts "sack of dicks", here you go.

More:  The Sapphires  Wayne Blair  Chris ODowd  Deborah Mailman
Follow us on Twitter @The_Shiznit for more fun features, film reviews and occasional commentary on what the best type of crisps are.
We are using Patreon to cover our hosting fees. So please consider chucking a few digital pennies our way by clicking on this link. Thanks!