The Secret Life Of Walter Mitty

It has become a Hollywood truism that, since the advent of CGI, it is now possible to put literally anything up on the big screen as long as there’s a large enough suitcase of money involved. There are no limits anymore. Movies can now show us scenes that are beyond anything we can possibly imagine, such as alien spaceships or giant dinosaurs. Well, ok, I suppose we can all imagine both of those things. What about... a time before the universe existed? Or climaxing pastry? Anyway, movies can deliver it all. And now this film, about a hopeless fantasist swapping his daydreams for a real-life adventure, gets to play with those rules. The potential for visual spectacle is limitless. There are literally dozens of funny voices Ben Stiller can use.

You'd be forgiven for going into the film assuming that this is all it boils down to: a series of outlandish sketches and scenarios pulled together under the thin plot about someone who lets their imagination run away from them. This is after all Ben Stiller, the wacky star of Zoolander and Dodgeball, right? The concept is ripe for silly antics. And yet this isn't entirely the truth. It's er... only half of it.

Exactly half, in fact. Because never before has a 'dramedy' had such a clear division between its drama and comedy segments. As Stiller's Walter Mitty indulges in his flights of fancy, Stiller indulges in his comedic side, presenting funny asides, such as a Benjamin Button style geriatric baby or a ridiculous action-packed, road-surfing fight scene. Then, as Mitty slowly becomes embroiled in his own real life adventure, his frequent idealistic daydreams are replaced by a genuinely inspirational journey, and humour is swapped out for uplifting triumph.

And so it is that audiences enjoying an hour of Stiller-styled comedy may find the second half of the film a little too melodramatic and, dare I say it, cloying. Likewise, those expecting the life-affirming drama suggested in the trailers may find some of the early humorous asides a little... childish. 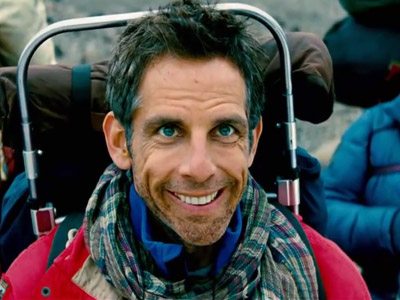 Yet the overall genre disparity is only something to remark upon in hindsight. Throughout the film, the tonal shift is actually almost seamless. Stiller in the lead role holds the film together by always managing to strike the right balance between funny and serious in any given scene. More importantly, as Mitty learns to give up his reliance on escapism, the CGI-heavy fantasy sequences are replaced by the equally impressive real-life sweeping landscapes of his globe-trotting adventure. It’s a gradual change, but one that not only keeps up the film’s spectacular visuals, but works within the film’s context too, backing up its central message: the real world can be better than anything in your imagination.

And yet, as Mitty’s rousing journey to track the legendary photographer that sent him a misplaced image negative is set in motion, the movie starts to lose a little bit of its sense of fun. Even when he isn’t in full daydream mode, Mitty’s imagination allows for several neat touches that add to the viewing entertainment, but it’s a visual flair that is sadly waylaid by the more dramatic elements of the story as the plot progresses. And no matter how extraordinary Mitty’s mountain-trekking backdrop may be, you’ll still find little tricks like on-screen text and background gags far more interesting. 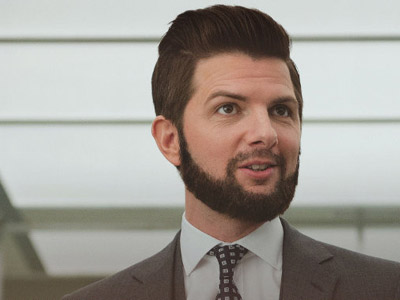 Overall, there are many nits to be picked: Mitty is supposed to be an incorrigible daydreamer but this still feels like something we are really told rather than shown, and it never feels like he needs that much of a push to become a remarkable hero in real-life. But it’s hard to hold a grudge about these things when the film delivers such a triumphant story filled with just as much hilarity as wonder.

When your two favourite parts of a movie are a stupid throwaway gag and a triumphant song sequence (which, in this case, sees love interest Kristen Wiig sing encouragement for Mitty to jump on a moving helicopter), you know this is a film that has adequately managed to straddle both genres. Although, there’s still a part of me that wants to see Stiller go full-on comedy with this concept. Basically, now that I’ve mentioned it, I really want to see climaxing pastry.

More:  The Secret Life Of Walter Mitty  Ben Stiller  Kristen Wiig  Adam Scott
Follow us on Twitter @The_Shiznit for more fun features, film reviews and occasional commentary on what the best type of crisps are.
We are using Patreon to cover our hosting fees. So please consider chucking a few digital pennies our way by clicking on this link. Thanks!