Hey! It's a new BBC drama! It's dark! It's moody! Anyone have a flipping clue what was going on half the time? No, me neither.

"This is loads like The Wire," said all the promo material and trailers for The Shadow Line, over and over again. "Honestly, it is; trust us. We can do drama just as well as the Americans; just give us a chance."

Let's be honest, we really can't. The US is streets ahead of the UK in terms of quality drama. Could a British writer have come up with something as original as Mad Men or Breaking Bad? Sure, why not? Would any British TV channel have commissioned it? Not a hope in hell. TV commissioning this side of the pond remains cautious and conservative, and since Brand/Ross/Daily Mail-gate, add to that list of characteristics 'terrified of offending anyone' where the BBC's concerned.

There are signs they're starting to get with the programme, though. My Family is finally going to stop after the next series (apparently because the three people who ever found it funny decided to do the decent thing and just move in together and watch the DVDs over and over again so the rest of us don't have to suffer it), and the Beeb's now trailing a season of pretty tasty-looking dramas.

The Shadow Line is one of these, and it looks promising. Take the murky-looking cold opening, deliberately long and slow, with lots of forensic scientific detail and no exposition offered, which is exactly The Wire's approach. It's mysterious enough to draw us in without spoon-feeding us back-story. 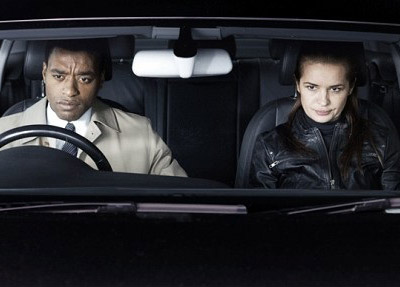 Chiwetel Ejiofor. Spellcheck suggestions for his surname include 'pianoforte', 'proforma' and 'heretofore'.

The main premise is that Harvey Wratten, a drug kingpin, has been murdered having just been released from prison with a royal pardon, and both the police and his criminal associates want to find out who did it. The main investigating cop is Chiwetel Ejiofor, who's recently back on the force after an incident in which a fellow officer died, and his criminal counterpart is Christopher Eccleston, who has his own troubles at home with a wife suffering early onset Alzheimer's.

Again, not much is given away. Her condition is presented as an absolute, with no flashbacks to show you the couple in happier times. Things are what they are. It's TV writing that never takes the easy path: similarly, we could've been shown the shooting incident that brought about the detective's sabbatical - but we aren't.

Both leads are excellent as you'd expect (though you are allowed to make TV dramas without Chris Eccleston, John Simm or Jim Broadbent you know, guys - just saying), but the standout performance is Rafe Spall playing Jay, son of the murdered gangster. He's a mad ticking time-bomb with an odd staccato way of speaking that just makes him even more menacing.

So yeah - interesting. Whether it does exactly what it sets out to do remains to be seen: I suspect that the habit of not revealing back-story might begin to strain on a multi-character show, but I'm looking forward to finding out either way. And no, ultimately it's not that much like The Wire - but then not everything has to be, you know.

More:  The Shadow Line  Chiwetel Ejiofor  BBC  Christopher Eccleston  Rafe Spall
Follow us on Twitter @The_Shiznit for more fun features, film reviews and occasional commentary on what the best type of crisps are.
We are using Patreon to cover our hosting fees. So please consider chucking a few digital pennies our way by clicking on this link. Thanks!