The Stone Roses: Made Of Stone

Makes you think, doesn't it?


Obviously I'm being facetious. The Stone Roses are great and everyone knows it. And who am I to criticise? I bet Ian Brown picked holes in my Behind The Candelabra review. "Knicker bacon sandwiches?", he probably exclaimed, "Wha't'fook's 'e on abou'?" Because that's how Mancunians talk.

But I digress. Made Of Stone is a rockumentary (*sigh*) about the resurrection of the Roses in the summer of 2012, after years in a wilderness that saw none of them get a haircut. It has two selling points: 1) it's about The Stone Roses, and 2) it's directed by Shane Meadows, which immediately makes it worthy of extra attention. Meadows' love of the band and giddy enthusiasm when asked to document their reformation, not to mention his innate skill as a filmmaker, must surely make this almost as good as, ooh, Russell Mulcahy's 1985 Duran Durangasm Arena, right? 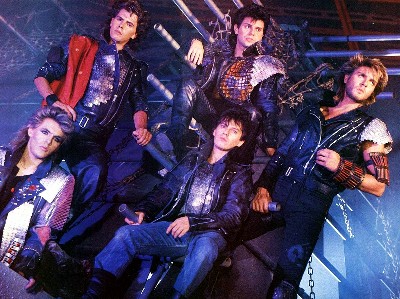 Come on, this is the gold standard and you know it.


Well, no, not really. Meadows' presence would be undetectable were it not for the odd inserts of him talking to camera, which are so few and far between as to be somewhat incongruous. He's immensely likeable and gives us a brief insight into his feelings for the band, but when we also get dozens of "normal" fans saying the same thing, what's the point?

In Meadows' defence, he has put together a great concert film. Footage of the boys (they still act like boys, despite all knocking back the dregs of their forties) rehearsing for their spectacular comeback gigs at Manchester's Heaton Park is relaxed and informal, capturing a band who don't look like they've spent over a decade sticking their tongues out at each other. It's almost worth the price of admission just to see bassist Mani's bizarre default expression, like he's trying desperately to get away from the guitar strapped round his neck. And performances at a warm up gig at Warrington's tiny Parr Hall (capacity: 1,100) and the triumphant Heaton Park shows (attendance: 75,000) are the film's highlights, although the latter redefines the term "self-indulgent", with an outing of Fool's Gold lasting about a fortnight.

The problem is that there's little else of interest to anyone above the level of casual fan. Preparations for the reunion gigs are intercut with the band's backstory, but it's a cursory retelling designed for non-devotees. The Roses' myriad ups and downs are largely glossed over in favour of, for example, an overlong sequence in which fans do or don't get tickets to the Warrington show. Sure, we get a glimpse of just how much The Stone Roses mean to some people, and there's a palpable sensation of nervousness before the band take the Parr Hall stage, but such insight is sadly rare. 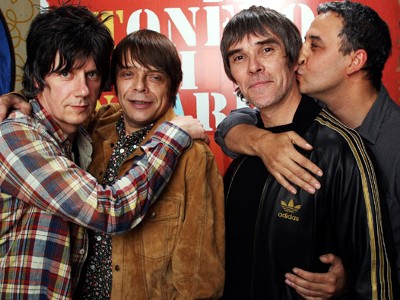 Is anyone else getting a Brokeback Mountain feeling here?


In order to create some drama, the moment when drummer Reni "walks out" of the pre-Manchester 2012 European tour is given undue prominence, and Meadows cuts it together with the band's post-Second Coming implosion in 1996 in an attempt to draw some parallels, but it feels like a desperate attempt to spice up proceedings. By this point you'd rather see the fellas play 'Love Spreads' than watch the love between them dissipate.

Made Of Stone still entertains thanks to Ian Brown's unique presence (the depressingly obligatory Liam Gallagher appearance clearly demonstrates who's King Monkey out of those two) and the barnstorming live performances, and if The Stone Roses are to you what Duran Duran are to me then please, whack another star onto the above rating. But it feels like it's neither one thing nor the other; a missed opportunity for a warts-and-all analysis which would be undeniably fascinating, and for a hair-raising concert film that could replicate the live experience. Still, never mind: the Arena DVD is still available here. "It's a five-star stunner", says The Shiznit.

More:  The Stone Roses  Shane Meadows  Ian Brown  John Squire  Reni  Mani
Follow us on Twitter @The_Shiznit for more fun features, film reviews and occasional commentary on what the best type of crisps are.
We are using Patreon to cover our hosting fees. So please consider chucking a few digital pennies our way by clicking on this link. Thanks!