"We're The Sweeney, shithead. You're nicked!" grunts Ray Winstone after a rather brutal pre-title sequence. With that, Nick Love goes all Batman Begins with his gritty, swear-filled, unapologetic vision of The Sweeney - a far cry from the dodgy trousers, funny haircuts and, I imagine, casual racism and flagrant sexism of the John Thaw and Dennis Waterman days. The '70s, huh? Good times.


For those uneducated with all things Sweeney, Jack Regan (Ray Winstone) and George Carter (Ben Drew) are a pair of unorthodox Flying Squad detectives in the Metropolitan Police. To the exasperation of their superiors, who have grown tiresome of their maverick ways, they shoot bad guys, cause lots of damage, probably do very little paperwork, flick the Vs to the system and spout an arsenal of Cockney slang. If it wasn't for the badge, they'd be criminals. Oh, and their shiny, minimalist office looks more like an Apple Store than a police station. It's safe to say then, that not much has survived the transition from the small screen. 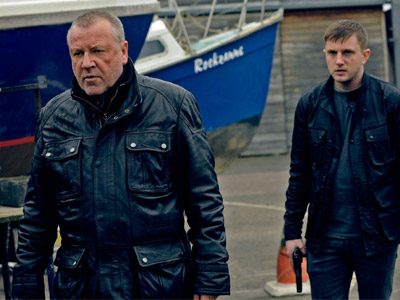 "I got it dahn the old World Ov Levver for a monkey."


The plot has as much depth as a particularly memorable Fast Show sketch – an investigation into a combined robbery and homicide, a run-in with trigger-happy Eastern Europeans and a car chase through a caravan park just about cuts it. Everything else either tails off or gets lost in a onslaught of macho clichés, rude words and incoherent Cockney mumblings. Instead, Nick Love draws The Sweeney's strengths from its set-pieces, strong cast and, believe it or not, cinematography.

Love has given London a very glossy, business class look and is happy to fill his film with important-looking Apprentice-style helicopter shots over the nicer parts of the capital. With the skyline glistening – and The Shard making its movie debut – there's a very 'New York City cop movie' feel to proceedings. It might not be the London we know, but it's the London movies like to take advantage of.

Ray Winstone, meanwhile, is in his absolute element as Jack Regan. This is the most Ray Winstone that Ray Winstone has ever been, swaggering about calling everyone 'slag' and 'guv', using expressions like 'I'm joggin' on'. He's so Cockney it hurts, and it borders on self-parody. I highly doubt John Thaw dropped this many C-bombs. While it's difficult seeing anyone else fill the role, his casting does feel like too safe a bet.

Ben Drew on the other hand is excellent. There's a real unpredictability to his George Carter that makes him a loose cannon and a live wire. While there's a slight hint of humour to his performance, he still looks like he wouldn't think twice about 'cuttin' you up, blud'. Despite being demoted to almost a supporting role in favour of Winstone, he manages to hold his own admirably, and like all good buddy cop movies, the chemistry between the two is convincing enough. With the success of iLL Manors, Drew is proving to be quite the talent on both sides of the camera. 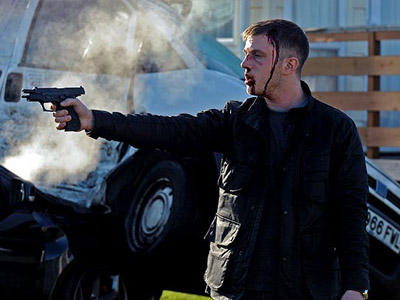 "Mr Dyer, please vacate the set. My orders are to shoot on sight."


However, it's the man behind the camera that shows the most promise. Nick Love has matured greatly as a director, illustrating his ease at reimagining one of the most iconic television series of the 1970s. The Sweeney is his most cinematic film yet and could prove to be the turning point in his career. He shows confidence with a larger budget, working with bigger stars, shooting fast-paced action scenes, stamping his own mark on familiar characters, and most importantly, not casting Danny bleeding Dyer. If Love is going to break America, this is the film to do it, and the additions of Damian Lewis and Hayley Atwell can only help his cause.

The Sweeney is far from perfect. The story is uneven, there are plot holes big enough to fit Ray Winstone's giant digital Bet365 noggin through, there is a heap of unanswered questions left over and the finale is not only an anti-climax but it screams Hot Fuzz. Nevertheless, balanced out with an impressive shoot-out through Trafalgar Square and some slick car chases, it's good to see a proper, no-nonsense, action-packed British cop movie for a change.

More:  The Sweeney  Nick Love  Ray Winstone  Ben Drew  Damian Lewis  Hayley Atwell
Follow us on Twitter @The_Shiznit for more fun features, film reviews and occasional commentary on what the best type of crisps are.
We are using Patreon to cover our hosting fees. So please consider chucking a few digital pennies our way by clicking on this link. Thanks!