The Theory Of Everything

Stephen Hawking is brilliant, isn't he? He’s perhaps the world's greatest mind, he's been immortalised in The Simpsons and millions have read his book A Brief History Of Time. And millions more have lied about reading it. He truly is remarkable; it's about time someone made a worthwhile biopic about the man's extraordinary life. Granted, I didn't see Benedict Cumberbatch's 2004 TV film Hawking but really, who did? And who remembers it? Apart from me. Just then.


Based on ex-wife Jane's memoir Travelling To Infinity: My Life With Stephen, The Theory Of Everything is a deeply personal, delightfully breezy account of their relationship. No easy task when you're also juggling the heavy subjects of motor neurone disease, a testing marriage and extremely complicated physics.

Screenwriter Anthony McCarten lets the three themes play out in perfect harmony. We're never overwhelmed by the scientific equations thrown at us, we feel Stephen's anguish and frustration as his illness begins to take hold of his body, and we sympathise with Jane, understanding the emotional strain she's put under. 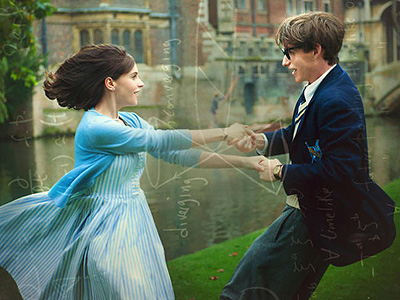 Just another one of Hawking's centrifugal force experiments.


Beginning in Cambridge in the early 1960s, we meet the young Stephen Hawking (Eddie Redmayne) as he embarks on his PhD. He's a confident young man, sure of himself with a cheeky, if slightly mischievous, glint in his eye. And his blossoming relationship with Felicity Jones' arts undergrad Jane Wilde has the makings of a fairytale romance as it turns out that this film is as much a love story as it is a biopic.

But already there are early signs of his heartbreaking illness - clumsiness, a wobbly hand, an unsteady walk. When he's tragically diagnosed with motor neurone disease at the age of 21 and given just two years to live, the strong, loving Jane vows to devote herself to him.

Over time, we watch Stephen succumb to his illness. As one walking stick becomes two, and two walking sticks become a wheelchair, he's gradually robbed of his independence, movement, and speech. But crucially, his mind, resilience and sheer determination remain intact. 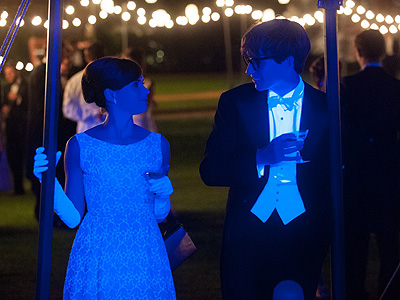 
Throughout all of this, the film never loses sight of Jane and the difficulty that she and her marriage endure. Felicity Jones is an exceptional actress who's been in need of a powerful role for some time, and this film delivers just that. She puts in a mature, hugely emotional performance as Hawking's life-long rock. Despite the pain she goes through, her Jane remains strong and never gives up on a moral obligation to care for her ailing husband.

While director James Marsh has filled his film with a wealth of talent, it's Eddie Redmayne who remains front and centre. It takes a committed character actor to portray such a person like Stephen Hawking and this is his career-defining role, his My Left Foot moment. Redmayne's transformation from the happy-go-lucky student riding his bike through the cobbled Cambridge streets to the world-renowned physicist we recognise today is astonishing – and something the Academy should absolutely lap up.

After all, Marsh's confident direction along with the powerhouse performances from his two leads makes The Theory Of Everything a sure presence when it comes to awards season. And then we really will forget all about Cumberbatch's version.

More:  The Theory Of Everything  James Marsh  Eddie Redmayne  Felicity Jones  Stephen Hawking  Jane Hawking
Follow us on Twitter @The_Shiznit for more fun features, film reviews and occasional commentary on what the best type of crisps are.
We are using Patreon to cover our hosting fees. So please consider chucking a few digital pennies our way by clicking on this link. Thanks!