The Two Faces Of January

Now I don't want you to be alarmed or make any sudden movements, but I've read the book on which this film is based. Like, all the way through. I sort of remember it, too. Which is why I told the guys they could keep their X-Men and their Godzillas, because this week I be Highsmithin'. No, I wasn't invited to the other screenings, but I don't see how that's relevant.


It's true. Before the advent of the smartphone robbed me of the requisite attention span to get through three pages of a book in one sitting, I read just about the complete works of Patricia Highsmith. She is by some distance my favourite author: always found in the crime section but far more 'literary' in style than that suggests; everything she created was full of morally ambiguous men (always men), killing someone by accident then growing ever-more desperate to cover it up, or maybe growing darkly obsessed with some oblivious girl and steadily, tautly insane.

All of which is right up my alley. Plus I'm precisely the sort of cove who likes to imagine himself wandering round western Europe in 1962, drinking Ouzo and smoking expensive filterless cigarettes in a linen suit, so just as The Talented Mr Ripley very much floated my boat, so does The Two Faces Of January. The mood of the two pieces is very similar, with the timeframe used as a backdrop rather than a "Hey! Wasn't it different then?"-style narrative device, giving licence for some gorgeous, meticulous production design by Michael Carlin, and backing up one of the themes Highsmith often returned to: Americans in a cultured foreign environment, uncouth and mucking it all up. 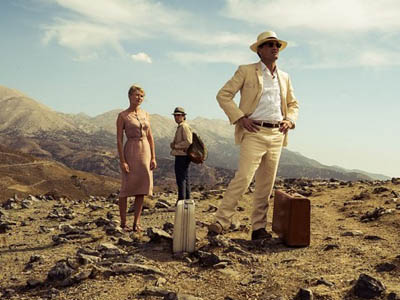 It sags a little in the second act after an Easyjet flight lands them 30 miles outside Athens waiting for the Megabus.


The two male leads embody the usual Highsmith archetype here between them. Viggo Mortensen's Chester MacFarland, a swindling fund manager, is chief mucker-upper, accidentally killing the private detective acting on behalf of Chester's wronged clients and needing to escape Athens fast. Rydal Keener (Oscar Isaac) takes care of the obsession, agreeing to help Chester cover it up because of the sort of listless dilettantism that always characterised the rich young American male in Highsmith's eyes. He doesn't know what he wants particularly, but like Ripley's Dickie Greenleaf the last thing he'll countenance is going home and facing reality. So he's along for the ride and growing more infatuated with Chester's wife Colette (Kirsten Dunst) by the day.

Neither man is particularly hero nor villain; the film doesn't judge or invite you to root for them, and it's this that Hossein Amini has particularly nailed from the book, just as Anthony Minghella did with Ripley. There is a moral relativism throughout Highsmith's work, often heightened by this culture clash of Americans abroad, and so here crimes are committed, grave and trivial, and the camera is just a cold observer without commentary.


Mortensen expertly darts from raffish rich bastard to sympathetic cuckold, his age giving Chester authority over Rydal until the younger man's sexual magnetism in Colette's eyes exposes it hopelessly as he stumbles around, drunk and pathetic. Isaac's, too, is a performance full of rich-boy charm, in his element around the travelling debutantes until the stark reality of being alone and pursued by the police upends him. Dunst has the tricky task of avoiding carrying the can for the whole thing (Highsmith wasn't too forgiving of her female characters, as a rule) as the spoiled young wife happy to look the other way but liable to blow the whole gaff, but invests Colette with an independent streak that allows the idea she's the one true innocent.

All of this is trust turning to mistrust, play and counterplay, back and forth constantly across sunlit veranda bar tables in Panama hats. The screw tightens and tightens, embellished by Alberto Iglesias' urgent score, which manages to make queuing up at passport control unbearably tense.

It is rare to capture Highsmith's spirit on film in this way - since Minghella only Jamie Thraves has come close in 2009's underrated The Cry Of The Owl - but The Two Faces of January stands up both as adaptation and as watchable Friday-night thriller. It deserves to be seen and to spark some more interest in the books of its author. Which I've read. Don't know if I mentioned that or not.

More:  The Two Faces Of January  Hossein Amini  Kirsten Dunst  Oscar Isaac  Viggo Mortensen  David Warshofsky  Daisy Bevan
Follow us on Twitter @The_Shiznit for more fun features, film reviews and occasional commentary on what the best type of crisps are.
We are using Patreon to cover our hosting fees. So please consider chucking a few digital pennies our way by clicking on this link. Thanks!