The Woman In Black 2: Angel Of Death

I saw Woman In Black 2 about a month ago and I didn't make a lot of notes. No, you're unprofessional. But I didn't make a lot of notes because I felt by its third act that it was broadly doing what it had set out to, in the way that a lot of mainstream horror movies tend to quite competently, and that to review it straight would be to retread ground I've already trodden in other reviews. But one interesting thing did occur to me. Read on if you like tedious narrative theory!


You know the bit in every horror film ever, when near the start you're encouraged to believe something supernatural is happening because of the way it's building up the tension, then it makes you jump with the score but reveals it was something innocuous? Like an animal, or a friend playing a trick on the protagonist. The false-start scare, I call it, in a term I almost certainly didn't coin. It feeds your idea that something is not quite as it should be, but allows the character to carry on doing what they were doing undeterred, like inexplicably mooching around a house whose inhabitants were murdered 20 years ago tonight or whatever.

There are a few of these in Woman In Black 2: a bird appearing suddenly at a window, startling Eve (Phoebe Fox), for one. You can see this in the trailer. This got me thinking about its use as a device in horror at large, and I managed to figure out why it's always bothered me: it alienates me as a viewer and restricts my ability to immerse myself in the story. Because it reveals a desire on the part of the filmmaker to make me jump, rather than the character, and therefore draws attention to the film's artifice. 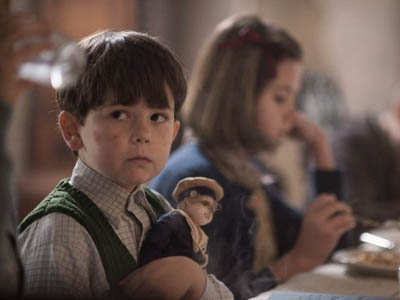 If you will choose a creepy doll with scary eyes as your favourite toy, don't come crying to me when it turns on you.


I'll try and explain. I've noticed a fair bit of fourth-wall breaking in modern horror to achieve a quick "BOO!" (like the final frame of Sinister, in which the ghoulie Bughuul sticks his face in front of the camera just when you think it's all over with, and makes you jump). This effectively introduces the viewer as a character, so it's difficult as it is to remain in the story afterwards. But the false-start scare really takes me out of it, because in a narrative sense it can only be attributed to two possible things.

One, it's a coincidence that this bird has just flapped at the window and startled the character. The bird is not supernatural or possessed by a malevolent force. It's just a bird. Why, then, are we being shown the scene happening when it's insignificant? Because the filmmaker is manipulating something narratively benign in order to trick us into being startled.

Two, the bird is somehow possessed by the Woman in Black, who wants to scare Eve. Why doesn't she just make it peck her eyes out, then, and get it over with? This suggests a desire on the Woman's part to toy with the house's inhabitants; a certain pleasure in eking out the proceedings as emotional torture. This might fit OK with an antagonist like Freddy Krueger, whom it's established has a sadistic streak, but not so much with a demonic spirit who just wants everyone to bog off and leave her alone. Alternatively it suggests a willingness to give fair warning: Hey, I'm an ancient Satanic tormentor, possessed of the spirit of the Devil himself in corporeal form, but that's not to say I'm unreasonable. The bird thing is my way of asking you nicely to leave, if it's not too much trouble, but if not I'll be forced to take it up with the local government ombudsman. 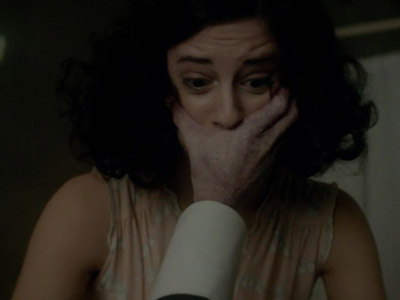 
Either way, it reminds me that I'm watching a film and stops me from losing myself in it. This isn't a criticism of this film; more the genre itself. Horror has its generic crutches more than most, and I'm happy with this as long as the films have some ideas within their well-worn structures. But this one's always an impasse for me.

For its own part, Woman In Black 2 is a well-worked if slightly pedestrian horror film, with a couple of particularly good scares in it, and trades well on the idea of the Blitz as a time of uncertainty to upend its characters and ready them for a bit of a pasting from the Woman. And especially satisfyingly, it is a genuinely female-led film, in which the main protagonist is a woman with proper agency, coming up with all the ideas and battling the dark forces herself. This continues a trend in horror I saw in Mama, and it's great to see. In closing I'd like to say ... wait a minute, I think there's someone downstairs ... hang on, I'll creep down there in the dark to see what it is. Very slowly, of course. It's ... it's ... AAAARGHH! Oh, it was only the dog. Go to bed, Inadvertent Brechtian Alienation Device! Good boy.

More:  The Woman In Black 2 Angel Of Death  The Woman In Black  Tom Harper  Phoebe Fox  Helen McCrory  Jeremy Irvine  Leanne Best  Oaklee Pendergast  Horror
Follow us on Twitter @The_Shiznit for more fun features, film reviews and occasional commentary on what the best type of crisps are.
We are using Patreon to cover our hosting fees. So please consider chucking a few digital pennies our way by clicking on this link. Thanks!