The Woman In Black

At last! Now that the wizarding adventures of Harry Potter have finished, we finally get to find out whether Daniel Radcliffe can act for realsies instead of just looking scared and running away from CGI monsters. Oh.

It's almost a shame for a film that has previously enjoyed huge critical acclaim in its original form as a short gothic novel and then as a long-running play (not to mention an earlier made-for-TV film adap) to have become the post-Potter proof that Radcliffe has some real acting chops. Not to take anything away from the boy who played The Boy Who Lived – if anything, he actually proves himself in this (slightly) more serious film - but it is unfortunate that there has been such a shift in focus away from what this should really be about: whether this is a worthy film version of the story. And yet, sadly The Woman In Black has been cheapened by this rather momentous casting. Not because Radcliffe doesn’t give a bad performance, but because he is so horribly wrong for the role. 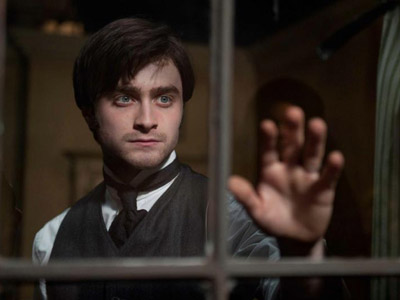 "You guys are gonna CG in the wand later, right?"

The former boy wizard plays Arthur Kipps, a young lawyer in ye olde Edwardian times who is in mourning over his dead wife and, despite this, is still told to go and handle the estate of Alice Drablow, an old woman who died while living in the biggest, spookiest and most isolated house ever to defy the property market. When he gets there, he's met with hostile glares and vague warnings by all the angry villagers who are just about sans pitchforks. Of course, he doesn't listen and decides to go to The Haunted House™ anyway, all while helped by the uncommonly kind and overly familiar Ciarán Hinds, who is grieving the loss of his son many years before. Needless to say, many night-time bumps ensue.

But here is the real shocker: Kipps is a father. Of a four-year-old. Granted, this is only shown in evidence at the very beginning and end of the film but hearing Daniel Radcliffe called 'Daddy' by anyone other Emma Watson in an erotically charged Hogwarts-set dream is just plain wrong. Okay, it's ALWAYS wrong. The fact of the matter is that Radcliffe is 22 years old and looks a little over 17, and yet he has been cast in a role that not only requires him to portray a protective paternal figure, but also to sup a brandy by the fireplace and shoot the shit with Ciarán Hinds as though the old geezer isn't thinking "Damn kids – no respect for village scaremongering and truth-based horror legends." 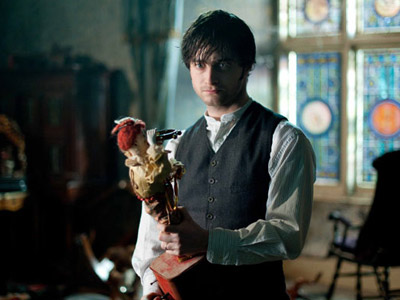 All props supplied from Radcliffe's own toy collection.

Otherwise, the film is sufficient gothic fare with all the usual 'scary' tropes: creepy ghost children, spooky creaks and footsteps, and spine-chilling clown toys that no child in their right-mind would be happy to play with. Anyone who has seen more than three horror films will be able to spot the jumps coming, but when they do, they're still pretty frightful; just when you might expect to see a tiny handprint, instead you get a screaming boy covered in slime. OooooOOOOooooo, etc

The film flags a little at the midway point when you realise that there really is nothing more to this film than seeing Daniel Radcliffe tip-toeing around a big sinister house while disturbing things happen around him. It's an unfortunate by-product of the film being based on such a short story with no real subplot to speak of. At one point, there is a 20-minute scene without dialogue as ghostly goings-on get increasingly alarming. It just all gets a bit...repetitive.

And as Radcliffe looks intrigued because yet another chair is moving by itself, you have to start to wonder why he isn't just running from the place screaming. Kipps says early on that he believes in ghosts, the villagers warn him of the haunted house, even Ciarán Hinds, who is a staunch sceptic in this film, balks at the idea of Kipps going to stay there. At what point after seeing shadowy faces and figures around the supposedly empty rooms does Kipps come to the ONLY POSSIBLE CONCLUSION? 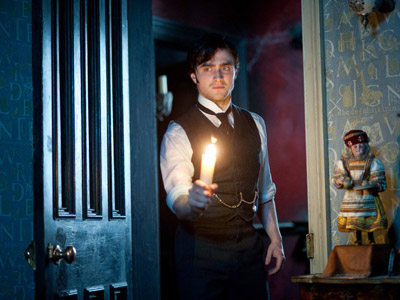 "That scary slime child trying to kill me? It's probably just the wind."

So there's little substance to this very stylish supernatural story, but it will still put some air between bums and seats if you get sucked in by the extremely atmospheric visual effects. Of course, the film would also benefit from some more sensible casting. Even Rupert Grint would make a more convincing father than Radcliffe. He has old, caring eyes.

More:  The Woman In Black  Daniel Radcliffe  Ciarn Hinds
Follow us on Twitter @The_Shiznit for more fun features, film reviews and occasional commentary on what the best type of crisps are.
We are using Patreon to cover our hosting fees. So please consider chucking a few digital pennies our way by clicking on this link. Thanks!