Isn't it nice that superhero movies don't feel the need to take themselves seriously any more? Even Thor, the superhero with the most potential to be a massive space ponce, is – for want of a better word – smashing it. The Dark Knight trilogy was brooding and brilliant, no one is disputing that, but now that Batman has been put to bed, it feels like the real fun can begin. Marvel are on a hot-streak (if you ignore Iron Man 2, Incredible Hulk and shut up) and their Thor sequel sees that string of hits continue; The Dark World arrives in the same vein as Avengers Assemble and Iron Man 3 i.e. laden with lots of fun, lots of laughs and so much charisma that even the minor characters matter. Who'd have thought a throwaway interaction between Thor and Kat Dennings' comic relief Darcy would end up being the funniest exchange of the movie?


Thor remains the tricksiest Avenger to get right in terms of tone: space opera meets superhero action epic meets laff riot is not a pitch you'd want to have to flesh out. Director Alan Taylor – replacing Monster director Patty Jenkins, who bowed out early due to telling "creative differences" – was clearly hired for his experience on Game Of Thrones, and though he does give Asgard more breadth, even he struggles to balance the 'ye olde world' feel with the sci-fi sheen of the wider Marvel universe. 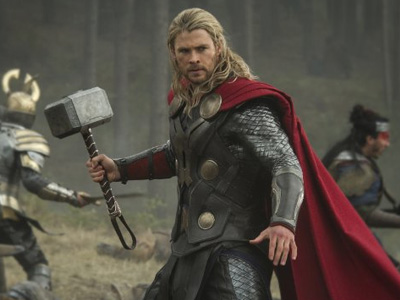 "Stop, for verily, we have entered a time of hammers."


In truth, one early Asgard aerial chase scene – with sleek fighter ships exchanging familiar-sounding laser fire against a backdrop of a verdant space city – has a troubling whiff of The Phantom Menace about it. All it needed was Anthony Hopkins droning on about an Asgardian trade embargo for the effect to be complete. Blame the presence of dishwater dull love interest Natalie Portman if you must; she's by far the least necessary role reprised, even moreso than tiny Tadanobu Asano. Idris Elba's intergalactic doorman Heimdall also feels a touch surplus to requirements this time round.

Have faith: this is no stinker. It's no coincidence that Thor: The Dark World picks up as soon as Tom Hiddleston's Loki is sprung free from space jail to join his brother on his latest quest to save the universe. Practically giddy with mischievous glee, Loki is a rocket up the bumhole of The Dark World, making Christopher Ecclestone's 'Dark Elf' Malekith look rote and one-dimensional as a result. The family dynamic is what made Kenneth Branagh's Thor feel weighty and satisfying, and if anything, that dynamic is better represented here, with bigger roles for mother Frigga (Rene Russo) and a chance to see brothers Loki and Thor on the same side for a change. Their squabbles occasionally threaten to lapse into a glib, buddy movie back-and-forth, but those serious, Shakespearean undertones are never too far from the surface. The funeral scene in particular is heavy with emotional heft, and Chris Hemsworth shoulders it – and indeed the entire movie – with ease, even if it sounds a little like he's forgotten how to do the accent when he's angry.

If Chris Ecclestone's angry elves make for underwhelming enemies – their back-story, delivered by Anthony Hopkins' Odin in an opening monologue, is embarrassingly half-baked – and evil space menstruation 'the Aether' is a MacGuffin so crude it feels like it's been pinched from a JJ Abrams movie, Thor: The Dark World offsets these thundering bores with a little lightening (*groan*). Joss Whedon claims he was "airlifted in" to fix a few scenes, and the gags he added – including, most likely, the one that opened this review – are so clearly his handiwork they practically have his signature on them. In no sane world should a Thor movie match an Iron Man movie for laughs. The Dark World does. 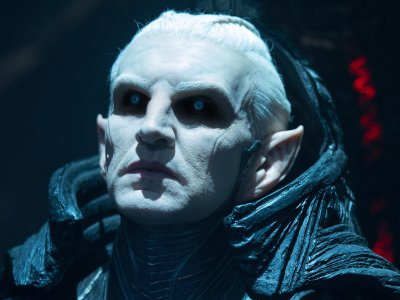 Still pilled off his tits, Legolas stayed up playing PlayStation until 7am.


While the ping-ponging tone pitching back and forth between gravely serious and rib-ticklingly funny does lead to a somewhat jarring experience in places, Thor: The Dark World gets its shit together in its final act: a gleeful, high-energy set-piece that sends Thor and Malekith through all Nine Realms via lots of conveniently placed worm holes, sci-fi jiggery pokery and the Northern Line. It even has the balls to divorce Thor from his mighty hammer for the most part, with Mjolnir's satnav capabilities providing some London-based LOLs.

Though it utilises some extremely spotty logic and some galactic-sized plot contrivances to get it over the finish line, Thor: The Dark World is never less than breathlessly entertaining. The meshing together of Gods, monsters and men is still as difficult a prospect as ever, but once more, Marvel prove themselves up to the task of spanning realms and connecting worlds, with the tantalising prospect of Guardians Of The Galaxy teased in the now-customary post-credits sting. How is space? Space is fine.

More:  Thor The Dark World  Thor 2  Marvel  Alan Taylor  Chris Hemsworth  Natalie Portman  Tom Hiddleston
Follow us on Twitter @The_Shiznit for more fun features, film reviews and occasional commentary on what the best type of crisps are.
We are using Patreon to cover our hosting fees. So please consider chucking a few digital pennies our way by clicking on this link. Thanks!