"He's the boss, he's a pip, he's the championship, he's the most tip top, Top Cat!" When I was young that catchy tune used to fill me with joy. Top Cat was, by a country mile, my favourite Hanna-Barbera creation. Now, thanks to this slap-dash, Flash-animated big screen 3D mutation from Mexico, Don Gato y su Pandilla (as it is in Spanish) leaves yet another childhood memory is in tatters.


As per usual, Top Cat and his gang (Benny, Fancy Fancy, Choo Choo, Spook and Brains) have their typical run-ins with the law. When a new tech-savvy Police Chief starts ruling over New York City like a dictatorial tyrant, demoting good ol' Officer Dibble in the process, he's determined to put a stop to T.C's shenanigans using all sorts of technology and his intimidating robotic police force.

Predictably, it's up to the feline heroes/pests and their old police chum to put a stop to this reign of terror. Because you see, apparently the most pressing matter for the Police Chief of one of the biggest cities in the world is to stop stray cats loitering in alleys. 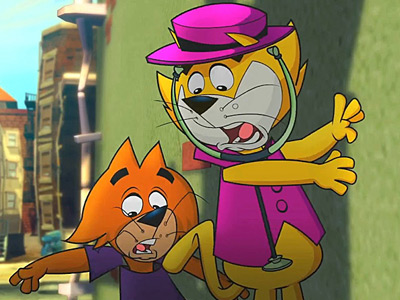 "Aww dammit. Tell Benny to stop going in the alley, and to see a vet."

The look and sound of Top Cat is present and correct. In fact, the combination of hand-drawn 2D characters set against a CGI 3D New York gives the film a distinct feel and the classic cartoon look is maintained. The problem is a lack of heart and soul. It looks like Top Cat, sounds like Top Cat, but it doesn’t feel like Top Cat. It's as if a Mexican film company has taken an iconic American cartoon and slapped together a budget version... oh, wait, that’s exactly what’s happened.

It does beg the question why such a well-loved Hanna-Barbera character was passed by American studios, picked up by Anima Studios down Mexico way and made, by the looks of it, on the cheap. Released in Latin America last September, it managed one of the biggest box office openings in Mexican cinema history. On the flip side, it still hasn’t had a North American release date. Those Mexicans need a lesson in quality cinema. 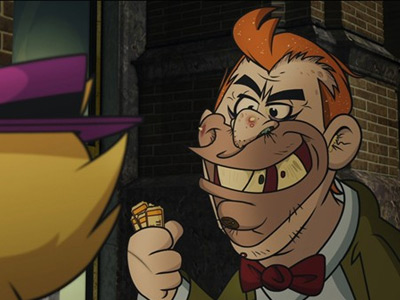 Also they need to update their views on the Irish

Putting the politics to one side for a moment, Top Cat still isn't a very good film. Plot-wise, the paper-thin story goes nowhere, lacks ideas and quickly grows tiresome. In one instance the screen goes black only for Benny to say "oh, that's a lunar eclipse. Don’t worry, it'll be over soon". When it is, he carries on his conversation and the eclipse isn’t mentioned again. Even at 90 minutes it drags like a cat pulling its arse across the carpet.

I like to think there's a message hidden somewhere about our over-reliance on computers, technology and CCTV, and how a machine could never replace a human. But I think I'm just clutching at the straws of reasoning. Kids unfamiliar with the cartoon will no doubt get a kick from the hi-jinx, but anyone with fond memories of the original will leave bitterly disappointed and question their own tastes as children.

There are a couple of predictable cheap giggles at cats in people clothes but Anima Studios have done the cinematic equivalent of putting a cat to sleep.

More:  Top Cat  Animations  Hanna-Barbera
Follow us on Twitter @The_Shiznit for more fun features, film reviews and occasional commentary on what the best type of crisps are.
We are using Patreon to cover our hosting fees. So please consider chucking a few digital pennies our way by clicking on this link. Thanks!