Captain Jack Harness is back, and he's upgraded from Wales to America. That's like moving from a Croydon council estate to a Jetsons-like future, only with less silver jumpsuits and more bisexuality.


It's been two years since Torchwood last appeared on our screens in what was the third series consisting of just 5 episodes airing over consecutive days throughout the week. While fans probably felt hard done by at the time, what the series showed was that Torchwood works best when telling one big story split across several parts as opposed to single episode monster-of-the-week stories.

But not only did this Children Of The Earth series create a new and improved format for the show, it also carried on the fine tradition of killing off main characters, with Cap'n Jack's long-time lover Ianto biting the bullet. And then the show was left in disarray, with Torchwood HQ blown to smithereens and Harkness and Gwen parting ways, there being nothing left tying them to alien investigations.

Perfect time for a reboot then, and even a chance to start afresh for both the team and a new audience. So this first part of a 10-episode story arc starts with a creepy Bill Pullman, here as a convicted paedophile who has raped and murdered a 12-year-old girl, being given a lethal injection, and subsequently surviving. At the same time, the word 'Torchwood' has mysteriously been sent to all top government organisations, and CIA bigwig crashes his car and gets impaled by a giant pole, only to also stay alive.

As it becomes clear that 'the rules have changed' and no one can die, CIA agent Esther Drummond makes the connection between this supposed miracle and the Torchwood team, and soon enough Jack comes back onto the scene, as men with guns and a helicopter track both him down and Gwen, who has been living under the radar for the past 12 months in a remote part of Wales with her husband and child. The problem is, as everyone in the world now seems to be immortal, the normally immortal Jack now seems to be showing signs of injury. 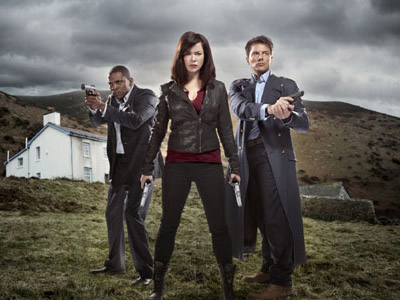 The Wales Elite - always prepared to take down dangerous sheep.

While this first episode does a brilliant job of catching everyone up to speed on the Torchwood concept, especially for those Yanks who haven't seen it before, the really enticing story here is in the miracle itself: what happens when people can no longer die? And what other questions does that throw up?

It is often the case with sci-fi plots that a fantastical story point will often be left unexplored, but already a lot of subsequent issues have been addressed (though none resolved yet). If no one can die, does that mean people are actually healing? At the moment, that doesn't seem like the case, as the CIA chief who had a metal pole thrown into his heart now seems to be in permanent pain.

Also, we understand that this is only happening to humans, and not any other species on the planet, which would imply that mankind is being targeted in some way. Finally, and most importantly, with over 300,000 people dying on average every day, and 500,000 people born daily, there's a pretty serious population boom happening. According to one source, the human race has around 4 months before society crumbles and everyone starts fighting each other for food. Not me - I'm weak, I'd be on the streets scrapping for crumbs in a matter of minutes.

Either way, it's a fascinating idea that, in itself, is enough to keep watching the show, but there is at the moment no clue as to how this turn of events has transpired, so the mystery has yet to even begin unravelling. Plus, this being a suped-up US version of covert spies and guns, we also got to see some pretty great stunts and weapon-play, including a typically over-the-top helicopter chase sequence that ends with a well-aimed rocket launcher. Needless to say, these are production values paid with dollars as opposed to pounds.

The episode suffers a bit from too much cramming though. We have a reintroduction for Jack and Gwen, an explanation of Torchwood, the intriguing premise and some new characters. While writer (and show creator) Russell T Davies does a great job of balancing this out with some good old fashioned explosions and a couple of great UK-versus-US gags, this is still a lot of exposition to take in.

But this is still very much a great start to what looks set to be an engrossing series. And, as the end-of-episode season preview shows, it looks like we are in for a lot more interesting developments, including a new cult on the streets, and the rising celebrity of Bill Pullman's paedophile who, under some dubious legal complications, is freed because "no man is allowed to be tried for the same crime twice" (there's a chance that this is pure fictitious bullshit and would never happen in real life). Plus, how long do you think we'll have to wait for a cloaked, wink-at-the-camera reference to The Doctor? C'mon - you know it's coming.

More:  Torchwood  John Barrowman  Doctor Who  BBC
Follow us on Twitter @The_Shiznit for more fun features, film reviews and occasional commentary on what the best type of crisps are.
We are using Patreon to cover our hosting fees. So please consider chucking a few digital pennies our way by clicking on this link. Thanks!