Trouble With The Curve

I'm not a huge sports film fan and, to be honest, I'm less interested in baseball than practically any other sport. It's pretty much at the bottom of my list, just below dressage and kabaddi. And this movie isn't even about playing baseball - it's about a grumpy old man watching it and complaining about life. It's basically Moanyball. (*high-fives self*)

And yet as many of the best sports films will prove, it's not the game that's important but the relationships between those involved. Moneyball worked, not because any of us gave a fuck about batting stats, but because Aaron Sorkin wrote a cracking script about a man risking everything by trying a new approach to get results.

Which brings me to Trouble With The Curve, a film that is thematically the complete opposite. Here, we are treated to a sentimental tale of how change isn't always for the better: you can't learn anything about baseball from a computer - you have to go out there and actually see some games. Just like Clint Eastwood's Gus has done for all of his career, earning himself a reputation for being the best talent scout there is, even though he is now getting too old for the job.

And, in case we were in any doubt about his age being a problem, the script is only too willing to shove it down our throats for the first twenty minutes. Clint has trouble seeing, even with his glasses on, he keeps scraping his car and he even trips over furniture [insert 'Mitt Romney chair' gag here]. None of which tops our introduction to his character, which sees him struggling to take a piss, all while talking to his penis as though it were an old adversary. At any moment, you feel like he is about to address his cock as 'punk'. 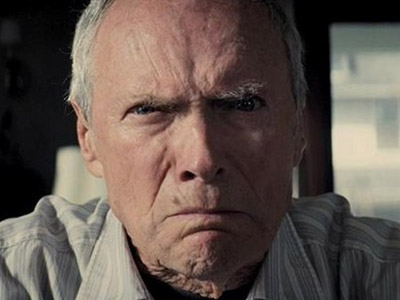 Does your penis feel lucky?

When the story picks up, however, the film becomes less about ol' Clint's attempts to make sure he doesn't shit himself in the baseball stands, and more about him reconnecting with estranged daughter Amy Adams, who has taken an absence from her high-flying business role to make sure dear dad is ok.

Quite why she puts up with him is anybody's guess though, as Clint menacingly growls and grunts through every scene like a particularly irritated Dark Knight. Even scenes that show him displaying an intimate moment of tenderness - such as when he sings You Are My Sunshine to his dead wife's grave - just makes him seem like he's ready to glass someone. One moment in particular, in which Clint pounds his fist down on a diner table shouting "Get me my goddamn cheque!", might as well be pure parody. 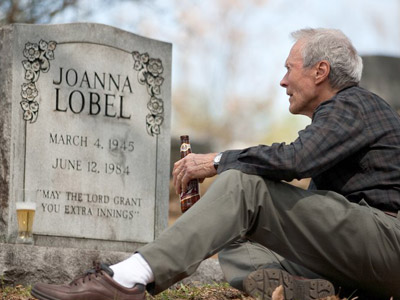 What are you fucking looking at, etc.

And yet Eastwood still remains nothing less than a commanding presence on screen, despite this somewhat badly written character. It's not just Clint either - the story itself revels in tropes and cliches so embedded in the public consciousness that they are now usually reserved for spoof. Take the blossoming romance between Adams' closed off Mickey and Timberlake's 'great guy' Johnny: their time together sees them challenge each other to a drinking contest, then dance in the bar, take a late-night stroll while getting to know each other, dance again in front of a busker and eventually take a midnight swim. It's a shorthand relationship cut and pasted from a hundred other movies.

But the film still works thanks to such endearing performances from these three central leads. The story is overly sentimental, the dialogue is unimaginative and each scene can be picked apart until there's nothing left, but paradoxically, the film is still quite fun and heartily watchable. It easy to be invested in these characters and relationships, when they are so accessible. 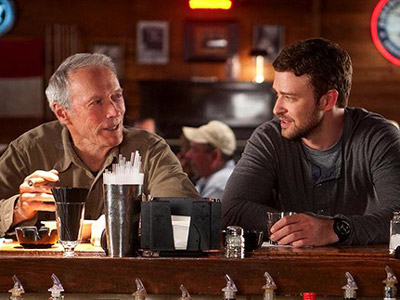 So, even with an eye-rollingly neat ending that conveniently wraps everything up, this is still a film that delivers what it set out to. It might not be groundbreaking, but it's just all very nice. Which is about as much as you could wish for in a film about a grumpy old man watching baseball and complaining about life.

More:  Trouble With The Curve  Clint Eastwood  Amy Adams  Justin Timberlake  Robert Lorenz
Follow us on Twitter @The_Shiznit for more fun features, film reviews and occasional commentary on what the best type of crisps are.
We are using Patreon to cover our hosting fees. So please consider chucking a few digital pennies our way by clicking on this link. Thanks!