As the trial of Rebekah Brooks and Andy Coulson rumbles on at the Old Bailey, not even the halls of Shiznit Towers are free from corruption or the grim face of malign editorial influence. "Please don't give it more than three stars," I was instructed by the editor of this organ, Mr Alistair Gray, in response to my email expressing how much I'd enjoyed Vendetta. "Or I'll have to close the website." But I refuse to be silenced. Vendetta is a four-star film, and I hereby stake my journalistic reputation on it. That's how you spell 'journalistic', right?


Every now and then you sit in film screenings surrounded by critics who have decided not to like what they see on the screen. You can sense the atmosphere: it's the work of a director or actor they love to hate, and they're waiting for someone else to be the first to break the silence in the room. One audible scoff at a bit of corny dialogue is all they want, and it means everyone has licence to join in. Many do, and the rest of the film is punctuated by contemptuous laughter.

I don't like this much. It creates a consensus in a group of people who are supposed to be there to form individual opinions. The screening I attended of Vendetta, a British crime thriller about a vigilante Danny Dyer, was one of these, I sensed. But I waited and waited for the first person to break ranks, and to their credit, no one did. Because it was good. 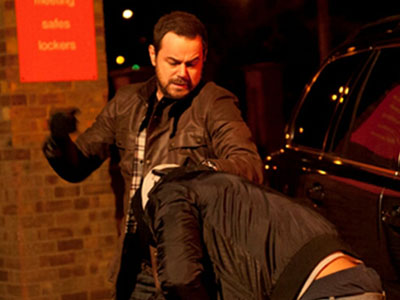 Don't mug me off like I'm some sort of mug, you mug, etc etc


Not a ground-breaking juggernaut of a film, you understand: just a pleasingly well-made one, featuring an excellent performance from its lead. Danny Dyer, of course, was the reason no one wanted to like it: his films have become shorthand for the sort of knuckleheaded British geezercore in which male characters learn life lessons about whether they should stop hitting each other quite so much, and dialogue thuds to the floor like a dead Millwall fan. Dyer himself, I've always maintained, is a gifted actor who has only sporadically found the right material, but has been – quite reasonably – happy to accept a pay cheque for lesser projects in the meantime.

In Vendetta you notice straight away that he doesn't talk much. Listening to Danny Dyer talk is one of the best forms of entertainment I can imagine, but here the effect of seeing him shut his cakehole for a bit is quite pronounced. As a discharged Royal Marine out to avenge his parents' murder, he cuts an intense, haunted figure, and director Stephen Reynolds shoots him frequently in close-up, relying on his star to produce the goods through his reactions. It's rare that Dyer's given this sort of licence, but he thrives on it, and you remember that one of his earliest champions was Harold Pinter, for whom the pauses are just as important as the words themselves.

It begins on familiar territory, the same sort of lament to Broken Britain as Nick Love's Outlaw. While Dyer's Jimmy Vickers is on his way home from Afghanistan, his father George gets on the wrong side of a local gang – a bunch of one-note thugs you could sub in from any London crime drama – while trying to help out someone they're robbing. The gang kills him and Jimmy's mother, and there's plenty said about how ineffectual the police are, and how the right vigilante can mete out more justice in a day than the law can in a year. It's settled, then: violent revenge thriller by numbers. 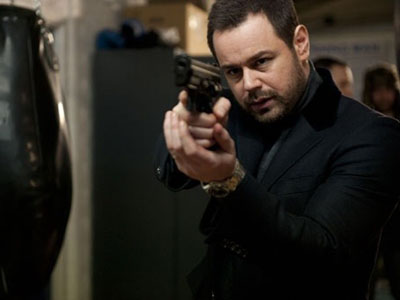 HE'S GOT A FACKIN' SHOOTER, YOU PLUM


Then something else happens. As Vickers goes about picking off the gang one by one in a series of inventively nasty ways, you notice that Reynolds is taking the time to develop his character further, in a way no one bothers to if they're just trying to do another Football Factory. Various military and MOD bods pop up, warning the police how dangerous he is, and suggesting he knows sensitive information he shouldn't. One tells a story of how Vickers went missing on excursion, presumed captured by the Taliban, then showed up back at Camp Bastion three days later without a word as to how he survived. He's being set up as a dangerous, Bourne-like killing machine, and you believe it, because Dyer isn't doing the usual hard-man blather; he's working a subtler angle with a director brave enough to trust him with it.

The intent to build a franchise is obvious, and it merits one. When you know your star is a figure of fun to many and you have the faith to hang an action series on him anyway you deserve credit, in my view. But moreover Reynolds should be congratulated on pushing through a well-told, character-driven story in a field where dumb violence and tits will usually suffice. I don't know whether this will prove a flashpoint for Danny Dyer's career, but it should make it clear: he's not the mug you thought he was.