Shared universes are all the rage now. Marvel, DC, the Potterverse and now get this – there’s even a Royalverse, where Judi Dench is the same Queen Victoria in her new movie as she was in Mrs Brown. There’s even a Netflix spin-off series about her great-granddaughter. It’s crazy – where do they get these ideas? Regardless, in Victoria And Abdul, director Stephen Frears wants us to believe that a crotchety old queen, Empress of a country she never visited, is the most tolerant person in a time when society was decidedly un-woke. And it’s all because she wants some hot young D.


Four years since losing her other best friend (and incredibly, twenty years since Dame Judi first played the role), Queen Victoria and everyone around her are waiting for death to knock upon her door. That is until a hunky young Indian clerk called Abdul (Ali Fazal) presents her with a gift at her golden jubilee and she stays awake long enough to catch his eye. "I thought the tall one was incredibly handsome," she sighs, and so Abdul goes from serving wobbly jellies to Her Majesty to eventually becoming her spiritual guide (or munshi), all to the horror of her court and to the delight of the audience. 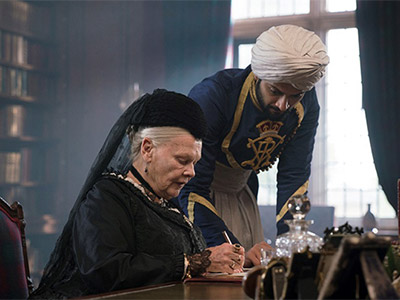 "Wobbly jellies, ma'am?" "Hey! Keep your eyes on my writing!"


Bollywood star Fazal is dreamy as Victoria’s manservant/munshi, lapping up her attention like an enthusiastic puppy. Tall, dark and handsome with a wholesome outlook on life, he’s a flawless representative of the colonies and you can understand how he makes the Queen swoon. While their non-sexual-but-still-flirty relationship is anything but equal, he remains dutiful at every turn. After Abdul reveals that he’s married, much to Victoria’s obvious disappointment, he tells her she means more to him than his wife. And it’s really hard not to dig their relationship: I haven’t felt so conflicted about wanting to see two people get it on since Jon and Dany started eye-fucking each other in Game Of Thrones.

It would be treason to criticise Mame Hootie Bench in anything she does, and here she is entirely captivating, putting in a thoroughly authentic portrayal as an old woman with an eye for the young 'uns. She’s such a perfect fit it’s impossible to think of anyone else in the role, which makes it just about believable to think Queen Vicky was the least racist person around at that time. As she learns about India from a buoyant Abdul, her entourage is not amused, with Lord Salisbury (Michael Gambon) muttering, "She’ll be wearing a burqa next". 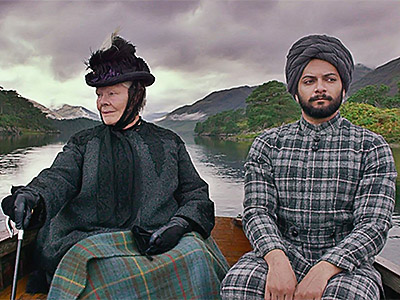 
As Ed astutely pointed out in his Detroit review, we’ve become numb to seeing racism on screen, since we can inwardly congratulate ourselves that at least "we" don’t think like that, and herein lies the problem. Beneath Frears’ film lies a political context buried under genteel humour and a diverting script that lightly riffs on how ridiculous royal traditions are. The less savoury comments about Abdul concerning his religion and the British-Indian relationship are watered down in favour of making this a warm and cosy watch, a bit like distracting your racist nan when she starts on a rant by singing White Cliffs Of Dover. We can forgive because it was a different time, but it doesn’t make it any less palatable.

The movie is more than content to rely on the warmth of its leads and supporting cast than pull on those uncomfortable threads about the British Empire and colonialism. Without this, it’s nothing more than an extra long version of Downton Abbey served with a dose of mango chutney. It’s charming, whimsical, and at times even a joy to watch, just don’t think too hard about what it all means.

More:  Victoria And Abdul  Judi Dench  Stephen Frears
Follow us on Twitter @The_Shiznit for more fun features, film reviews and occasional commentary on what the best type of crisps are.
We are using Patreon to cover our hosting fees. So please consider chucking a few digital pennies our way by clicking on this link. Thanks!