It can be hard to categorise a film like this though. It's a fictionalised true story that straddles the line between comedy and drama. Plus it's about war and guns and stuff, so it's sure to have a message criticising the US government for spreading misinformation or for being terrifyingly inept. And yet it can't be too preachy, because 'comedy', remember?

Quite remarkably, Todd Phillips strikes the balance perfectly, never overstepping the mark either way to maintain an even tone that combines both compelling drama and incredulous humour throughout. Yes, this is the same Todd Phillips whose last film, The Hangover Part III, opened with a decapitated giraffe. And whose film before that - er... The Hangover Part II - was often embarrassingly racist. It seems, with War Dogs, Phillips has reached a level of maturity in his otherwise puerile output, and this is a surprise turnaround not seen in a director since... oh, Adam McKay and The Big Short last year. If this worrying trend of comedy directors suddenly "growing up" continues, we may have seen our very last erection gag on the big screen. 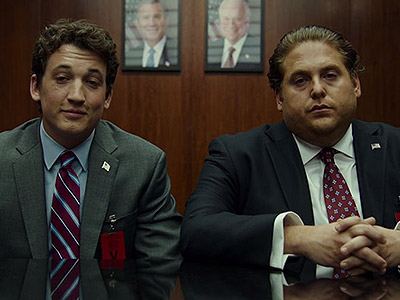 
It's not just to Phillips' credit, of course. Miles Teller finally has a nuanced role to match his stand-out performance in Whiplash. Whereas his belittled drummer boy in that film displayed flashes of mercenary arrogance, his character here succumbs to a more relatable kind of selfishness. As a bored masseuse lacking direction in life, a chance meeting with his old school friend (Jonah Hill) leads to him being lured into the world of gun-running with a promise of big cash payouts, which in turn leads to family strife as he lies to his principled wife about his work. It's a classic tale of being enamoured, then being in over your head, then seeking retribution, and Teller carries the whole story throughout while still matching Hill in the LOL stakes.

Hill, in turn, goes larger than life in his portrayal of Efraim, the all-swagger-zero-charm no-brains behind the operation. With a fuck-you attitude and an instantly annoying high-pitched laugh, Efraim constantly pushes his friend into morally murky waters, and yet Hill still managed to give him an underlying air of vulnerability. He comes across as the fat kid who got bullied at school and now wants to show everyone how successful he has become... while secretly he just cherishes having his old friendship again. 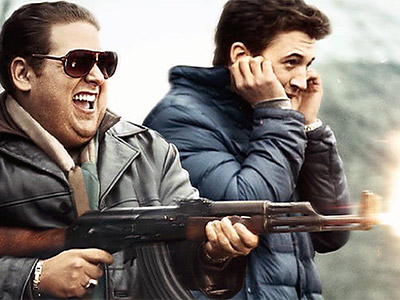 
It all sounds very multi-layered, and it is - this is a film that attempts to make you laugh, cry, grip your seat and immediately check Wikipedia afterwards to verify all the couldn't-possibly-be-true plot developments.

As with all films based on a true story (and to be fair, this one does qualify the claim right from the start with a "kind of"), it is clear that a lot of artistic licence has been taken. Details such as exactly how large the pair's operation becomes are somewhat glossed over, but overall nothing ever feels contrived. And, to be honest, it's easy to forgive minor flaws when there is a greater revelation to behold: Todd Phillips' realisation that the stamp of quality in a movie isn't a cameo by a naked Ken Jeong.

But sure, yes. It's The Hangover meets Lord Of War. Can I have my poster quote now, please?

More:  War Dogs  Todd Phillips  Jonah Hill  Miles Teller  Ana De Armas  Bradley Cooper
Follow us on Twitter @The_Shiznit for more fun features, film reviews and occasional commentary on what the best type of crisps are.
We are using Patreon to cover our hosting fees. So please consider chucking a few digital pennies our way by clicking on this link. Thanks!