At the screening of War Horse I attended, there were people in floods of tears. Floods. Not just quiet, reflective sobbing, but that godless, wretched honking that's usually accompanied by snot and friends who wish they were somewhere else. Me? I didn't shed a single tear – I walked out of there like Moses parting a salty sea. Bear in mind I once got a bit teary because I thought one of my cats was upset with me, and that should tell you a little about me, but everything about War Horse. It's about as manipulative a film has Steven Spielberg has ever made – a movie that's been custom-designed from the ground up to play a sad harp solo on the heartstrings; a story cynically told to invoke as many tears as possible. You'd swear it was bankrolled by Kleenex.


We can't blame Steven Spielberg for this – the culprit is clearly sugar baron Michael Morpugo, whose beloved book inspired the beloved play inspired the inevitably-beloved film. Spielberg's adaptation of the source material actually removes some of War Horse's more ridiculous aspects – it's not told from Joey the horse's point of view any more, and he no longer teams up with Battle-Cat in the climactic battle against the Germans. It's lovingly lensed by Janusz Kaminski, with costume designs straight out of the Hovis Advert Guide Book, and the cast are all perfectly fine – thesps thesping, as is their wont, confident they're in a Serious Steven Spielberg Movie which will have Serious Awards Potential. 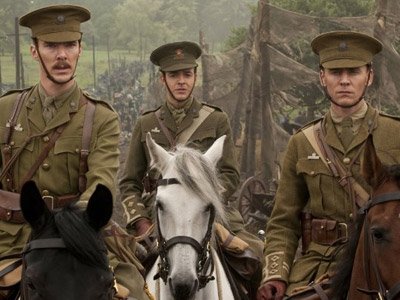 Cheer up, guys! I know there's a war on, but you'll all laugh about it later!


My problem is this: fuck horses. I don't give a shit about horses. They're nice enough animals, don't get me wrong, but we have nothing in common. I've never owned one. I've never sat on one. I've never fed one sugar cubes. I've never even bellowed incoherently at one as a midget thwacked it with a leather strip to make it go faster. Horses and I share a 'We Need To Talk About Kevin' sort of relationship: I look at a stud horse and I just see a really big, stupid dog staring right through me. They're just sexy cows. There's no connection. Basically, I can't make doe eyes at a species which has a bigger penis than me and knows it.

Perhaps I was predisposed to dislike War Horse on this basis alone – I already hate half of the title! Fortunately, I bloody LOVE war, so it was still fair game in my book. Unfortunately, the 'War' sequences are few and far between and moderately ineffective – the Somme scene doesn't pack nearly the same punch as the Saving Private Ryan beach landing, for example – meaning the rest of the movie is all 'Horse': boys, girls and men bonding with animals and learning life lessons that humans are just too stupid to impart themselves.

My main problem with War Horse isn't the frankly ludicrous conceit that horses are capable of empathy, or recognising injury, or avoiding poverty. My problem is that at no point during WORLD WAR ONE does any character in War Horse say: "Yeah, whatever – look, it's just a fucking horse. There's an ACTUAL, PROPER war on at the moment. My mate Tommy just had his lips shot off by Germans. Can we cool it with the heavy petting and perhaps start worrying about the thousands of HUMANS who are dying every nanosecond? Because petting a sexy cow is not high on my agenda right now if I'm being brutally honest." 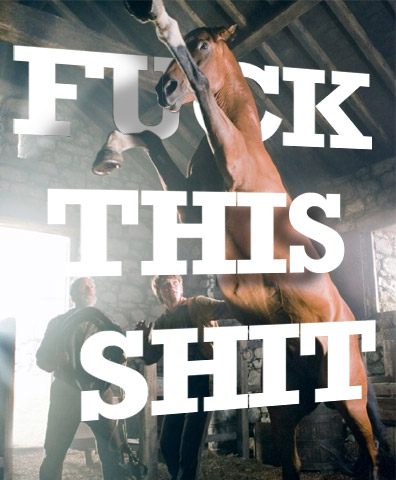 Every character in War Horse – bar the Evil German, who cares not for ze horse's hooves – can't help but comment on how graceful a creature Joey is. "What a remarkable animal," they all say. Jeremy Irvine's gormless simpleton just manages to stop short of French kissing it; Tom Hiddlestone's army major is so taken with it, he draws pictures of it and sends them home; at one point, the Brits and the Germans actually stop having a war so they can talk about how lovely his fur is. Joey is such a remarkable animal, he actually forces a little girl's sickness into remission. FOR SERIOUS. I think. I was rolling my eyes so far back in my head at this point, most of what I remember from this section of the film is skull.

I can't recall the last time I saw a film that rested so heavily on cliché: it's not used so much as a crutch as it is a mobility scooter. Of course the horse will turn out to be wonderful. Of course he'll plough a field that's made of concrete. Of course he'll manage to survive several carefully choreographed battle scenarios. BECAUSE HE HAS LOVE IN HIS HEART. This simple fact is supposed to propel the story and to hold all the narrative strands together. The over-arching messages of acceptance and compassion and mutual understanding. Bull-shit. Horses are big, brown, clip-clopping dung machines that'd just as quickly hoof you in the fud as they would help you yield a harvest or win a war. They're in it for the little rosettes, trust me.

That's assault! That is ASSAULT.


Being a heartless old cynic, it's fairly clear that War Horse is not for me. I scoffed so loudly at the final, maudlin scene – set against a sunset so orange I thought my LSD had finally kicked in – that I had to cover it up as a cough in case the weeping blancmanges surrounding me turned their sadness into rage. Even so, an equine-mad friend of mine who works for a donkey charity (they're pretty much the same thing, right?) thought the film suffered in comparison with the play, so it's probably not just me who disliked Spielberg's relentless feelgoodery. Who'd have thought The Adventures Of Tintin would be the credible one of the double-header?

In conclusion: I would have liked it much more if they put the sassy goose from the farm in a tank and had it win the First World War single-handedly. Now there's an animal I can get behind.

More:  War Horse  Steven Spielberg  Jeremy Irvine  Tom Hiddlestone  Benedict Cumberbatch
Follow us on Twitter @The_Shiznit for more fun features, film reviews and occasional commentary on what the best type of crisps are.
We are using Patreon to cover our hosting fees. So please consider chucking a few digital pennies our way by clicking on this link. Thanks!