Unlike Game Of Thrones, there are no tits and dragons in Warcraft: The Beginning. There are wizards with hipster beards, giant eagles and a progressive orc, though. And in an apt allegory of recent times, an invading horde trigger immigration anxiety amongst a bunch of white people. Rather than rinsing a failing health service and steal jobs, these invaders need mortal souls to… do something. I'm not quite sure. It's all a bit of a blur, to be quite honest with you. I really hope Duncan Jones doesn't read mid-level, sarcastic film blogs, because things are about to get orc-ward; Warcraft is an epic mess of a movie.


Sadly, I'm not one of the 12 million plus people who logged onto Warcraft at its height of popularity, so I know this wasn't made for muggles like me in mind; all the Level 12 Wizards and goblins or whatever can stand down now. Warcraft is probably the first big franchise in recent years which I've experienced with no prior knowledge of the world I'm walking into. What should have been an exciting introduction to another world to get immersed in is instead a nonsensical mess populated by green creatures and mages in lederhosen. 12 million players is nothing to be sniffed at, but there's a strong argument that no one should need to read up on a Wiki before they go to the cinema to understand literally everything that happens on screen. What the flying fuck is a gryphon when it's at home? Throw me a bone here, people.

So much happens within its bum-numbing two-hour run-time, and yet there's little to engage with it. Any neat references to the original source material will go over the head of anyone with less than a day's worth of gameplay under their leather jerkins. I've no idea if scenes set in certain forests or jiggly little creatures that pop up are a shout out to the fans or just something thrown in for the sake of it. The whole thing just ends up feeling like an in-joke that you're not party to, and no one likes to feel left out. 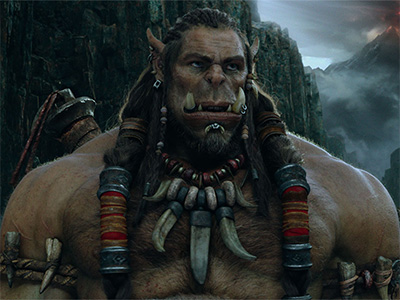 
The basic threads of the plot concerns itself with a fairly liberal orc (Toby Kebbell) not comfortable with the marauding led by evil warlock leader (Daniel Wu) who's using dark magic to seemingly grow more spiky horns out of his back. On the other side of the magical gateway, the humans led by Dominic Cooper (who looks as though he's auditioning for a role, any role in Game Of Thrones) need the help of some magicians to stop his people being used as fuel to power a portal between two worlds. There's a lot of CGI frowning and swinging of hammers on the orcs' side, and nonsensical mutterings on the human side; at one point Ben Foster's guardian Medivh wanders around mumbling words in a spell that sound like he's listing characters from the Police Academy movies: "Hightower, Lassard, Tackleberry".

Pretty much everyone is interchangeable; all the voices of the orcs sound the same and the humans all have beards and look like extras from Lord Of The Rings. Jones strives to show the battle from both sides, but this blurring makes it hard to know which side to root for. The only stand out is Paula Patton's attractive and alluring half orc/human Garona, but mainly because she sticks in the mind because The Knack's 'My Sharona' starts playing in your head whenever her name is mentioned. 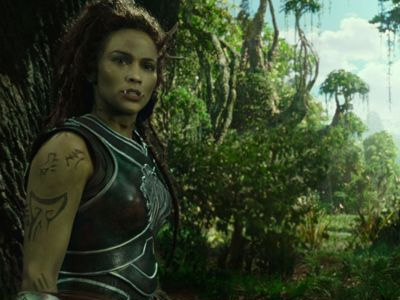 
To give credit where it's due; the effects are good for about 95% of the time, and Jones remembers every 10 minutes or so to make use of the 3D and put a prop front of frame to show a bit of depth. But he drowns under the weight of the world of Azeroth and its gazillion inhabitants, old and new. Sure, it doesn't have the luxury of Game Of Thrones' serial set-up to do a deep-dive of all the interested parties' vested interests, but there are too many characters to really care about. Any attempts to show glimpses of Jones's humour and irreverence fall flat when the rest of the film just takes itself so seriously. There aren't even any references to Chesney Hawkes or a "Leeroy Jenkins" moment that could potentially elevate it into another league.

It's frustrating that a director as talented as Duncan Jones comes up short with his first turn at a big budget movie. An adorable Shrek-like baby sets events up for a sequel, but unless you're already one of the Horde, there's little here to bring you back for more.

More:  Warcraft  Duncan Jones  Toby Kebbell  Dominic Cooper  Paula Patton  Videogames
Follow us on Twitter @The_Shiznit for more fun features, film reviews and occasional commentary on what the best type of crisps are.
We are using Patreon to cover our hosting fees. So please consider chucking a few digital pennies our way by clicking on this link. Thanks!