At a glance, Warrior looks like just another scrapper drama – dudes get into fights, one emerges victorious, life lessons are learned along the way, someone angling for a poster quote compares it to Raging Bull and we all go home with our bloodlust slaked. Shortlist's poster quote – "All the Rockys rolled into one!" – reads more like a back-handed compliment than an enthusiastic recommendation. As it unfolds, however, Warrior reveals itself to be more than just a brainless slugger – like the best boxing movies, it's able to utterly wrap you up in the moment and have you punching the air come its conclusion. Oh, and Warrior doesn't just have punching... it has kicking, too. Face kicking.


Warrior is structured in much the same way as a videogame. Two brothers, played by Tom Hardy and Joel Edgerton, enter a MMA tournament to prove they've got what it takes to compete with the world's best. You have the noble warriors coming from troubled backgrounds, complete with their own righteous motives and special moves; there's the grizzled trainers in the corner, throwing them tips and tricks; each fighter comes across a two-dimensional 'end of level' boss; there's even a final twist before the last battle, not to mention a freeze-frame last shot that feels like it should come with a caption reading 'YOU WIN! GAME OVER!' Then a two-frame bitmap of Nick Nolte winks at you, awkwardly.

The action inside of the octagon is ultra-clichéd, then, but the drama between bouts is far more compelling that you might expect. The movie's first scene sees Hardy's ex-Army tough guy Tommy turn up on estranged father Nick Nolte's doorstep, clutching a bottle of whiskey in a brown paper bag and barely containing his seething resentment. Nolte, evidently a deadbeat dad ("Must be hard to find a woman who can take a punch," jabs Tommy) is now almost a thousand days sober and desperate to right the wrongs of the past, which includes making it up to his other son, Joel Edgerton's Brendan, a family man who teaches physics when he's not getting pounded in the ring. [insert childish joke here]

Hardly blazing a trail in the backstory stakes, you might think, but the three central performances are muscular and capable of flooring you at any given moment. Hardy, bulked up in terrifying pre-Bane villain mode, is fearsome in the ring and just as scary out of it, while Edgerton ably copes with the good guy stuff (wife, kids, annoying pupils, crippling mortgage repayments – all he needs is an Alzheimer's Dad for the hardship jackpot).

However, it's Nolte that does the heavy lifting – with 20 years of regret cut into his craggy features, he acts as Warrior's punchbag, taking such a verbal battering from his own brood he practically sweats sympathy. If the Oscars follow the example of The Fighter from last year, Warrior will get nominations, and it's Nolte who deserves the gong the most. 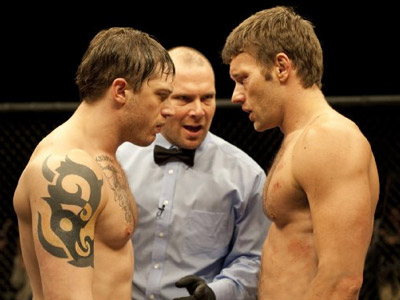 "On my mark, touch gloves, then fight for your father's love. Break!"


Oscar grandstanding will only get you so far in a movie marketed towards MMA fans (aka mohawked 'roid abusers), so I'm happy to report that Warrior is just as brutal as the real deal. Resisting the shakycam so evident with modern action scenes, director Gavin O'Connor pulls in for extreme close-ups as each man grapples, grimaces and groin-punches.

Reminder: this is a 12A – probably the most violent 12A ever (there's a poster quote for you). There's not much blood but every other second someone slams their fist/foot into a solar plexus. Fair enough, some 'fantasy violence' is a lot more gory, but no kids are going to attempt to decapitate an Orc in their school playground; Warrior's easily mimicked violence could lead to an epidemic of broken arms and shattered pelvii. 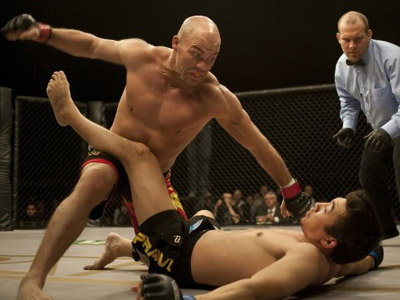 Wouldn't want to be this guy's crotch right about now.


The point is, it's all too easy to get swept up in Warrior's enthusiasm. The music swells, the scene is set, the gloves come off and the energy drinks are chugged – in the heat of battle, Warrior is way more an effective beat 'em up than The Fighter. Come the final showdown, you give a shit about who'll win, and you'll genuinely have no idea who will, even if the trailer did its best to spoil it.

You'll have a fleeting affair with Warrior and its influence dampens when the credits finish rolling, but damn if it doesn't make you want to face-kick the first hobo you see on the bus home.

More:  Warrior  Tom Hardy  Joel Edgerton  Nick Nolte  Jennifer Morrison  Frank Grillo  Fighting
Follow us on Twitter @The_Shiznit for more fun features, film reviews and occasional commentary on what the best type of crisps are.
We are using Patreon to cover our hosting fees. So please consider chucking a few digital pennies our way by clicking on this link. Thanks!