Nine years ago, Rawson Marshall Thurber directed Dodgeball but left the film's funniest scene as alternate ending on the DVD. Mid-way through the final match, one of Ben Stiller's team hits his opposite number with the ball and the game ends – it's incredibly anti-climactic. Vince Vaughn's team looks devastated. Then the credits roll. There's no punchline, they just lost, and now the movie's over. That, in itself, is hilarious. You can understand why the studio didn't want Thurber to use the ending, because it sacrifices the story and the character arcs for a bold gag. Fast-forward to 2013, and don't be surprised if you see a similarly abrupt alternate ending on the We're The Millers DVD; it's a movie with a solid comedic concept at its core but one that is ultimately forced to go through the necessary motions until it rolls to a stop.


The advertised plot for We're The Millers – Jason Sudeikis' pot dealer hires a fake family of misfits as a front while he smuggles an RV full of weed out of Mexico – is used up in the movie's first 30 minutes. The rest of the film's running time is padded out with zany antics (Mexican drug cartels, spider bites, accidental swinging), gratuitous trailer moments (Jennifer Aniston's grim strip show) and humorous misunderstandings. Some of these diversions are more forgivable than others; most of the time, you'll just be marvelling at how threadbare the A-plot actually is. 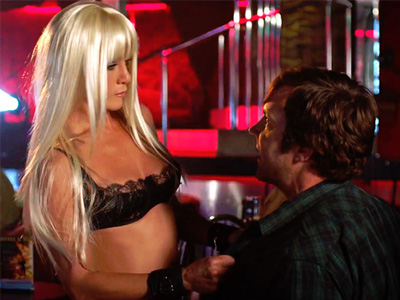 
To be honest, story matters very little in a throwaway comedy of this nature – what matters is that it's occasionally very funny, and it features a talented cast capable of making you forget how slim the narrative pickings are. Jason Sudeikis is great as the straight man surrounded by idiots and psychos, while it's nice to see Jennifer Aniston play a role with a little edge as a stripper with a pottymouth. The still impossibly young Emma Roberts and the now colossally tall Will Poulter both do good jobs of rounding out the Millers, ensuring there's no weak link in the family.

The biggest laughs, however, come from Kathryn Hahn, one half of a vacationing couple the Millers meet on the road. Husband Nick Offerman gets some plum lines ("You two are hot like sexual congress between two mice in a wool sock"), but Hahn slays with every line and pained smile. With lesser comedians in the roles of 'crazy neighbours', the We're The Millers RV would surely have run out of gas halfway through its journey. 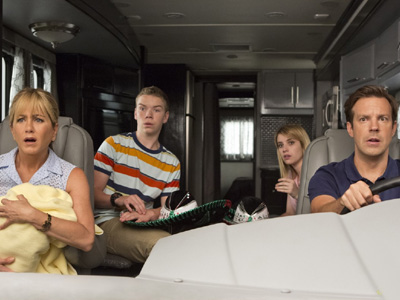 Don't look so shocked, it's just a metaphor, guys.


It's a movie that amuses in fits and spurts, with several scenes sewn together with little concern as to how they flow into one another (one minute the Millers bust free of a gangster's lair in a hail of gunfire, the next they've casually pulled up by the side of the road for the mandatory gross-out cock shot). The highlight is a scene in which Will Poulter's lovable nerd is taught how to kiss, first by his 'sister', then by his 'mother', all the while 'Dad' Jason Sudeikis films it on his phone. You know someone will walk in on them doing it, but the execution of the gag is faultless (Sudeikis' character lustily eating crisps while filming is the grace note).

Sadly, We're The Millers is a studio film and so must tie up everything in a neat little bow. The character arcs must be completed: thus, the douche becomes the caring father figure, the cold-hearted stripper becomes a great role model, the homeless runaway realises she just needs someone to love and the "fucking dork" becomes a self-confident stud. It rounds off the movie as expected, but I have to be honest – I'd laugh my balls off if it ended with the Millers being fed to the gangster's pigs.

More:  Were The Millers  Rawson Marshall Thurber  Jason Sudeikis  Jennifer Aniston  Will Poulter  Emma Roberts  Ed Helms
Follow us on Twitter @The_Shiznit for more fun features, film reviews and occasional commentary on what the best type of crisps are.
We are using Patreon to cover our hosting fees. So please consider chucking a few digital pennies our way by clicking on this link. Thanks!