What to Expect When You're Expecting

There's no end to what Hollywood can monetise. Board games, toys, popular holidays, and now non-fiction books that guide expectant parents through pregnancy. You'll have noticed one constant thread running through the examples linked above: in being straightforward, cynical attempts to cash in on a popular phenomenon with a distinct target audience, they all dispensed with one key tenet of film production. Namely, the idea that you're supposed to at least try to make a good one.

Let's not kid ourselves: 'monetise' is the key word. No one, in making Battleship, the Transformers franchise, New Year's Eve or Kirk Jones' new romcom What to Expect When You're Expecting, had any real intention of making a good film. If one happened to shoot out the other end of the sausage factory then hey, bonus, but that wasn't the point. The point was that there was money-making potential in these things, and in industry terms it's been proven that in applying a certain formula you can maximise returns on them with a movie. In the first and second of these, it's big explosions; in the third and fourth, it's all-star casts. 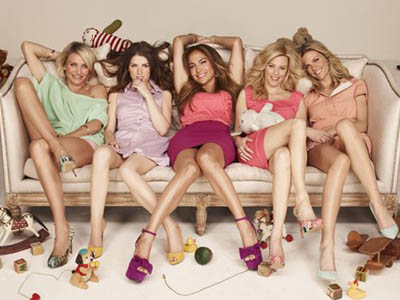 Tsk, leaving toys all over the floor like that. All of them terrible mothers to a woman.

Taking as its cue the wonders and struggles of pregnancy and parenthood and so attempting to tap into the same market that has seen the guide of the same name sell millions in the States since its publication nearly 30 years ago, What To Expect quickly introduces its line-up. Cameron Diaz, a celebrity workout expert, gets unexpectedly knocked up by her partner on Dancing With The Stars; J-Lo and Rodrigo Santoro can't conceive so are adopting from Ethiopia; Elizabeth Banks makes a living giving breastfeeding advice until her first pregnancy makes her re-evaluate; Chace Crawford and Anna Kendrick begin a new relationship because of the accidental bun in her oven.

All of these threads are intercut well enough, though the coincidental links between the characters (like when we discover near the end that two of the women are cousins just so it makes sense that one of them turns up at the same place) are largely unnecessary. But each vignette does little more than second-guess what the writers think we want, and throw enough of it at us that we won't burn the cinema to the ground in protest. So what works? Men always have commitment anxiety in romcoms, don't they? Little dash of that, then. Don't worry that the guy was totally on board with the baby idea five minutes ago; just make him suddenly scared of it so he's got something to overcome, then half an hour later make him magically get over it.

Let's see, what else? Oh yeah, couples definitely have chemistry if they talk quickly to, and over, each other in a way that seems semi-improvised, right? Right. So chuck a bit of that in. Instant chemistry. One scene of that, you've paved the way for a sudden tragedy in which there's mournful piano music, the dialogue is muted and the actors react to the bad news in a slow-motion montage. What d'you mean, you don't care about them? They had a snappy conversation 15 minutes ago! They have chemistry! 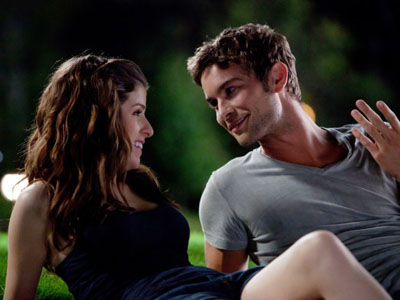 "Cut! OK guys, we'll leave it there and just put the word 'CHEMISTRY' on the screen in big letters instead."

Where a laugh does come (I counted three), it's down to the delivery by one of the better comic performers, mainly Banks, who is always likeable, and Chris Rock, the leader of Dudes' Group; a fathers' syndicate who don't judge each others' parental shortcomings. Though the group is the best narrative idea in the film, and Rock is usually more than capable of wringing a laugh out of a shabby script, he's up against far too much here.

And I'm not even convinced it'll hit the target audience it's intended for: while Banks' climactic rant ("I'm calling it: pregnancy sucks!") is supposed to be a clarion call to ordinary women who resent airbrushed images of beautiful, glowing mothers-to-be on magazine covers, it misses the mark gloriously when you consider that most of the film - in particular, the entire Cameron Diaz arc - has sold us exactly that. Women, I feel cheated on your behalf.

There's no real excuse for any of this. The multicharacter romcom is not a lame-duck genre; it can be done well. Take Love, Actually: smartly scripted, packed full of excellent performances, funny, moving and at times heartbreakingly sad. Why not try to emulate it, rather than just lazily copy and paste its template? Well, that would require the will and creative pride to do so, rather than just to rake in as much cash as possible with minimum effort. Save your money, is my advice. Have you seen the price of nappies these days?

More:  What To Expect When Youre Expecting  Cameron Diaz  Jennifer Lopez  Elizabeth Banks  Anna Kendrick  Dennis Quaid  Chris Rock
Follow us on Twitter @The_Shiznit for more fun features, film reviews and occasional commentary on what the best type of crisps are.
We are using Patreon to cover our hosting fees. So please consider chucking a few digital pennies our way by clicking on this link. Thanks!