The sight of a middle-aged man in a trilby is hard to bear. Particularly when it isn't accompanied by what you judge to be any other changes in his regular attire: just a single hat, borne as a standard on the scalp, saying, Will this do? Am I cool again? The cycle of youth makes us all obsolete sooner or later, and it's hard to accept. And while there's a dignity to aspire to in Don Draper, defiantly immaculate in sports jacket and tie at a party full of hippies, can you blame a man for wanting to get back what he had when he can't pinpoint when he lost it?


Josh and Cornelia (Ben Stiller, Naomi Watts) have reached that point where all their friends have kids and they can't spend time with them anymore in a non-kid context. There's a type of metropolitan, consumer-led hip that they exemplify: nice artsy New York apartment, Apple products up the wazoo, evenings spent scrolling through Netflix without ever really watching anything. Josh in particular is the perfect mark for someone who tells him he's cool. And yet he is: he's a documentary filmmaker, for Christ's sake. And he looks like Ben Stiller.

Jamie and Darby (Adam Driver, the casting agent's proto-hipster, and Amanda Seyfried) seem enviable to Josh by comparison and they become friends. Look! An apartment much artsier in its meticulous disarray. Bicycles! Vinyl! Cassettes! There is a strange ethos in hipsterdom that affects to reject consumerism through a liking for retro and vintage, while simultaneously consuming everything you can, mainly for free. 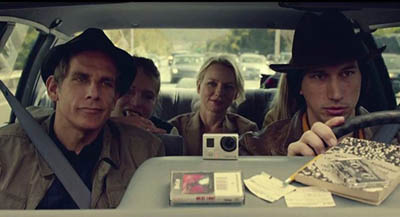 Hats off, guys. No, I mean, seriously.


The "free" part is where the sticking point occurs, and the truth that Noah Baumbach is trying to get at here. Turns out Jamie, a budding documentarian, was mainly seeking out Josh only to get to his father-in-law (Charles Grodin), celebrated in the field. It's not a calculated act, particularly: more the product of a mind used to instant gratification. He's grown up being able to download anything he wants, for free, straight away. Why would people and social advantages be any different? Without grousing about the kids on his lawn, Baumbach's trying to say there's a generational disconnect here. Not around some greater nobility holstered by the elders because they had to work for a living; more that ideas of truth are not fixed. Josh sees documentary as the conveyance of truth. Jamie sees it as a framework to create something, whether that involves lying to the audience or not.

There's something inherently malevolent and creepy about Driver, and directors know it. You could cast him as a young Richard Nixon and he'd nail all the disreputability like it was nothing. Here it's hard to shake off the association with Adam in Girls, especially as he's been cast because of the hipster credentials the show's given him. He is required to exhibit more of an ebullience here though, and he does it very well. Stiller's a past master at playing likeable dupes with something missing in their lives. 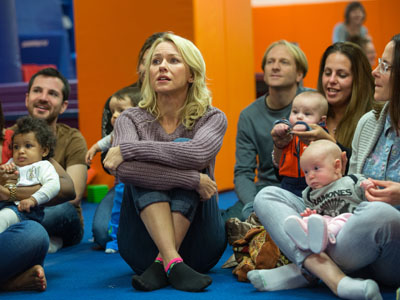 
Naomi Watts wins it, though. There was a danger that While We're Young would pile all the couple's emotions around childlessness and middle age onto her, as is usually the case: the man acts out the void in his life by overindulging in his freedom while the woman is the empty vessel, pining for a baby. But Watts resists it. Her scene as the only non-parent at a friend's baby music class isn't played as bereft; just annoyed that her friends won't come out to play anymore. At a hip-hop dance class with Seyfried, she could play a klutz for laughs but pulls off a more subtle sense of not fitting in but enjoying it.

You don't need to pick a side, necessarily, though While We're Young is probably going to resonate more if you're over 30. Sympathise with who you like, but all Baumbach's trying to say is there's a generation gap here. Try crossing it, trilby on, or just accept that you got a bit older and it's someone else's turn. Take comfort in being one of the last generation of humans who ever had to wait for anything.

More:  While Were Young  Noah Baumbach  Ben Stiller  Naomi Watts  Adam Driver  Amanda Seyfried  Charles Grodin  Maria Dizzia  Adam Horovitz
Follow us on Twitter @The_Shiznit for more fun features, film reviews and occasional commentary on what the best type of crisps are.
We are using Patreon to cover our hosting fees. So please consider chucking a few digital pennies our way by clicking on this link. Thanks!