Sometimes a joke hits too close to the mark, and so it is I cannot ever listen to jazz music without thinking of The Fast Show sketch, Jazz Club, with its bowl-cutted host Louis Balfour introducing chin-stroker acts in straight trousers with names like Charlie ''The Bulb'' Robeson and Soylent Green. That's an entire musical genre desolated, for all time - an entire section of HMV I'll never trouble. But perhaps there is a saviour for jazz; not a musician, but a director, Damien Chazelle - a man who's probably too young to even remember The Fast Show, let alone the old duffers who made jazz insufferable in the first place. Trumpets please!


Damien Chazelle turns 30 this week and I think I speak for every layabout thirtysomething in the world when I say fuck you buddy, who the fuck do you think you are making movies like this at your age? Whiplash is the kind of movie you can only make with the vigour of youth - it's a film delivered, nay, thrashed out, with all the fury of a particularly sweaty drum solo. Whiplash is a movie so confident and so oozing with talent it's terrifying for anyone north of 30 who is yet to commit to realising their dreams of a career in film. He must be stopped at all costs.

There's a pleasing simplicity to Whiplash, an almost elemental clash - the immovable object versus the unstoppable force. Miles Teller has his feet planted firmly as young drumming protege Andrew Neyman, who has the sticks and the stones to make it as a legend on the skins; JK Simmons is his terrifying tutor, who uses fear as a motivator and verbal abuse as his syllabus. Theirs is a fascinating relationship that plays out, fittingly, like a slow-motion car crash: like a rubbernecker staring at a fusion of twisted, burning metal, you cannot tear your eyes off their scenes together. 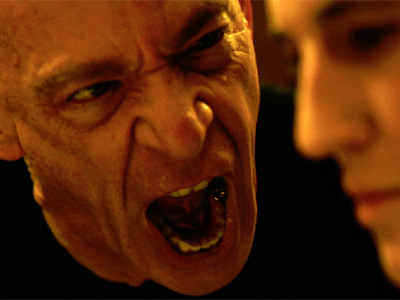 LOOK AT MY NEW FILLING ANDREW LOOK AT IT


Aside from a small turn in Rabbit Hole, officially the most depressing movie ever made, I've never really encountered Miles Teller, but he's astonishing in Whiplash - committed, charming and really very good at drumming or at least moving his hands to look like he's drumming indeed. What you think is going to be a thankless role as goody-goody/hate sponge morphs into something with edge, as Neyman starts to stand up to his mentor and threatens to realise his potential. It's a part that requires Teller to be sweet and innocent but also driven and duplicitous and occasionally downright nasty, but he nails every aspect; the conversation in which Neyman breaks up with his girlfriend to focus on his drumming is a masterpiece of underplayed tragi-comedy.

JK Simmons, on the other hand, gives it a super-liminal turn as jazz teacher Fletcher, a man whose musical achievements are never actually mentioned because the hushed awes that greet his presence renders it unnecessary. He's a bastard, plain and simple: a demented cross between Richard Dreyfuss in Mr Holland's Opus and Pai Mei from Kill Bill. He's ill-mannered. He's shouty. He has a great line in insults (To a fat saxophonist: "Why are you looking at the floor? There's no Mars Bar down there!"). He is also possibly a complete and total psychopath. But Simmons reveals chinks in his armour that let the man shine through the monster, particularly in a disarming scene where Fletcher plays a CD of music from a former student, now deceased - just one of many ambiguous scenes that linger like Chazelle's foot is jammed on a sustain pedal. 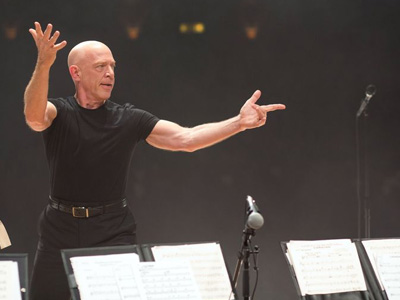 The microphone? It's over (*strains*) here (*flexes muscle to impress nearby lady*)


Speaking officially from my position as 'jazz-cautious', I can now tell you that the performances are the foundation of the movie, but the music makes it. Justin Hurwitz's soundtrack is the kind of infectious playlist that has you rethinking the entire genre - a veritable hand grenade bang in the middle of your Spotify preferences. Though it's impossible to enjoy without looking like a fitting epileptic, it's an incendiary mix of tunes that'd wake the dead: music to ignite your bones. I'm now officially 'jazz-curious'.

Even if 3/4 tempos make you go a big rubbery one, there is still much to love in Whiplash. There is drama. There are heroes, villains and everything in between (by which I mean Paul Reiser). There's even a sort of car chase. It's one of the only movies I've ever seen where music feels like more than just an accompaniment; it's the impossible obsession worth pursuing, the dragon worth chasing. Not many films can capture that electricity and bottle it, but Damien Chazelle is a conductor par excellence. If the final scene of Whiplash doesn't move you in every sense, you are a corpse. If I may sign off with the limited references at my disposal, in the words of Jazz Club's Louis Balfour: Mmmm, nice. Really nice.

More:  Whiplash  Damien Chazelle  Miles Teller  JK Simmons  Music
Follow us on Twitter @The_Shiznit for more fun features, film reviews and occasional commentary on what the best type of crisps are.
We are using Patreon to cover our hosting fees. So please consider chucking a few digital pennies our way by clicking on this link. Thanks!