What are the chances of two 'Die Hard In The White House' films getting released just months apart? And it's always such a shame when this kind of thing happens because, inevitably, whichever film gets released second is the one that suffers. In fact, to Average Joe Cinema, it might even look like this film has COPIED Olympus Has Fallen. Well, let me be the first to assure you that this kind of laziness just doesn't happen in the entertainment industry.


In the land of boil-in-a-bag movie pitches, the 'Die Hard in a…' concept is king. It sits upon a gun-shaped throne wearing a torn, bloodied white vest, a crown made of bullets and a self-deprecating smile. And with good reason. Finish the sentence 'Die Hard in a…' with any intelligible idea and you have a movie that instantly sounds fucking amazing. Die Hard in a circus? Imagine the possibilities! Die Hard in a lift? Claustrocore-iffic! Die Hard in time? WHY AREN’T I WATCHING THAT RIGHT NOW? Die Hard in the White House? Sure, I'm on board. Why not?

Of course, how stringently a film follows the Die Hard formula is, of itself, no guarantee of quality - just look at Die Hard 2. In fact, this film is riddled with some of the dumbest cinematic moments of 2013 so far (except, of course, for G.I. Joe: Retaliation in its entirety). Highfalutin, hand-salutin’ American patriotism is embedded firmly in every scene making for a whole lot of nonsensical babbling about pledging allegiance and war-room squabbling. Meanwhile, a family-oriented Nike Air Jordan-wearing president and his implausibly duty bound guard have so much honour and responsibility pouring from every orifice, they’ll make you feel ashamed for occasionally forgetting to feed your cat.

But then, once Olympus Has Fallen White House Down finds its bare, bleeding feet, we're into much more enjoyable territory, with snapped necks punched faces, glib one-liners and a distinct 'fuck you, Mr Terrorist' attitude. 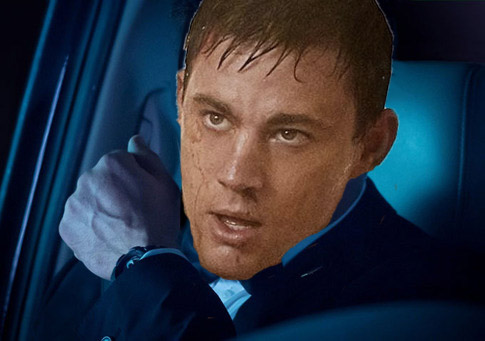 
It takes a while to get there though and, until it does, we're in for a lot of horribly familiar clichés. Mike Banning John Cale is Gerard Butler Channing Tatum's pudgy-faced handsome McClane-a-like, the protector-cum-friend of the First Family but sacked from the presidential guard after a terrible accident President after he’s separated from his daughter on a White House tour.

However, when North Korean American terrorists attack the White House 18 months later and hold Aaron Eckhart Jamie Foxx's wholesome president hostage, they fail to account for the fact that Banning's new boring desk job is pretty much just down the road. Oh, and all of his access codes are still active. Yay for lax security protocols! Cale is a U.S Capitol Police Officer assigned to guard Richard Jenkin’s Speaker of The House, and happens to be at The White house for a Secret Service job interview.

In the action stakes, Banning Cale's one-man crusade is, inevitably, both ridiculous and fun. Unfortunately, before then, we have to watch the terrorists' relentless shockingly easy attack which seems lacking in any real strategy other than to just bulldoze their way in. Gates are crashed Bombs are placed, disguises are worn, weapons are fired and the juddering bodies of special service agents are riddled with bullets for what seems like an eternity. a good five minutes. Finally, Antoine Fuqua Roland Emmerich - a director apparently completely without humour - gives us a final indication that the attack is over: terrorists make it to the roof of the White House a super-slow-motion shot of a torn, discoloured US flag falling to the ground. Unfortunately, I don't get symbolism so I have no idea what that meant. 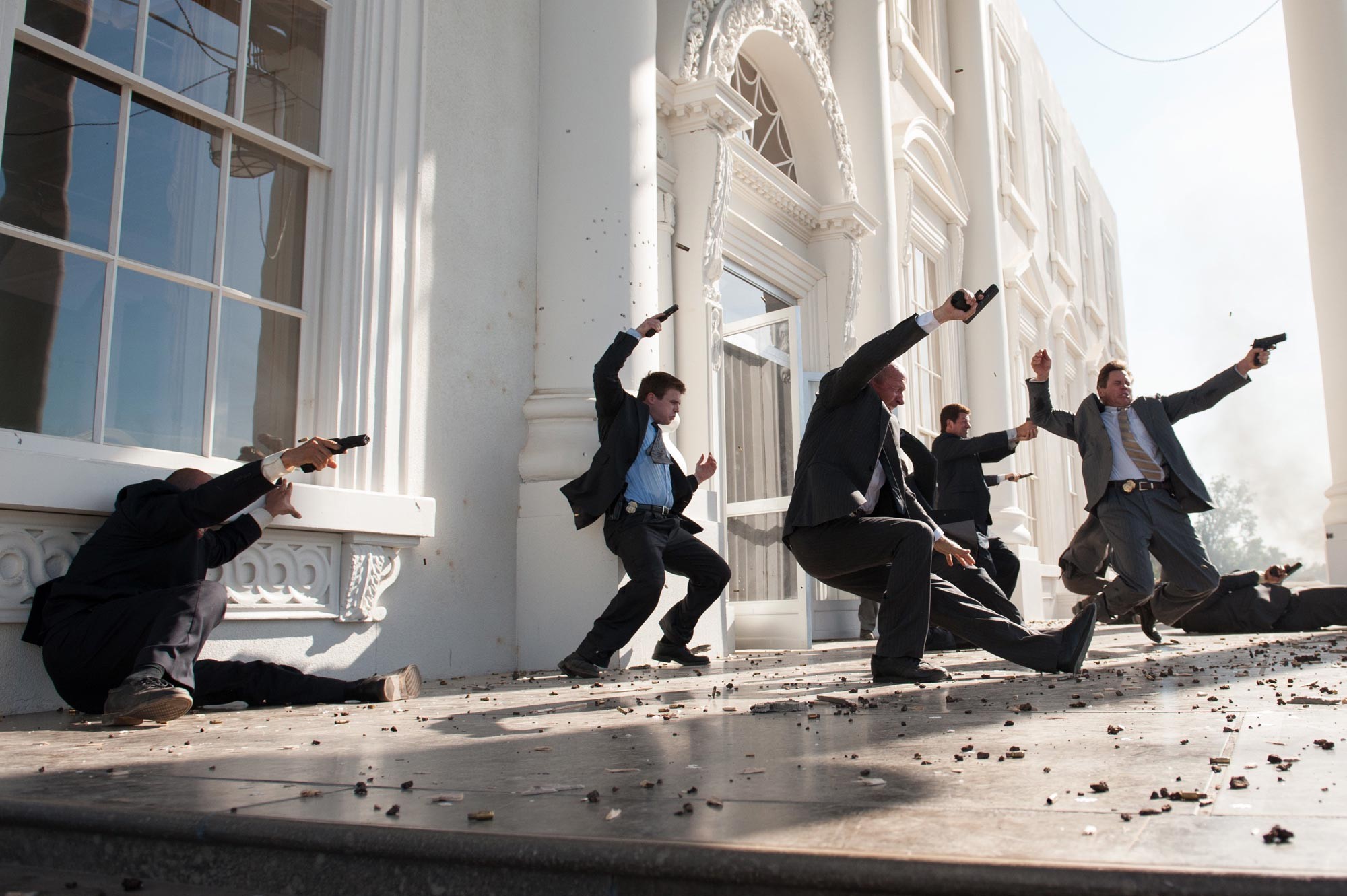 If this picture were a gif, you could watch it for 20mins for the same effect.


Until this point - about half an hour in - the film is a laughably straight-faced depiction of righteous nationalism - the kind that simply shouldn't exist post-Team America. Thankfully, this is when Banning Cale steps up to put things right, despite it not even happening on his watch. His action man credentials may lack the put-upon wit of McClane (aside from one magnificent 'go fuck yourself' moment that may be the best line of the year white vest), but his know-how and familiarity of the White House makes him a formidable have-a-go hero. And there are few cinematic tropes more enjoyable to watch than a resourceful, no-nonsense man on a mission. Especially one who gets hold of an enemy radio and uses it to occasionally taunt the main villain find the President with little-to-no problem.

However, the ensuing action doesn't completely paper over some pretty major cracks. From Morgan Freeman's Michael Murphy’s and Richard Jenkins’ ineffective replacement chief chiefs and Melissa Leo Maggie Gyllenhaal's bizarre reaction to being dragged along the floor back to work, to the forgettable various main baddies, this a film filled with thankless roles. It doesn't help that characters receive no only a little fleshing out whatsoever, with one terrorist's motives literally explained in a rant at the president that consists of a vague "Y'know, because of Wall Street! And the banks wars! And… stuff!" The biggest plot failure though comes with the president's insistence that one final obstacle will prevent the terrorists from achieving their goal. Like Hans Gruber's miraculous FBI, you expect the big baddie to have a trick up his sleeve to overcome this last hurdle, but actually, when the time comes, the entire idea is swept aside like it just ain't no thang problems come when too many bad guys try and take charge and the result leads to a convoluted mess of contradictory incentives and who wants what. 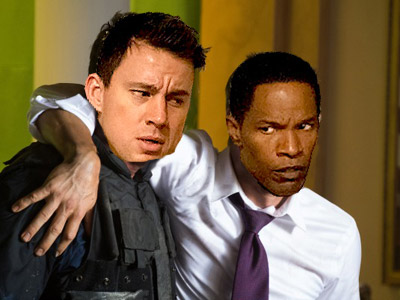 
But it's still the Die Hard formula, right? So all these problems fade away next to some great, solid action and a macho hero saving the day with minimum resources and maximum bravado. In this case, once the film stops taking itself too seriously and gives in to over-the-top entertainment, it becomes a vastly superior movie – albeit one with some head-shakingly stupid moments. If nothing else, it's stiff competition for the second Die Hard In The White House film due this year, White House Down aka How Can The Same Shit Happen To A Different Guy Twice? Olympus Has Fallen.

More:  White House Down  Olympus Has Fallen  Roland Emmerich  Channing Tatum  Jamie Foxx  Joey King
Follow us on Twitter @The_Shiznit for more fun features, film reviews and occasional commentary on what the best type of crisps are.
We are using Patreon to cover our hosting fees. So please consider chucking a few digital pennies our way by clicking on this link. Thanks!