"Wild Bill! 'E's a total nutjob! E'll wallop every last one o' yer!" Misleading marketing fail strikes again, because as much as selling this film like a Guy Ritchie-influenced cockney criminal caper might bring in more dough, it's actually anything but. Sweet, unassuming, surprisingly tender… Ritchie couldn't make this kind of film if he tried.


Marking the filmmaking debut of one Dexter Fletcher (aka Spike off Press Gang - never forget), it would be easy to expect something in the style of his more famous acting output, like Lock, Stock or Layer Cake. But, instead he delivers a story that deliberately defies all the usual tropes and trappings of these gimmicky films. No one's called Bullet-Tooth Tony or Bleedin' Geezer Dave, this is very much a genuine tale of reconnecting with family, but given a light touch thanks to a subtle comic streak running through it.

Charlie Creed-Miles portrays Wild - now turned Mild - Bill who is newly released from prison and determined to never go back, a resolution made more difficult by local gangster Terry (Leo Gregory) who seems determined to keep him on a crooked path. But when Bill finds himself living with his estranged young sons, both abandoned by their mother, he comes to realise that he has an even bigger reason, and responsibility, to stay on the straight and narrow. 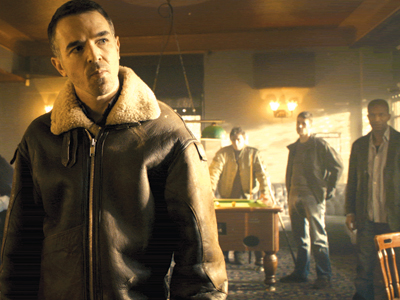 Literally turning his back on crime - YOU'VE JUST BEEN METAPHORED


The set-up may feel a little contrived, but this is a film first and foremost of refreshingly three-dimensional characters, all brilliantly portrayed. Bill struggles to accept that he has a duty to look after his kids, who until now have done a good job of looking after themselves, and Creed-Miles does an excellent job in portraying this tamed bad boy. He reigns in his swagger to play a down-and-out loser who is still a genuinely nice bloke. The one time we do get to see his ‘wild’ side unleashed, it's not a shocking transformation or a rage attack, it's just a clumsy, brutal fight of awkward punches and flailing kicks. He’s just better at it than everyone else.

His sons Jimmy and Dean - played by Sammy Davis and Wil Poulter respectively - are equally impressive, making sure that we never have to make the common allowances for poor child acting. Poulter in particular plays the older Dean with conviction, depicting a disgruntled 16-year-old man-child forced to grow up faster than he ever should have, and with a love story to carry all on his own too. Plus, this is all while apparently having The Rock's eyebrows implanted onto his face. 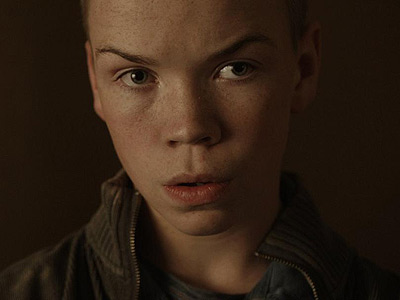 
As a debut for Fletcher, it's simply astounding. In keeping all the usual London gangster cliches at bay, he manages to keep the tone personal and intimate, with the odd 'life is beautiful' moment. There is an occasional tendency to romanticise the shit-hole setting of Stratford just by adding some stirring music over shots of urban banality, but most of the time he gets the tone spot on. There is, for example, one long tracking shot of a paper aeroplane being thrown out of a high-level council estate balcony which acts as an exquisite moment of reflection for Bill as he bonds with his youngest for the first time.

And it can't be said enough that the characters presented in this story are all perfectly complex. There are no obvious motives, no stereotyping and no neatly-wrapped conclusions for anybody. For example, Roxy, a local prostitute who winds up staying with Bill and the kids, doesn't hate her job or spend her life in a drug-addled daze to numb the trauma of fucking strangers for a living. Instead, she just sees it as a way to get money and does it with a smile. I'm not condoning this, you understand, it's just a refreshing take on what could be a cookie cutter character.

The whole ethic of the film actually suits that of a western more than a gangster thriller, with Bill trying to lead a simple life but forced to confront a group of bandits first. Either way though, it's an unusually affecting movie, with pitch-perfect comic moments, a lot of heart, and a beautiful final shot that acts as a crowning achievement for Creed-Miles.

More:  Wild Bill  Dexter Fletcher  Charlie Creed-Miles  Will Poulter
Follow us on Twitter @The_Shiznit for more fun features, film reviews and occasional commentary on what the best type of crisps are.
We are using Patreon to cover our hosting fees. So please consider chucking a few digital pennies our way by clicking on this link. Thanks!